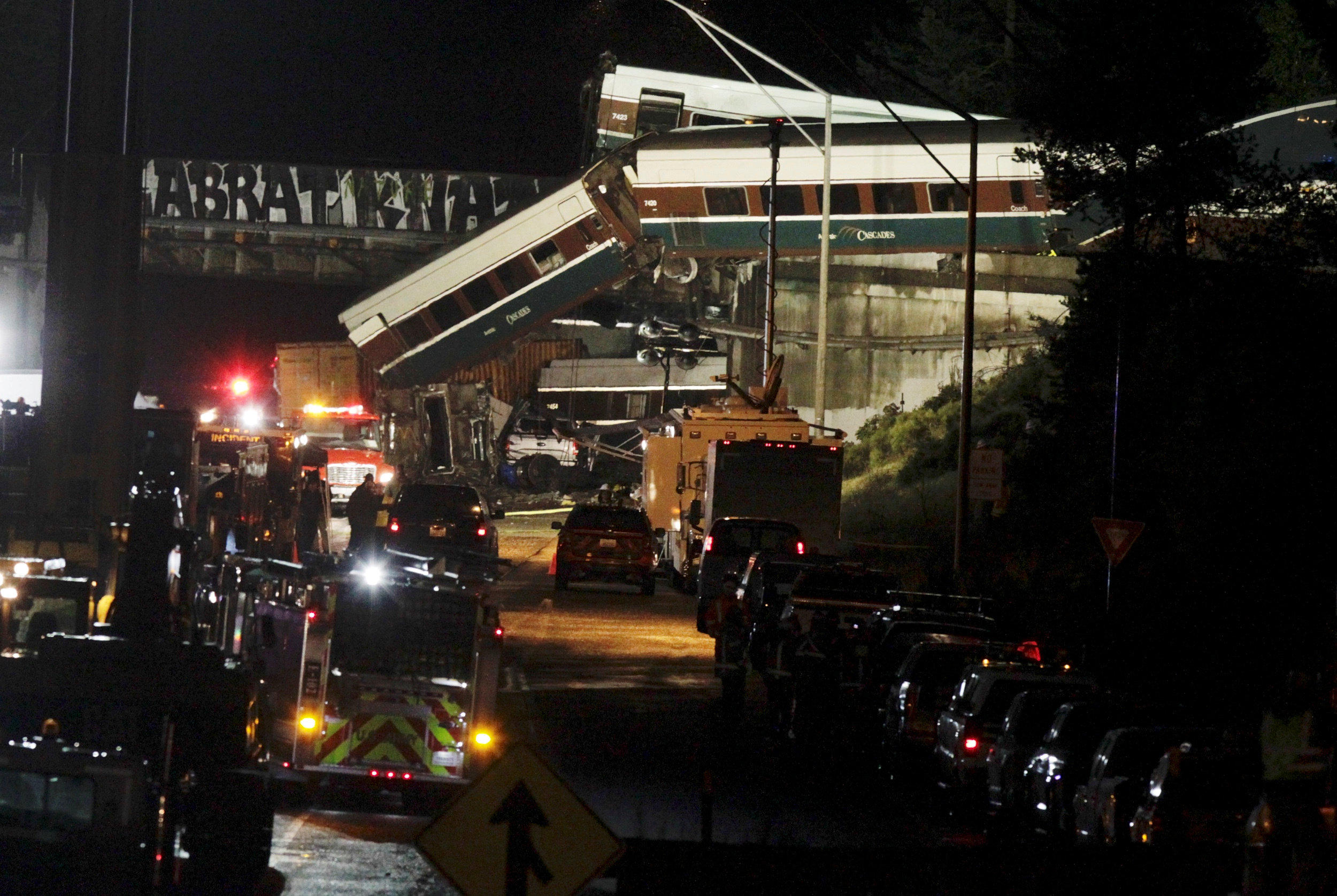 DUPONT, Wash. -- Federal officials confirmed an Amtrak train was hurtling 50 mph over the speed limit when it careened off an overpass south of Seattle, spilling cars onto the highway below and killing at least three people.

Bella Dinh-Zarr, a National Transportation Safety Board member, said at a late-night news conference Monday that information from the event data recorder in the rear locomotive showed the train was traveling at 80 mph in a 30 mph zone when it derailed at 7:34 a.m. Mangled train cars ended up on top of each other - and one hung precariously over the freeway.

Dinh-Zarr said it isn't known yet what caused the train to derail and "it's too early to tell" why it was going so fast.

Positive train control - the technology that can slow or stop a speeding train - wasn't in use on this stretch of track, according to Amtrak President Richard Anderson.

A track chart prepared by the Washington State Department of Transportation shows the maximum speed drops from 79 mph to 30 mph for passenger trains just before the tracks curve to cross Interstate 5, which is where the train went off the tracks.

The chart, dated Feb. 7, was submitted to the Federal Railroad Administration in anticipation of the start of passenger service along a new bypass route that shaves off 10 minutes for the trip between Seattle and Portland, Oregon.

Eric Corp, a councilman for the small city of DuPont near the derailment, said he rode the train with about 30 or so dignitaries and others on a special trip Friday before the service opened to the public Monday.

"Once we were coming up on that curve, the train slowed down considerably," he said, adding that "in no way did it make me feel like we were going too fast."

When the clanging of metal and screeching stopped at first it was quiet. Then came the screams.

After the crash, the injured called out as rescuers - including people who had been in cars on their morning freeway commute - rushed to help. One of the train passengers was Emma Shafer, who found herself at a 45-degree angle staring at the seats in front of her that had dislodged and swung around.

"It felt oddly silent after the actual crashing," Shafer said. "Then there was people screaming because their leg was messed up ... I don't know if I actually heard the sirens, but they were there. A guy was like, 'Hey, I'm Robert. We'll get you out of here.'"

In a statement, the FBI said local police were the primary responders and there was no information suggesting "an elevated risk to Washington residents."

In a radio transmission immediately after the accident, the conductor can be heard saying the train was coming around a corner and was crossing a bridge that passed over Interstate 5 when it derailed.

Dispatch audio also indicated that the engineer survived with bleeding from the head and both eyes swollen shut.

"I'm still figuring that out. We've got cars everywhere and down onto the highway," he tells the dispatcher, who asks if everyone is OK.

Aleksander Kristiansen, a 24-year-old exchange student at the University of Washington from Copenhagen, was going to Portland to visit the city for the day.

"I was just coming out of the bathroom when the accident happened. My car just started shaking really, really badly," he said.

The back of his train car was wide open because it had separated from the rest of the train, so he and others were able to jump out to safety.

The train was making the inaugural run on the new route as part of a $180.7 million project designed to speed up service by removing passenger trains from a route along Puget Sound that's bogged down by curves, single-track tunnels and freight traffic.

The new bypass was built on an existing inland rail line that runs along Interstate 5 from Tacoma to DuPont, near where Train 501 derailed.