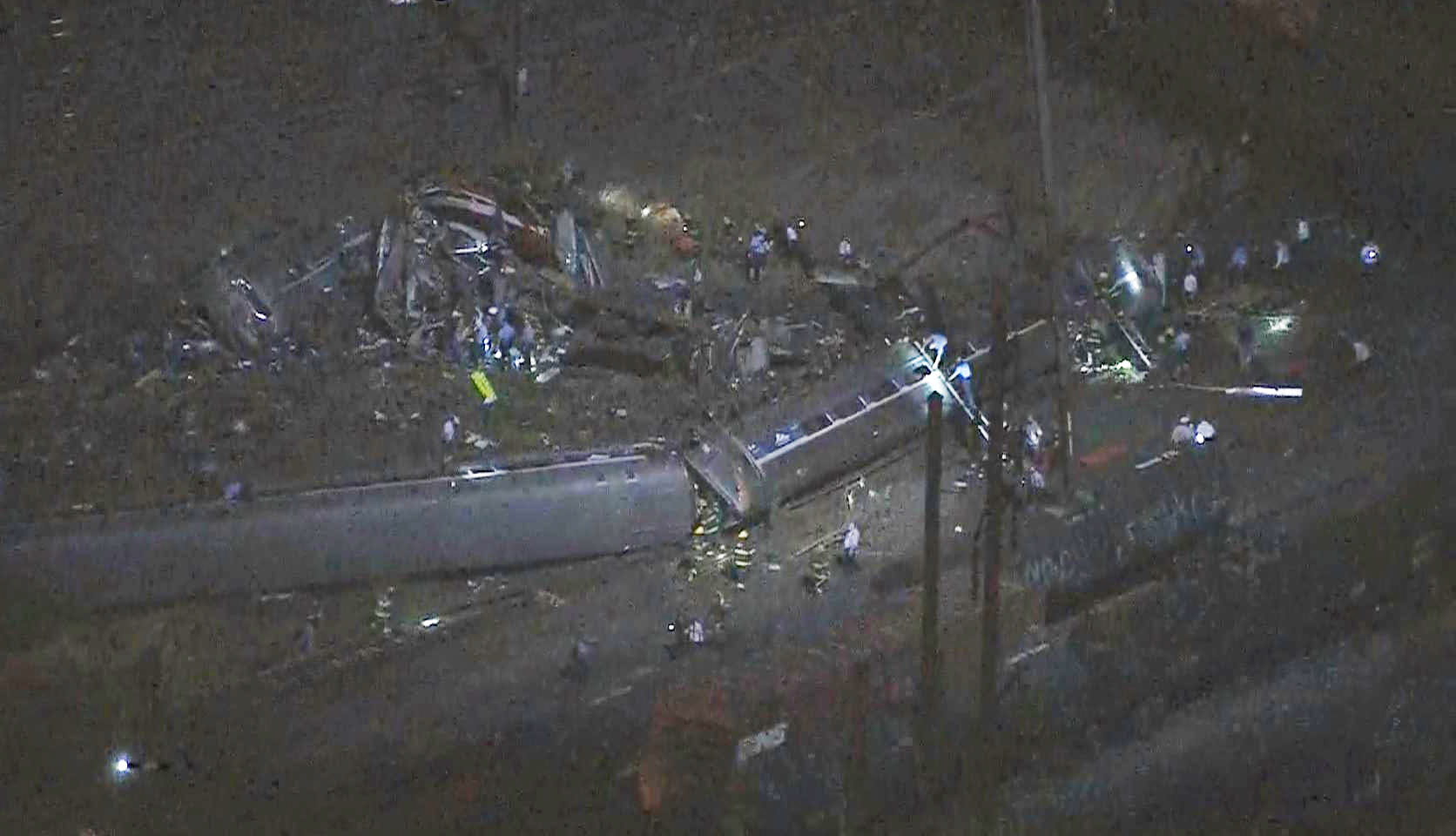 PHILADELPHIA -- At least six people were killed Tuesday night when an Amtrak train headed to New York City from Washington D.C. crashed on a curve in Philadelphia. Eight people were hospitalized in critical condition, and 144 more with injuries of some degree.

Survivors described chaos in the aftermath, with people screaming in the dark, in frantic need of help.

"It just happened so fast. Obviously a lot of debris, lights went out, a lot of screaming," former Rep. Patrick Murphy said. He was on board when the train derailed.

Murphy, an Iraq vet, wasn't injured, so he started helping those around him who were, reports CBS News correspondent Jericka Duncan.

"I just stayed back and just told the people who were bleeding to put some pressure on their wounds that they were bleeding from because you don't want to see those people bleed out," said Murphy, who served in Congress as a Democrat from Pennsylvania's 8th district from 2007 to 2011.

His military training came through in the moment when he didn't want to leave anyone.

"We have an ethic in the military, you know, we leave no one behind and I wasn't going to climb out when there were people still hurting," Murphy said.

People crawled, stumbled and were carried out of the wreckage.

"It's an absolute, disastrous mess," said Philadelphia Mayor Michael Nutter. "I've never seen anything like this in my life."

Nutter said there were 243 people aboard the train, including five Amtrak employees. He said there were at least seven cars in various states of disarray. Nutter stressed that investigators didn't yet know what caused the accident.

"I cannot say that everyone is accounted for at this time," Nutter said just after 1 a.m. Eastern, adding that officials were still trying to match up information from the passenger manifest to what area hospitals were saying.

Anyone looking for relatives was urged to contact Amtrak first, using their Incident Hotline: 1 800 523 9101.

Nutter said crews would work through the night to comb through the wreckage and make sure nobody was still on the train.

In all, more than 140 people went to hospitals to be evaluated or treated after the wreck.

The Federal Railroad Administration said it had confirmed that the engine and all seven cars derailed in the accident. The engine and two cars remained upright, three cars were on their side, one was left nearly on its roof and one was "leaning hard."

The National Transportation Safety Board (NTSB) was sending a "go-team" to investigate the derailment.

CBS News transportation safety analyst Mark Rosenker, a former chairman of the NTSB, said the investigators would immediately begin assessing the tracks, signals and train engine and cars to try and find clues as to the cause. He said the train's event recorder -- much like a commercial airplane's "black boxes," would also be examined to try and piece together the moments before the crash, but warned it could be many months before the cause of the crash was determined conclusively.

Rosenker said there would likely have been only one person in the engine, the train's engineer, at the time of the crash.

All Amtrak service between New York and Philadelphia was cancelled Tuesday night, and the line on which the accident occurred was likely to be closed for at least the rest of the week.

Train 188, a Northeast Regional, had left Washington, D.C., earlier Tuesday in route to New York. At about 9:30 Eastern, as the train entered a bend, it shook and skipped off the tracks. CBS Philadelphia reports the derailment occurred in Philadelphia's Port Richmond neighborhood.

Pennsylvania Gov. Tom Wolf arrived on the scene in the middle of the night, telling the gathered media he was primarily there to lend support to local officials and pledging, "anything the state can do to help, we stand ready to do that."

An eyewitness to the crash told CBS Philadelphia that he watched as the train entered the curve, and said it looked "like the engine just kept going straight." He said it only narrowly avoided careening into parked tanker cars, which an Amtrak employee later told him were full of fuel.

Nutter confirmed the crash occurred at a point where the tracks curve.

Area hospitals quickly filled up with the wounded from the wreck. Hospital staff told CBS Philadelphia that most of the serious injuries they were seeing had been riding in the first two or three cars of the train.

Several injured people, including one man complaining of neck pain, were rolled away from the scene on stretchers. Others wobbled while walking away. An elderly woman was given oxygen.

An Associated Press manager who was on the train said he was watching Netflix when the train started to decelerate, like someone had slammed on the brake. Paul Cheung said everything started to shake and people's stuff started flying everywhere. He said it all happened "in a flash second."

Cheung said another passenger urged them to escape from the back of his car, which he did. He saw passengers trying to escape through the windows of cars tipped on their side. The front of the train was mangled. Cheung described it "like a pile of metal."

Police swarming around the crash site in Port Richmond, a working-class area, told people to keep back from the mangled train. They pleaded with curious onlookers: "Do NOT go to scene of derailment. Please allow 1st responders room to work."

Former Congressman Patrick Murphy was on the train and said he had been helping people. He tweeted photos of firefighters helping people in the wreckage.

"Pray for those injured," he said in a tweet.

A passenger on the train, Beth Davidz was on the phone when when the train derailed. She told CBSN's Anne-Marie Green that she felt the train go off the tracks and that it seemed to be "sliding off."

"It was a scary, slow moment," said Davidz, who recalled climbing out of the wreckage in the dark with other passengers.

Another Amtrak train crashed on Sunday. That train, bound for New Orleans, struck a flatbed truck at a railway crossing in Amite, Louisiana, killing the truck's driver and injuring two people on the train.

In March, at least 55 people were injured when an Amtrak train collided with a tractor-trailer that was stuck on the tracks in North Carolina. Port Richmond, the site of Tuesday's crash, is one of five neighborhoods in what's known as Philadelphia's River Wards, dense rowhouse neighborhoods located off the Delaware River.