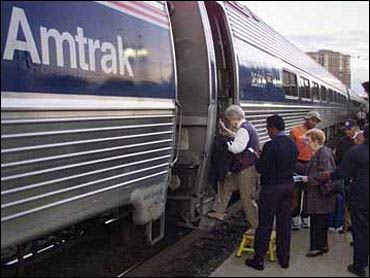 The board of Amtrak is looking for a new president to turn the troubled railroad around, not dismantle it, Transportation Secretary Norman Y. Mineta said Thursday.

Speaking to a meeting of the Association for a Better New York, Mineta, who is also on Amtrak's board, said critics were wrong to think the board was trying to shut the system down.

"Let me suggest that the best indicator of the board's true intentions will be their selection of Amtrak's next chief executive," Mineta told the group of business, civic and political leaders. "Board President David Laney made clear that they are looking for a turnaround CEO and not a liquidator. And I agree."

The board fired David Gunn as president last week, saying he wasn't doing enough to bring major changes to the railroad. Gunn had opposed the board's decision in September to explore breaking off the Northeast Corridor from Amtrak and allowing a private consortium to run it. The Washington-Boston service accounts for the largest share of the railroad's ridership.

Supporters have questioned whether the board had the authority to remove Gunn and said he should be reinstated.

Amtrak has been financially troubled from its start more than three decades ago. An operating loss of more than $550 million was expected for the budget year that ended Sept. 30. The railroad has a debt of more than $3.5 billion.

The White House has said government subsidies of the railroad should stop, but a congressional budget would allocate about $1.3 billion for this budget year. The Bush administration and some in Congress have pushed for moving away from a national rail service to regional services.

Sen. Charles Schumer, an Amtrak supporter, disputed the idea that the board wants to turn the railroad around.