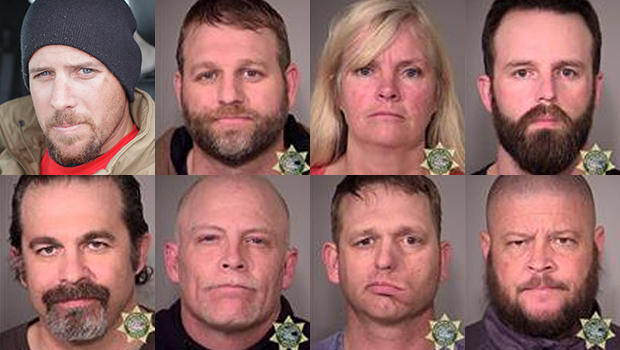 An indictment unsealed Thursday names a total of 16 defendants, including standoff leader Ammon Bundy and other occupiers who were arrested last week.

CBS News' Paula Reid reports that they are all charged with one count of conspiracy to impede officers of the U.S. This indictment is mostly a formality and takes the place of holding a preliminary hearing.

All are accused of using intimidation to prevent federal officers from doing their work at Malheur National Wildlife Refuge.

The indictment says two conspirators traveled to the area in October to warn the local sheriff of "extreme civil unrest" if certain demands weren't met.

The documents say that once the occupation began on Jan. 2, the group brandished firearms to keep officials from carrying out their duties.

Meanwhile, the government has beefed up security at the national wildlife refuge as the standoff has created tensions in the region and shows no sign of ending soon.

Additional security officers were sent to preserves in southern Oregon, Northern California and Nevada as four occupiers remain holed up at the refuge and say they will not leave without assurances they won't be arrested.

"No specific threats or incidents have occurred, but we remain vigilant to ensure employee and visitor safety throughout the region," Jody Holzworth, a Sacramento-based regional spokeswoman for the U.S. Fish and Wildlife Service, said in an email Wednesday.

The occupation began Jan. 2, with Bundy and his followers demanding the federal government turn public lands over to local control. After his arrest during a traffic stop late last month, he repeatedly has called on the holdouts to go home to avoid bloodshed.

Authorities are monitoring the standoff but have not moved in to the federal property, instead arresting the main figures Jan. 26 on a remote road outside the refuge. That's where police shot and killed Arizona rancher Robert "LaVoy" Finicum during a confrontation.

The FBI says Finicum, a spokesman for the armed group, reached for a gun in his jacket pocket. Bundy supporters say his death was not justified.

His death led to protests this week by those supporting the occupation, while local residents rallied to urge the holdouts to leave, further dividing the strained community.

Federal authorities fear those tensions could pop up elsewhere.

Preserves and other sites run by the Fish and Wildlife Service nationwide are being extra vigilant, said Gavin Shire, the agency's chief of public affairs.

"Due to the evolving situation in eastern Oregon, all service stations are on alert and being advised to take appropriate caution," Shire said in a statement.