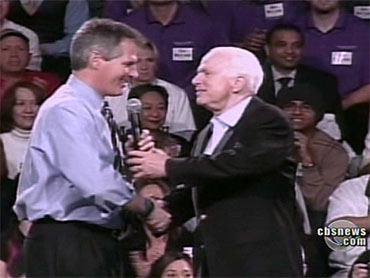 Did someone say "hit the road?"

The American Automobile Association predicts the biggest travel season since 1995, and that's in spite of high gasoline prices.

"We're estimating that nationwide there's going to be almost 40 million people traveling 50 miles or more," AAA northeast spokesman John Paul told CBS radio station WBZ-AM in Boston. "If you were stuck in traffic for Memorial Day, this adds about another 10 million people over Memorial Day traffic."

More than a million travelers were expected to head north from Detroit for northern Michigan this weekend, reports Ron Dewey of CBS radio station WWJ-AM.

"You've got to go away," said one motorist early Friday morning at a rest stop on Interstate 75. "If you don't, you go crazy, right?"

The average price for gas depends on where you live. Triple A says the least expensive gas is in the Southwest, where you can buy it for $1.60 a gallon, while in Hawaii, you could pay as much as $2.10 for a gallon of regular unleaded.

"We are seeing gasoline prices at around a $1.98 average for the entire country," said AAA spokesman Robert Sinclair. "This is about 45 cents a gallon higher than we were last year, but we have gone down slightly since the Memorial Day holiday."

Many travelers took off Thursday. Getting an early jump on the holiday weekend, Conrad Renner went fishing for striped bass on the New Jersey shore, reports Sean Adams of WCBS-AM. Brenner hopes to grill some for the 4th "with some peppers, some onions, sometimes some cheese on it. It's excellent." And because his family beat the rush, 7-year-old Anthony had the ocean virtually all to himself Friday.

Early-birds Jim and Maria left their home in Branford, Conn., at 2:30 in the morning to beat the traffic to Atlantic City, N.J., for a holiday visit to the beach (Maria) and the casinos (Jim).

Americans are still skittish about traveling by air, in part because of the lingering impact of Sept. 11, and the prospect of new terror attacks. However, analysts are seeing some improvements.

"As we get further and further away from 9/11, the fear people have about traveling either by air or in a motor vehicle to some place that might be the target of a terrorist attack is abating," said Sinclair.

Airport managers were expecting record crowds this holiday weekend. Dallas-Fort Worth airport officials expect nearly 2 million passengers, "an 11 percent from last year," said the airport's Ken Capp, making it the biggest 4th of July since Sept. 11 and better even than some holiday weekends before the attacks.

Other travelers said they were lured to flying by discounted fares.

Rob Milford of CBS radio affiliate KPRC reports officials at Bush Intercontinental Airport in Houston are on the lookout for fireworks in luggage this weekend. Even a small firecracker could result in a big fine, jail time, and flight delays.