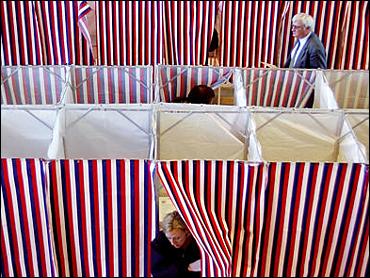 The head of a new federal voting commission has suggested that there should be a process for canceling or rescheduling an election interrupted by terrorism, but national security adviser Condoleezza Rice says no such plan is being considered by the administration.

"There does not appear to be a clear process in place to suspend or reschedule voting during an election if there is a major terrorist attack," DeForest B. Soaries, chairman of the U.S. Election Assistance Commission, wrote in a letter to Republican and Democratic leaders in the House of Representatives and Senate. The Associated Press obtained a copy of the one-page letter.

Rice said the Bush administration, while concerned about the impact of terrorism, is not thinking of postponing the elections, which are scheduled for early November.

Soaries also sent lawmakers copies of an earlier letter he wrote to Homeland Security Secretary Tom Ridge. In that letter, dated June 25, Soaries noted that Sept. 11, 2001, fell on election day in New York and state officials delayed voting until later that month. He wrote that no federal agency has the statutory authority to cancel or reschedule a federal election.

Soaries also expressed concern in the earlier letter that increased election day security could intimidate some voters, highlighting the need for communication between security officials and election administrators. He raised that issue again in his letter to lawmakers.

Soaries said Monday he was scheduled to meet early next week with Homeland Security officials to discuss the issues.

Soaries says he has pestered the White House and Homeland Security with scary "what-if" scenarios for Election Day, but gets the impression they're more focused on protecting the pre-election conventions and guarding against a large-scale Madrid-style attack days or weeks before the election, reports CBS News Correspondent Jim Stewart.

Soaries believes it would take an act of Congress to set up the machinery allowing the postponement or rescheduling of a presidential election – and this close to the election that may be impossible to achieve.

Another problem is that while Congress sets the date for national elections but states run the elections their own way.