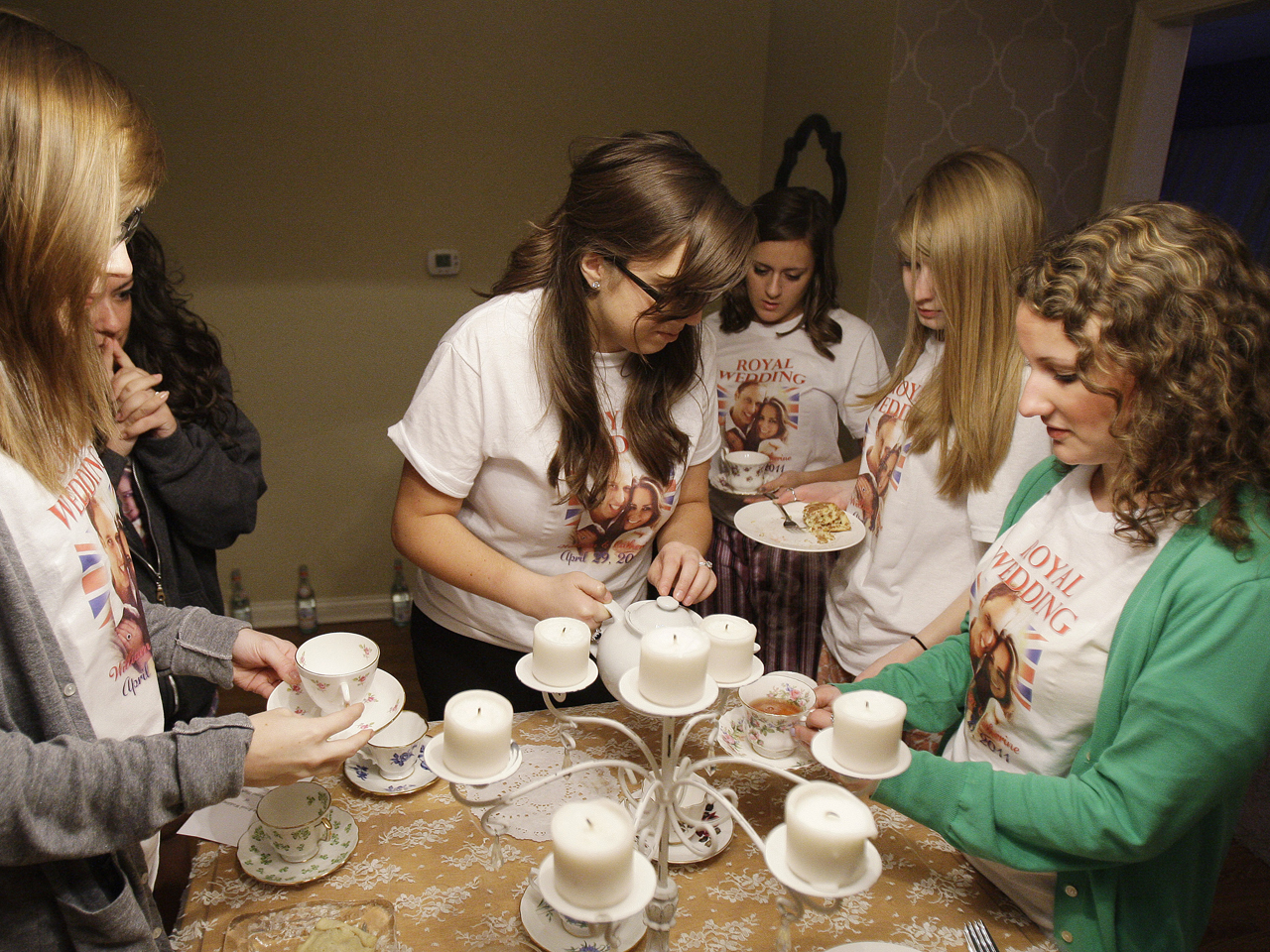 CHICAGO - Bleary-eyed Americans woke before dawn Friday to watch Britain's Prince William marry his longtime sweetheart, Kate Middleton, gathering before screens in living rooms and restaurants across the country to watch the spectacle of a royal wedding and the couple's first kiss as man and wife.

The parties began as early as 4 a.m. on the East Coast, two hours before the wedding ceremony started in London's Westminster Abbey.

Hundreds of people, some of them waving small British flags and wearing fancy hats, watched the wedding on the massive screen overlooking New York's Times Square. They were among an estimated 2 billion people worldwide who watched the event.

Heather Mauro, 28, an occupational therapist from Rockaway, N.Y., came with her mother and aunt. She wore a big round beige hat with gold trim.

"I thought she looked absolutely wonderful," Mauro said. "It brought me back to my wedding. It brought tears to my eyes. Everything was perfect, prim and proper, just like the English do."

A big cheer went up at Walt Disney World's party in Orlando when Middleton emerged from her limousine outside the church and took her father's arm. Hundreds of guests were invited to wear prince and princess attire and watch in the park's Wedding Pavilion with a view of Cinderella's castle.

Angela Vanderjagt, 46, of Orlando, came in her silk pajamas and remembered watching Prince Charles and Diana get married in 1981.

"Diana would be thinking how proud she is of her son and how well he turned out, even with all the pressure," she said of Prince William's mother, who was killed in a car crash in Paris in 1997. "Unlike her, I think he's marrying for love. They're both marrying for love."

About 220 miles above Earth, U.S. astronaut Catherine Coleman made sure NASA broadcast the television coverage of the royal wedding live to the space station where the crew watched it.

Americans also gathered in private homes as royal watchers hosted their own get-togethers with scones and cucumber sandwiches.

In Indianapolis, Jen Barnette, 24, and five of her close friends woke up bleary-eyed, wearing pajamas and white "William and Kate" t-shirts. The women took their seats to watch the royal wedding in Barnette's living room, decorated with an aisle runner, white votive candles and gold-colored chairs angled toward her flat-screen TV.

"This is our Super Bowl," Barnette said.

Michelle Ertel asked her husband to wear his tuxedo and act as a butler for about two dozen members of her women's club in Oviedo, Fla. Two large-screen televisions showed the wedding and Ertel, a 43-year-old communications consultant, asked her guests to each donate a special occasion dress for charity.

When Middleton got out of her limo and revealed her dress, guests started cheering, she said.

"We all just got goose bumps," Ertel said. "Her dress was simple and beautiful. It was amazing and she did not look nervous."

Restaurants and bars from coast to coast hung Union Jack bunting and hosted gatherings to watch the wedding on live TV, complete with royally named cocktails, including "The Windsor Knot" and "The Bitter Queen."

Parties will be going on throughout the day — from early-morning breakfasts to afternoon teas and evening dinners — at American restaurants and bars, said Nina Zagat, co-founder and co-chairwoman of the Zagat restaurant guides.

"Restaurants everywhere seem to be doing something," Zagat said. "It is going all the way across the country. Everybody is taken with the idea of the royal wedding."

AGAINN Tavern in Washington D.C. will be selling slices of cake similar to those the royals will be eating: chocolate biscuit cake

Prince William's favorite — and a traditional royal wedding cake, a fruitcake. Customers who bring a teapot will receive a free appetizer or dessert. Wedding bunting and Union Jack flags decorated The Globe Pub in Chicago, which serves classic British fare including fish and chips and English breakfasts.

Other royal fans watched from the pews of Trinity Church in Lower Manhattan, with its centuries-old ties to the Church of England. A jumbo screen at the altar carried a live broadcast of the wedding, including images of Middleton's gown.

"Very tasteful," proclaimed New Yorker Elise Salinger, 22. "I'm glad it's a classic style, not ultra-modern, off the shoulder or a halter."

For some Americans, the royal wedding is not only a time for celebration, but also contemplation. Dozens of members of Chicago's Episcopal Church of Our Saviour gathered early Friday in the parish hall to watch what they consider a major event in the Anglican religion.

"After the wedding was over with, we used one of the prayers for the royal family," parishioner Roger Gumm said. "It was lovely."

More than two dozen people gathered under the wood-beamed ceiling at The Londoner in Dallas, many wearing hats fit for a royal wedding. Others donned sequined tiaras provided by the pub.

After the couple kissed on the palace balcony one person shouted "Kiss her again Will!" And he did.