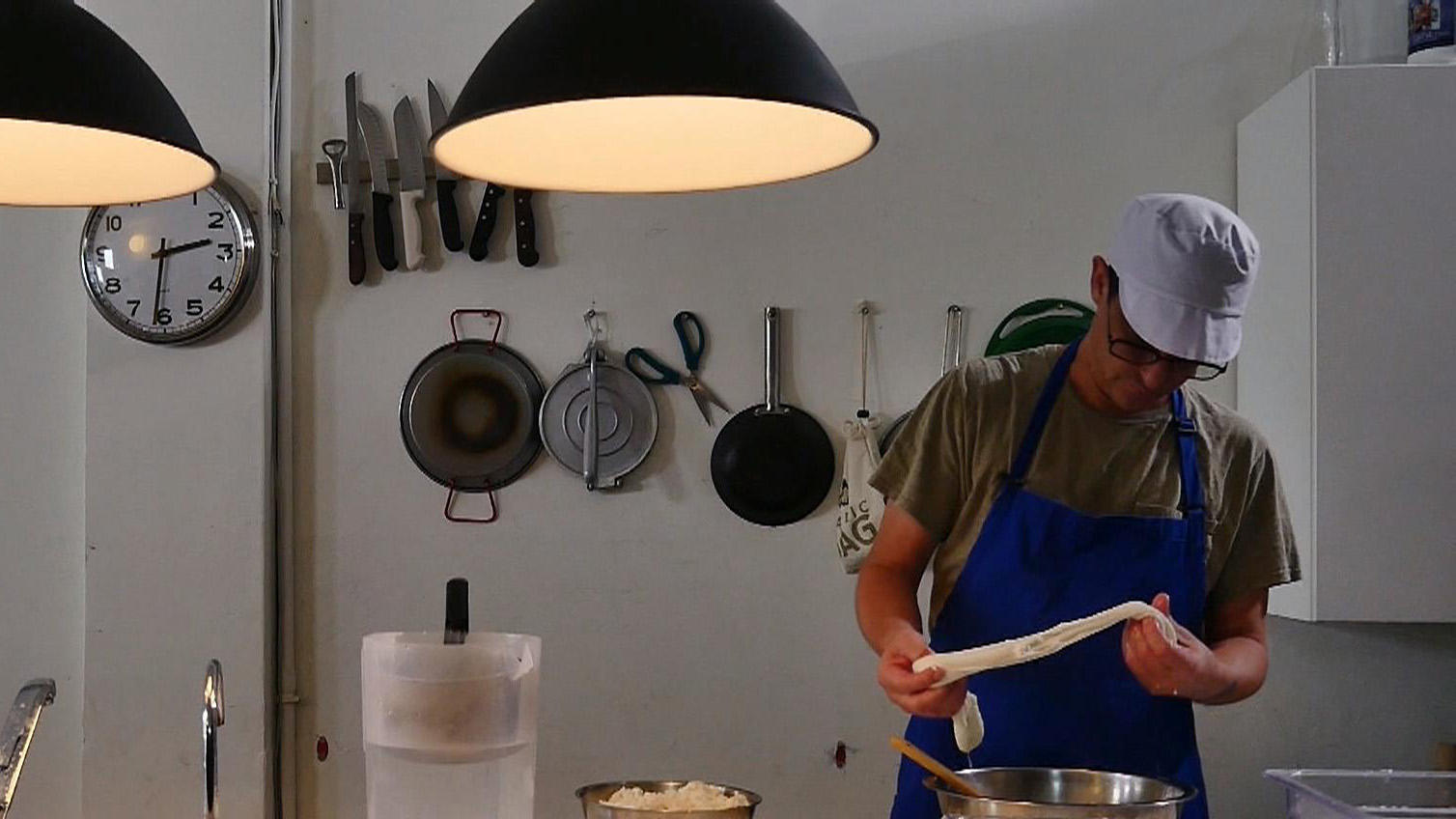 What do you do when you move to a foreign country and no one makes one of your favorite foods? That’s the pickle a Los Angeles foodie found himself in after moving home to Taiwan, where he discovered there was no locally produced cheese.

Whichever food lover first cooked up the saying, “There is nothing in this world more motivating than cheese,” may have had Henry Gerard in mind.

Gerard is living his dream in Taiwan, stretching mozzarella one day and his limits the next. He can certainly take the heat.

“This is mozzarella curd, so this will make a ball,” Gerard explained while going through his process.

Gerard and his wife, Brenda Foung, are cheese makers in Taiwan. When Gerard first moved there in 2009, nobody made cheese. It was all imported and expensive.

“Taiwan, it’s not cheese country. We did not grow up eating cheese,” said Foung, who was born in Taiwan.

So the couple started making cheddar and cottage cheese, among other kinds, as a hobby in their tiny apartment in Taiwan’s capital, Taipei.

“When did you start getting the idea this might be something more? That you might be able to make some money off this?” Albert asked.

“When her sister tasted it and said: ‘You should sell this,’” Gerard said, laughing.

“And when you got that first sale, what did you think?” Albert asked.

But getting enough ingredients -- including raw milk and having it delivered cold and fresh from hours away -- was much harder than they expected.

“They thought we were crazy to want to buy raw milk,” Gerard said.

“The farms did? The dairy farms?” Albert asked.

Many farms turned them away, until they found one where the farmer let them, as they tell it, “look the cows in the eye.”

“They’re happy. You can see them jumping up and down,” Gerard said.

“The cows are happy?” Albert asked.

“Why is that important for you to know that the cows are happy?” Albert asked.

“Because we want our son to eat the cheese. So we didn’t want anything funny inside the milk,” Foung said. “If the cows are happy, their milk must be good. And when the milk is good the cheese that we make just has that natural happiness.”

The cheese may be happy, but it also can get cranky, Gerard said, due to Taiwan’s heat, humidity and atmosphere.

“So it’s like when you’re making bread, beer, any kind of fermentation, if you want to make pickles, totally acts differently here. So anything you read, like anything in the recipe that you read, that’s just like a guideline,” Gerard said.

Today, there’s a lot working well inside their growing upstairs production facility in Taichung, about a two-hour drive south of Taipei. They’ve even brought on an assistant cheese maker, Australian Pete Holmes, to help with all the orders.

Downstairs, Foung often greets customers in the store -- one of six in Taiwan selling cheese from their Dida Creamery.

One couple came to buy cottage cheese and crème fraîche for their restaurant that’s an hour away.

“Why do you like Dida cheese as opposed to other cheese?” Albert asked them.

“I used to work in a food processing factory and understand that it’s very important to eat, to consume food that’s natural and doesn’t have any artificial flavors or additives in it,” the customer said.

Albert got to try some himself.

“All right, what are we tasting first?” Albert asked.

“Oh, wow. It just melts in your mouth,” Albert said.

The couple now makes about a dozen cheeses and butters and Albert and his CBS News crew sampled most of them.

“I was going to say it’s probably the most popular,” Gerard said.

“Where did the name Dida come from in Dida Cheese?” Albert asked.

“Oh, that’s what my son calls me,” Gerard said.

“Dida, instead of daddy,” Albert said.

“When he was a little kid, he would always call me Dida,” Gerard said.

Whatever the name, you can call it a success.

Gerard and Foung also teach cheese-making classes at restaurants and sell directly to chefs. Both Foung, a music executive, and Gerard, a photographer and advertising specialist, have now left their full-time jobs.

“When you quit your job, when you realized that this cheese business is going to really take off, what went through your mind?” Albert asked.

“No, and that’s why I think anyone can do it,” Gerard said.

“Failure is how you learn. If you never fail, how do you learn?” Foung said.

“When I first came to Taiwan, I loved when I would see the whole family in the store. You know, a mom-and-pop shop and you’ve got generations, all the kids there, everyone there working,” Gerard said. “And we just don’t have that in LA, we don’t have that kind of lifestyle.”

“You want your son to be a cheesehead,” Albert said.

“Well I want him to come home and...” Gerard said.

“Work in the store,” Albert added.

There is a slight curl in their business plan, though. Their son, Leo, apparently doesn’t like cheese.

But he’s only 5, so there’s still plenty of time to mold a cheese dynasty.