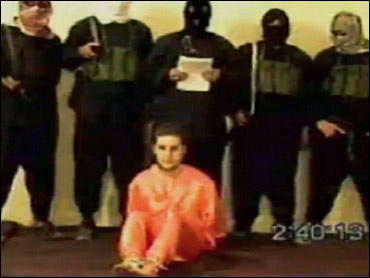 video
posted on an al Qaeda-linked Web site showed the beheading of an American civilian in Iraq and said the execution was carried out to avenge abuses of Iraqi prisoners at Abu Ghraib prison.

In a grisly gesture, the executioners held up the man's head for the camera.

The American identified himself on the video as Nick Berg, a 26-year-old Philadelphia native. His body was found near a highway overpass in Baghdad on Saturday, the same day he was beheaded, a U.S. official said.

The video bore the title "Abu Musab al-Zarqawi shown slaughtering an American." It was unclear whether al-Zarqawi — an associate of Osama bin Laden believed behind the wave of suicide bombings in Iraq — was shown in the video or simply ordered the execution. Al-Zarqawi also is sought in the assassination of a U.S. diplomat in Jordan in 2002.

The Bush administration said those who beheaded Berg would be hunted down and brought to justice.

"Our thoughts and prayers are with his family," White House Press Secretary Scott McClellan said. "It shows the true nature of the enemies of freedom. They have no regard for the lives of innocent men, women and children."

Berg was a small-business owner who went to Iraq as an independent businessman to help rebuild communication antennas, his family said Tuesday. Friends and family said he was a "free spirit" who wanted to help others — working in Ghana, in one example — and that his going to Iraq fit with that ideology. They said he supported the Iraqi war and the Bush administration.

Berg's father said his son was Jewish and had a fringed religious cloth with him, but he did not think Berg wore the clothing in public. Still, "there's a better chance than not that they knew he was Jewish," Michael Berg said. "If there was any doubt that they were going to kill him that probably clinched it, I'm guessing."

U.S. officials had feared the shocking photographs of U.S. soldiers abusing and humiliating Iraqis at Abu Ghraib prison west of Baghdad would endanger the lives of American troops and civilians.

Also, Berg's killing happened amid a climate of anti-Western sentiment, which flared in Iraq after last month's crackdown on Shiite extremists and the three-week Marine siege of Fallujah west of Baghdad. Anger at the United States swelled with the publication of the Abu Ghraib photographs, which continue to stir rage throughout the Arab world.

In the video, five men wearing headscarves and black ski masks stood over a bound man in an orange jumpsuit similar to prison uniforms.

"My name is Nick Berg. My father's name is Michael. My mother's name is Suzanne," the man, seated in a chair, said on the video. "I have a brother and sister, David and Sara. I live in ... Philadelphia."

The video then cut to Berg sitting on the floor, his hands tied behind his back, as a statement was read in Arabic. Berg sat still during the statement, facing the camera, occasionally raising his shoulders.

After the statement was finished, the men pulled Berg on his side and thrust a large knife to his neck. A scream sounded as the men cut his head off, repeatedly shouting "Allahu Akbar!" — or "God is great."

The Bergs, who live the Philadelphia suburb of West Chester, Pa., last heard from their son April 9, the same day insurgents attacked a U.S. convoy west of the capital.

Berg attended Cornell, Drexel, the University of Pennsylvania and the University of Oklahoma, where he got involved in rigging electronics equipment while working for the maintenance department, his father said. He helped set up equipment at the Republican National Convention in Philadelphia in 2000.

While at Cornell, he traveled to Ghana to teach villagers how to make bricks out of minimal material. His father said Berg returned from Ghana emaciated because he gave away most of his food and that the only possessions he had when he returned were the clothes on his back.

Michael Berg said his son saw his trip to Iraq as an adventure that also fit with his desire to help others.

"I would say he was a free spirit, very intelligent," said Nick Fillioe, a sports director at the West Chester YMCA. "He was a real smart guy. He knew a little bit about everything."

Berg's family said they were informed by the State Department on Monday that he was found dead.

When told about the Web site, Berg's father, brother and sister grasped one another and slowly dropped to the ground in their front yard, where they wept quietly while holding each other.

"I knew he was decapitated before," Michael Berg said. "That manner is preferable to a long and torturous death. But I didn't want it to become public."

The decapitation recalled the kidnapping and videotaped beheading of Wall Street Journal reporter Daniel Pearl in 2002 in Pakistan. Four Islamic militants have been convicted of kidnapping Pearl, but seven suspects — including those who allegedly slit his throat — remain at large.

Last month, Iraqi militants videotaped the killing of Italian hostage Fabrizio Quattrocchi, but the Arab TV network Al-Jazeera refused to air it because it was too graphic.

In the video of Berg, the executioners said they had tried to trade him for prisoners at Abu Ghraib.

"For the mothers and wives of American soldiers, we tell you that we offered the U.S. administration to exchange this hostage for some of the detainees in Abu Ghraib and they refused," one of the men read from a statement.

"So we tell you that the dignity of the Muslim men and women in Abu Ghraib and others is not redeemed except by blood and souls. You will not receive anything from us but coffins after coffins ... slaughtered in this way."

Seven soldiers from the 372nd Military Police Company face charges in the mistreatment of prisoners at Abu Ghraib in a scandal that has sparked worldwide outrage. One of those soldiers faces a court-martial in Baghdad next week, the first to go to trial.

The American administrator of Iraq, L. Paul Bremer, said Tuesday that the soldiers accused of abuses would be brought to justice.

"I find the behavior of these American soldiers completely unacceptable and outrageous," Bremer told Associated Press Television News. "I share the outrage of the Iraqi people and the people of the world as to what these guys did."

April 9, when Berg last made contact with his family, also was the day that seven American contractors working for a subsidiary of Halliburton Corp. and two military men disappeared after their supply convoy was attacked on the outskirts of Baghdad.

Two soldiers also vanished April 9. One was later found dead and the other, Pfc. Keith M. Maupin of Batavia, Ohio, was taken captive and remains missing.

In other Iraq developments: