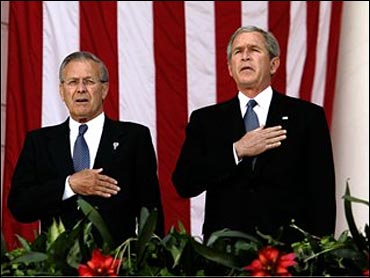 Quoting letters of the fallen from the war in Iraq, President Bush vowed Monday to a Memorial Day audience of military families and soldiers in uniform that the nation will honor its dead by striving for peace and democracy, no matter the cost.

"We must honor them by completing the mission for which they gave their lives; by defeating the terrorists," the president told a supportive crowd of several thousand people at Arlington National Cemetery.

Mr. Bush's remarks come as the U.S. military supports a massive weekend show of force in Baghdad by Iraqi forces aimed at halting attacks by insurgents. The violence has killed more than 700 people since Iraq's new government was announced April 28. The sweep of Baghdad was answered by counterattacks by insurgents; and south of the city, two suicide bombers blew themselves up in a crowd of police officers, killing up to 30 people and wounding dozens.

"Another generation is fighting a new war against an enemy that threatens the peace and stability of the world," Mr. Bush said. "Across the globe, our military is standing directly between our people and the worst dangers in the world, and Americans are grateful to have such brave defenders."

In Iraq, American troops paid tribute to their fallen in the midst of sustained violence. Soldiers at a former palace of Saddam Hussein reflected on the names of some of the more than 1650 who have died there, CBS News Correspondent Thalia Assuras reports.

The president's tribute at Arlington came in sharply different circumstances from the Memorial Day visit Mr. Bush made to the cemetery's Tomb of the Unknowns two years ago, just as the nation's problems stemming from the Iraq war were becoming apparent.

Before his Memorial Day remarks in 2003, Bush had declared major combat operations at an end, the U.S. government confidently predicted that weapons of mass destruction would be found and American generals said troops were in the process of stabilizing Iraq.

At that time, some 160 American soldiers had been killed in Iraq. Today, the total is over 1,650.

Other Memorial Day events across the country didn't go so smoothly.

The town of Bloomsburg, Penn., for instance, canceled its Memorial Day parade — after only one veteran agreed to participate.

At last year's event, not even a dozen people turned out.

The local chapter of the Veterans of Foreign Wars says there's not much interest in the event from either veterans or the public at large. As a result, the VFW has pulled out entirely from the parade and officials decided to cancel.

On Monday, Bush evoked the memories of American soldiers who have died, reading excerpts from the letters they wrote, in some cases letters that were to be opened only in the event that the soldier didn't make it home.

"My death will mean nothing if you stop now," Louisiana National Guard Sgt. Michael Evans wrote in a letter home. Evans died Jan. 28 while on patrol in western Baghdad, part of a major security operation to protect the first free Iraqi elections in more than 50 years.

"I know it'll be hard, but I gave my life so you could live, not just live, but live free," Evans wrote.

Mr. Bush's nine-minute address was punctuated eight times by applause from a crowd of military families, some of whom were accompanied by soldiers in wheelchairs recovering from their wounds.

As he has done since U.S. forces invaded Iraq in March 2003, the president said the war is part of a greater conflict necessitated by the Sept. 11 terrorist attacks that claimed nearly 3,000 lives, toppled the World Trade Center and heavily damaged the Pentagon, which is near the cemetery where Bush spoke.

"Two terrorist regimes are gone forever, freedom is on the march and America is more secure," Mr. Bush said of the end of the Taliban regime in Afghanistan and Saddam Hussein's rule in Iraq.

But it was excerpts from the letters that Bush read to the audience that drew tears from some, along with the strongest applause.

"Realize that I died doing something that I truly love for a purpose greater than myself," Marine Capt. Ryan Beaupre of St. Anne, Ill., wrote to his family. Beaupre was killed when the helicopter he was helping to pilot crashed in Kuwait in the early hours of the war.

Elsewhere in the United States: