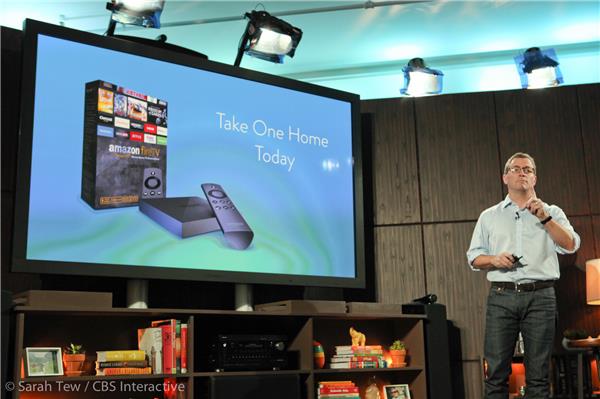 Amazon is jumping into an already crowded market with a new video-streaming device. The retail giant announced Amazon Fire TV on Wednesday at a press event in New York City.

Peter Larsen, vice president of Amazon's Kindle division, kicked off the event saying that Amazon's digital video customers have grown by 350 percent since 2011.

Fire TV is about the size of Apple TV and comes with a remote control, which has a microphone for voice search. Fire TV users can search for videos or games at any time while using the device. The streaming device has a quad core processor, dedicated graphics-processing unit (GPU) and 2 gigabytes of RAM.

Larsen says that Fire TV has three times the performance of Apple TV, Roku 3 and Chromecast.

"This is not a closed ecosystem," Larsen said.

Fire TV offers content from Amazon Prime, as well as Netflix, Hulu, ESPN and Showtime. The company said it was working to offer content from HBO Go but it wasn't available for Fire TV's launch.

The device also has music apps, like Pandora and TuneIn Radio.

Amazon has a synchronized timeline of actors and actresses that appear on Fire TV. The device is designed to integrate with the Kindle Fire HD in a second-screen experience that features X-ray, which is synced with data from IMDB.com.

Fire TV has parental controls, as well. FreeTime Unlimited is an ecosystem for kids that offers content from Sesame Street, PBS Kids and Nickelodeon.

Amazon faces hardware competition with Apple TV and Roku 3, which retail for about $100, and Google's Chromecast which is $35.

But it has a content delivery network (CDN) that rivals Apple's.

"Amazon has a robust CDN, an existing advertising network, and a successful online retail property. So, it is in a position to monetize that box in ways that no other consumer electronic maker or online video service can currently match," Brett Sappington, director of research at Parks Associates, told CBS News in an email.

"At the same time, having these benefits is no guarantee of success. Google also has an ad network, CDN, and successful video business (YouTube), yet was unable to find success with its GoogleTV offering," Sappington added.

Amazon also unveiled Fire game controller, which will retail for $39.99 and come with 1,000 Amazon coins. Fire TV will come with the popular video game "Minecraft." Games on Fire TV will cost and average of $1.85, and Amazon says it will also be developing games with Amazon Game Studios.

Amazon's new device will retail for $99 and is available now.