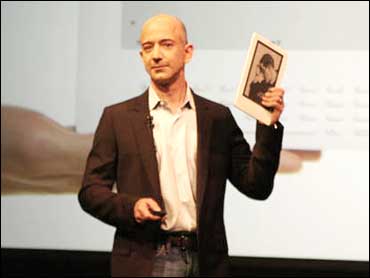 This story was written by CNET's Caroline McCarthy.

Amazon CEO Jeff Bezos was coy about exactly why he isn't thrilled with Google's attempt to forge its way into the digital publishing business.

"We have strong opinions about that issue which I'm not going to share," Bezos said to interviewer Steven Levy at the Wired Business Conference. "But, clearly, that settlement in our opinion needs to be revisited and it is being revisited."

In a court battle rife with twists, turns, and delays, Google has been attempting to push forward its Book Search initiative, which could potentially give the Mountain View, Calif., tech giant exclusive access to digital editions of some out-of-print books. That could, as Levy pointed out, get in the way of Amazon's goal of offering every book ever printed in every language on the Kindle and its new, bigger Kindle DX sibling. And it sounds like that's where Amazon has some beef.

"There are many forces of work looking at that and saying it doesn't seem right that you should do something, kind of get a prize for violating a large series of copyrights," Bezos said.

Bezos was speaking at the conference, which had the subtitle "Disruptive by Design," to talk about Amazon's legacy of shaking up the retail industry and now potentially the publishing industry with its Kindle e-reader device. Most of his talk was focused on the sort of business advice that one might expect a tech company to provide to a room full of big-business and old-media types ("be stubborn on the big things and very flexible on the details," "you have to be willing to be misunderstood for long periods of time"), but he did get a few minutes to talk about how he thinks the Kindle is changing things.

In New York, a longtime global hub of the beleaguered publishing, media, and advertising industries, what he had to say was particularly weighted. The Kindle, after all, is doing extremely well: Bezos said that out of the entire offering of 300,000 books available for both the Kindle and physical retail on Amazon, that the Kindle's sales are 35 percent of physical books' after only 18 months on the market.

"Internally, we are startled and astonished by that statistic," Bezos said.

But he wouldn't promise that the device will singlehandedly save the newspaper industry.

"I never want to convey that I think we have a sinecure with any particular product offering, but if we execute well and other companies that do these kinds of electronic readers, that is going to be part of what happens with newspapers," Bezos said. "And I do think there are going to be multiple companies competing with reading devices and I think there's room for multiple winners."

Like much of the speakers at the Wired Business Conference, Bezos talked extensively about how things have changed over the past few years, and how it demands a deep rethinking of business practices in all industries. In this case, he was talking about the media business.

"Unfortunately, there's a collision of several major issues happening to the magazine, newspaper, and publishing industries all at once, including most recently the recession which has taken a bad situation and made it much worse," he said. "But the biggest structural problem in my opinion is there's just so much supply of advertising space. That's a fundamental problem that's not going to go away."

But at the same time--in keeping with the conference's theme--there's an extraordinary amount of opportunity, Bezos insisted.