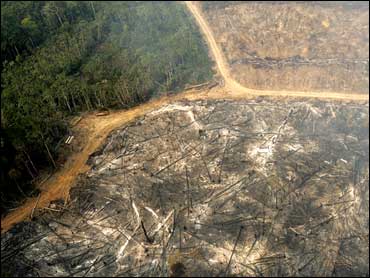 The rate of Amazon deforestation rose sharply during the final five months of 2007 as land was cleared for soy and cattle, prompting a top-level emergency meeting Thursday by government officials to deal with the problem.

Environment Minister Marina Silva and other ministers were heading to the presidential palace Thursday to meet with President Luiz Inacio Lula da Silva about the report on deforestation issued late Wednesday.

Silva's ministry estimates as much as 2,700 square miles of rain forest was cleared from August through December, meaning that Brazil could lose 5,790 square miles of jungle by August of this year if the rate continues.

That would be a sharp increase from the 4,334 square miles that was cut down and burned from August 2006 through July of last year.

Although preliminary calculations can only prove that 1,287 square miles of rain forest were cleared from August through December, ministry executive secretary Joao Paulo Capobianco said officials are analyzing satellite imagery and working under the assumption that the higher count of jungle was cleared.

"We're working with the worst hypothesis," he said, according to Brazil's official Agencia Brasil news service.

The Environment Ministry could not immediately provide data to precisely compare the five-month destruction rate for last year to the same period in 2006.

Most of last year's destruction happened in November and December and was concentrated in the three Amazon region states of Mato Grosso, Para and Rondonia.

Mato Grosso is the center of Brazil's important soy production industry, and Latin America's largest nation is second only to the United States for production.

Jungle is typically cleared in the Amazon to provide pasture for cattle, then soy farmers move in later and cultivate their crops. Brazil also has a booming beef export industry, and cattle ranchers have been expanding operations in the Amazon.

Brazil last year trumpeted a drop in Amazon deforestation, but the new numbers appear to indicate that the situation has been reversed. Brazilian media reported that the president and the ministers would discuss emergency measures to reduce the deforestation.

Your iPhone or Mac could be hacked with an iMessage