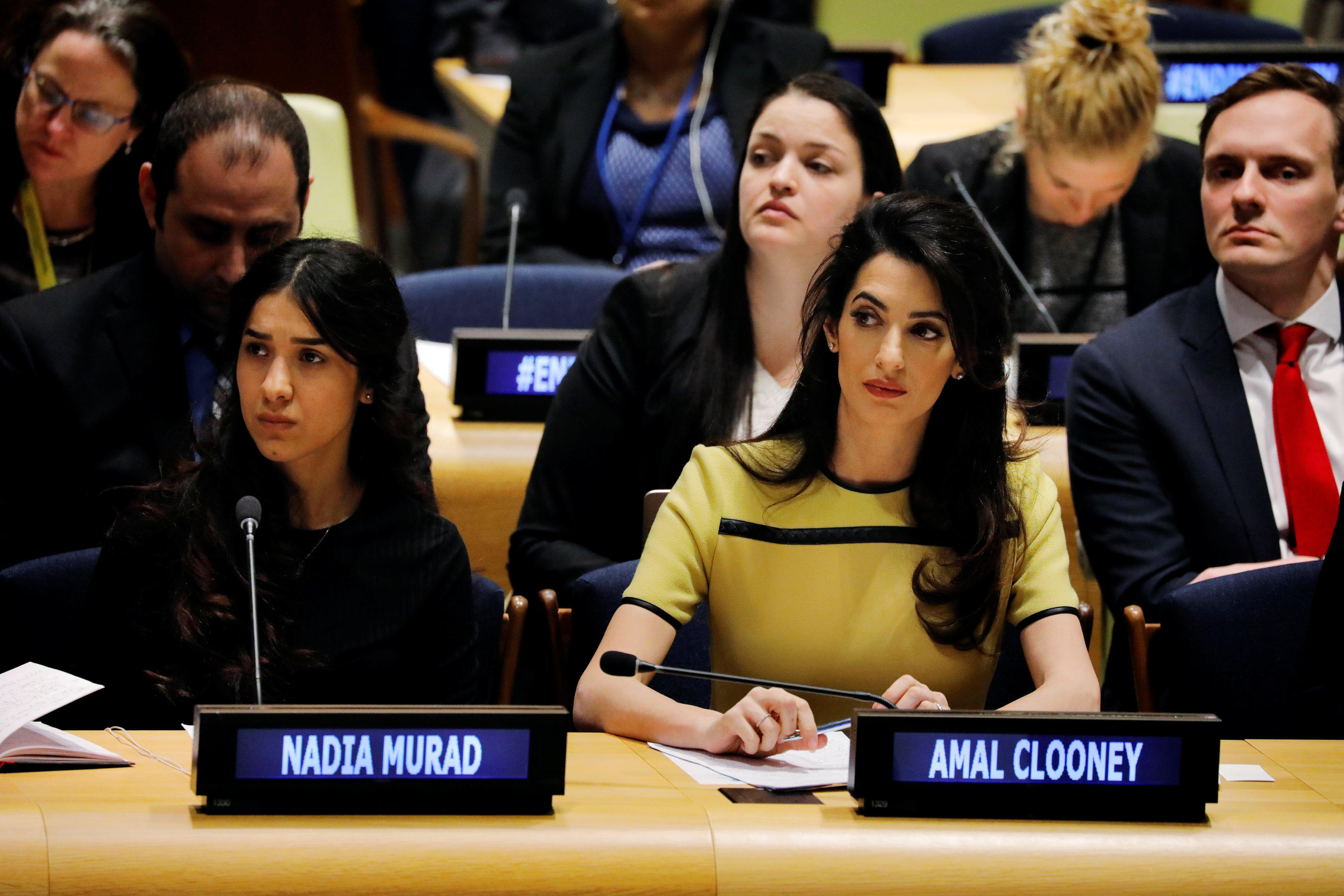 UNITED NATIONS --- Human rights lawyer Amal Clooney urged Iraq and the world’s nations on Thursday not to let the Islamic State of Iraq and Syria (ISIS) “get away with genocide.”

The wife of actor George Clooney, who represents victims of ISIS rapes and kidnappings, told a U.N. meeting that what’s “shocking” is not just the group’s brutality but the “passive” response by the world’s nations to the campaign to investigate its crimes and bring the perpetrators to justice.

She urged Iraqi Prime Minister Haider al-Abadi to send a letter to the U.N. Security Council so it can vote to set up an investigation into crimes by the group in Iraq where ISIS once controlled about 40 percent of the country’s territory but is now being routed by government and coalition forces.

“Justice is what the victims want...” Clooney said, “but justice will be forever out of reach if we allow the evidence to disappear, if mass graves are not protected, if medical evidence is lost, if witnesses can no longer be traced.”

Clooney expressed frustration that nothing has happened since she came to the U.N. six months ago seeking accountability for victims of the ISIS, also known by the Arab name Daesh.

“Killing ISIS on the battlefield is not enough. We must kill the idea behind ISIS by exposing the brutality and bringing individual criminals to justice,” she said.

Clooney represents Nadia Murad, a Yazidi woman captured by ISIS in Iraq in 2014, who has spoken out about since her release about being raped, sold as a sex slave, and praying for death while in captivity.

Murad, now a goodwill ambassador for the U.N. Office on Drugs and Crime for the Dignity of Survivors of Human Trafficking, told the meeting that victims have patiently waited for over a year for the investigation of ISIS to start “to be able to at least bury our dead.”

“Why it is taking so long? I cannot understand why you are letting ISIS get away with it, or what more you need to hear before you will act,” Murad said, her voice breaking with emotion. “So today, I ask the Iraqi government and the U.N. to establish an investigation and give all the victims of ISIS the justice they deserve.”

The Yazidis, a religious minority, have been in the crosshairs of ISIS in Iraq for several years, reports CBS News’ Pamela Falk who spoke with Clooney and Murad just before the meeting at the U.N., and a U.N. Commission of war crimes experts called the actions against them a genocide.

U.N. action to refer the case of the Yazidis to the International Criminal Court has been delayed by a dual veto by Russia and China, Falk added, and, as a religious minority in Iraq and Syria, their applications for asylum have been in limbo since the announcement of both the first and second Trump Administration travel bans.

Clooney addressed prime minister al-Abadi saying it was initially Iraq’s idea to involve the U.N. and sending a letter “would silence those who doubt your commitment to bring Daesh to justice.”

If no letter is forthcoming, she said the Security Council could act without Iraq’s consent, or it could refer the extremist group to the International Criminal Court, or the General Assembly could establish “an accountability mechanism” as it did for crimes in Syria in December. U.N. Secretary-General Antonio Guterres could also launch an investigation, she said.

“But none of this has happened,” Clooney said. “Instead, mass graves in Iraq lie unprotected and un-exhumed, witnesses are fleeing and not one ISIS militant has faced trial for international crimes anywhere in the world.”

Clooney urged all countries “to stand up for justice” and demonstrate “moral leadership” to make sure that ISIS is held accountable.

Britain’s U.N. Ambassador, Matthew Rycroft, told the meeting he looks forward to finalizing the Security Council resolution with Iraq “very, very soon.” He said the aim is to assist Iraq “with the difficult but crucial challenge of preserving the huge amount of evidence of Daesh crimes committed on Iraqi territory.”

Iraq’s U.N. Ambassador, Mohamed Alhakim, said the government plans to try cases involving low and mid-level members of Daesh but it will have to work with the international community to bring the top leaders to justice.

He made no mention, however, of U.N. help in preserving evidence or the required letter.