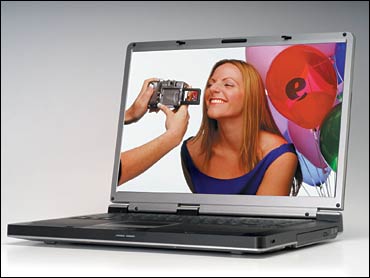 A year ago, we sent our daughter Katherine off to Whitman College with a notebook computer and she's thanked us on both accounts. She loves Whitman and she also likes her notebook. The notebook part was a tough decision. In addition to being more expensive than desktop machines, notebooks are more likely to be lost, stolen or — for that matter — dropped. The plus side is that she's able to carry it to the library, to home during breaks and even on bus trips to her cross-country running competitions.

Her notebook PC managed to survive the school year so it, along with Katherine, are about to head back to Walla Walla, Wash., for another term. But if I were to buy her a machine right now, I'd opt for the new $1,199 eMachines M5310 notebook computer.

That's right — eMachines — the company that built its reputation with cheap off-the-shelf desktop PCs. And, until the company underwent a management change a couple of years ago, it was a pretty bad reputation at that. Things have improved since Wayne Inouye took over as CEO in 2001. The company has vastly improved its once terrible technical support department and started coming up with more innovative machines, including this notebook PC.

With a weight of 6½ pounds and dimensions of 1.36" x 14.0" x 10.0," it may be a bit too large and heavy for frequent travelers like me, but for a college student and most other users it's everything you can ask for in a mobile computer at an extremely attractive price.

Let's start with the basics. It doesn't have "Intel inside," but it does have a more-than-fast-enough Athlon XP mobile processor that gets the job done. It also comes with a generous 512 megabytes of memory, more than enough for the vast majority of PC users. The 40-gigabyte hard drive should also be fine, except for college students who download a lot of movies, which they aren't supposed to do anyway.

Speaking of movies, Katherine can borrow free DVDs from the Whitman Library, which would work out well if she had this notebook because it has a DVD/CD-RW drive along with a 15.4-inch-wide screen that's perfect for watching movies. This is one of the few notebooks with a screen this wide, which has nearly the same aspect ratio as a high definition TV or, for that matter, a movie theater screen. My wife and I brought it along on a brief trip and very much enjoyed watching movies on the screen.

The DVD drive can also be used to both read and write CDs. Katherine would no doubt be tempted to use that feature to copy her friends' audio CDs but, of course, she wouldn't dream of violating the copyright law. Instead, she'll use it on a regular basis to backup her important data files. Or at least that's what I hope she does.

Another great feature is its built-in wireless network. Instead of the usual 802.11b "WiFi" standard that operates at a maximum of 11 megabits per second, eMachines is one of the first companies (Apple was the first) to build in an 802.11g that, in theory, can transmit and receive information at a whopping 54 megabits per second. The reason I say "in theory" is because to take advantage of this speed you need to be connected to an 802.11g network and those are still pretty rare. Even if you were on such a network, chances are that the Internet connection would still be at 2 megabits or less, so you'd never even notice the extra speed. Still, no harm in having it because 802.11g is backward compatible with the ubiquitous 802.11b systems, which means she could still use this notebook wirelessly at Whitman's library, student center and other buildings that are "wired" for wireless (WiFi) computing. She could also use it at Starbucks or our home network.

The new notebook has three high-speed USB 2.0 ports and a "FireWire" (IEEE 1394) port. Together USB 2.0 and FireWire make it possible to connect to high speed peripheral devices including external hard drives, scanners and digital video cameras. There's also a VGA port for an external monitor and an S-Video out port for a TV set along with a microphone and audio out jack.

Before you buy any notebook, play with both the keyboard and the pointing device. This has a full-size keyboard that most people will be happy with. The space bar is a bit shorter than some, but even fast typists like me will almost never have a problem hitting it with their thumb. The pointing device is a touchpad with a vertical scroll bar. Touch pads are those heat sensitive things that you manipulate with your fingers or thumbs. Personally, I prefer the "pointing sticks" that are used on some Toshiba and all IBM models (IBM now offers both a touchpad and a pointing stick), but I know lots of people who swear by touchpads. It's all a matter of personal preference. Of course, you can always plug in an external mouse.

Frankly, I can't say enough good things about this machine. It's a terrific value and a solid performer. I wouldn't buy one for my own use simply because I travel a lot and prefer a lighter machine. For a college student or anyone who doesn't plan to carry the machine around all day, it's probably the best deal on the market.

Next week I'll tell you about the dream machine that's almost perfect for frequent fliers like me. Hint: it's from Japan, it's not from Sony and it costs twice as much as a similarly equipped eMachines notebook.