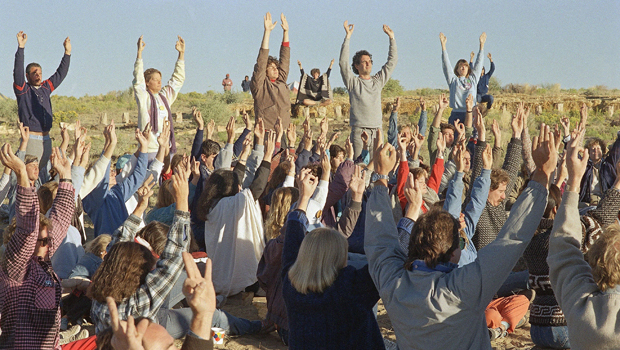 And now a page from our "Sunday Morning" Almanac: August 16th, 1987, 28 years ago today ... a day for worldwide meditation, music and dance.

For that was the day of the so-called "Harmonic Convergence."

The brainchild of art historian José Argüelles, the Convergence was based on the ancient Mayan calendar, and on a relatively rare alignment of the planets.

"If we play our cards and our flutes and our wind chimes right, we could be in for a New Age of peace and love," reported CBS News correspondent David Browning. As he set the stage for the Convergence a few days before, he found enthusiastic volunteers for the ceremonies to come:

"We have to to do something," said one woman. "We have a responsibility to change the consciousness on the planet."

"One day I had a calling, an inner guidance, saying that I had to go to Mount Shasta," another woman told Browning.

Not that everyone around Mount Shasta was eager for the Convergers to converge:

"I don't want them up here," said one resident. "I mean, they go up on the mountain, no telling what they're gonna do up there."

As for Convergence creator José Argüelles, his expectations were literally out of this world:

"There may be UFO sightings, or there may not be, but there will definitely be some type of communication of an extraterrestrial nature," he said.

As it happened, there were no confirmed UFO sightings that day (that we know of anyway). Still, many thousands of celebrants WERE were spotted at Convergence venues around the nation and the world, ranging from Stonehenge ... to the Pyramids of Egypt ... to New York City's Central Park.

A worldwide convergence of people of good will ... and good cheer.

Studying the effects of long COVID

The history of Sub-Zero: the Rolls Royce of refrigerators
Thanks for reading CBS NEWS.
Create your free account or log in
for more features.
View CBS News In
CBS News App Open
Chrome Safari Continue
Be the first to know
Get browser notifications for breaking news, live events, and exclusive reporting.