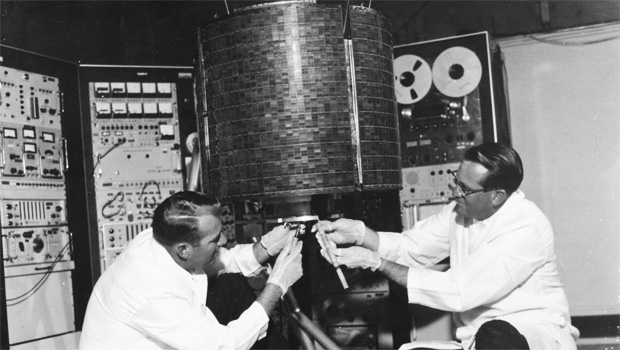 And now a page from our "Sunday Morning" Almanac: April 6th, 1965, 49 years ago today . . . the day technology conquered the Atlantic.

For that was the day the United States launched "Early Bird" -- the first geosynchronous communications satellite, a satellite fixed over the same spot on Earth between America and Europe.

A month after launch, Early Bird (a.k.a. Intelsat 1) showed what it could do in a special broadcast -- relaying an image from North America to Europe.

What followed was a smorgasbord of sights and sounds (marred by the occasional technical glitch), a hint of the communications revolution to come:

By June of 1967, additional satellites made possible the first world-wide live broadcast. Fourteen countries jointly produced "Our World," seen by at least 400 million people in more than two dozen countries.

Like the earlier trans-Atlantic broadcast, "Our World" presented an eclectic mix of events, ending with a live recording session in London by the world's biggest rock band: The Beatles singing "All You Need Is Love."

Today a huge flock of satellites relays our weather, GPS and television signals, along with TV, and though we take them for granted, they occasionally make news.

It was a geostationary satellite over the Indian Ocean that tracked the final signals from Malaysia Airlines Flight 370.

And Ukraine has announced plans to launch its first geostationary satellite this year.

As for that first Early Bird satellite . . . though it was shut off long ago, it's still up there.