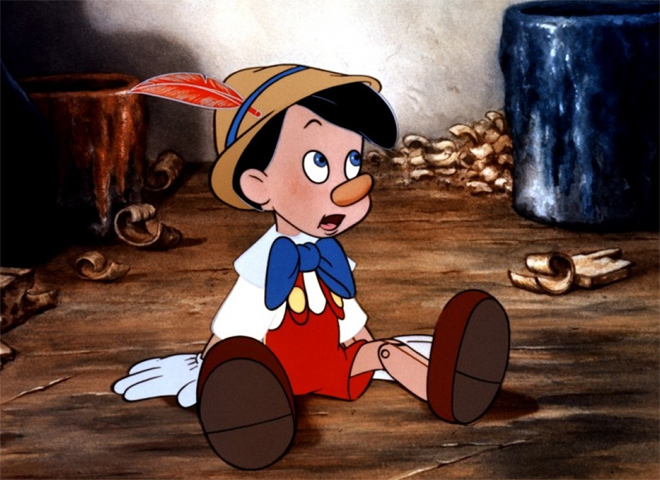 And now a page from our "Sunday Morning" Almanac: February 23rd, 1940, 74 years ago today  . . . the day moviegoers viewed an animation landmark, no strings attached.

For that was the day Walt Disney's "Pinocchio" opened nationwide.

The film was based on a book by 19th century Italian author Carlo Collodi, which told the story of a wooden marionette who dreamed of becoming a real, live boy.

Though originally depicted as something of a brat (and rather ugly to boot), the Disney studios smoothed down his rough edges, and those of the cricket character as well, as animator Ward Kimble recalled years later:

"I ended up with a grasshopper, and Walt said, 'We can't use that. That's not cute enough.' So I started making him smaller."

Transformed for the film, the dapper Jiminy Cricket served as Pinocchio's conscience, and (as voiced by popular singer Cliff Edwards, a.k.a. "Ukelele Ike") sang, "When You Wish Upon a Star," which went on to win an Academy Award.

After a series of bizarre adventures, and lies that made his nose grow longer, Pinocchio finally does become a real boy.

The film, however, had a hard time at first.

With World War II closing off foreign markets, "Pinocchio" was a box office disappointment for years, until theatrical re-releases and DVD sales put it well into the black.

Today, thanks to recognition by both the American Film Institute and the National Film Registry, "Pinocchio" is widely regarded as one of the greatest films ever made.

And that's no lie.