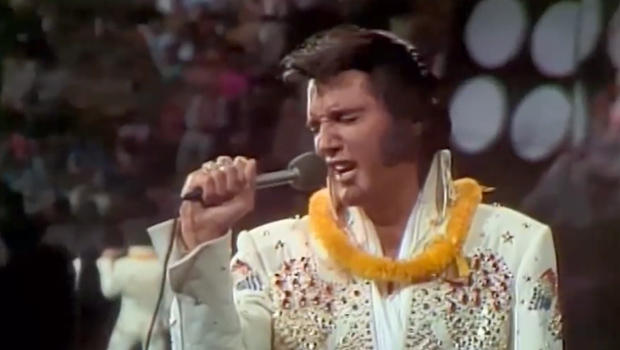 And now a page from our "Sunday Morning" Almanac: January 14th, 1973, 45 years ago today -- the night that saw the broadcast of "Elvis: Aloha from Hawaii via Satellite," a cancer benefit concert billed as the world's first live satellite concert by a solo artist.

Performed just after midnight in Honolulu, the show was broadcast live to Asia during their prime time ... and by tape delay to the rest of the world.

In his glittering white jumpsuit, bedecked with leis, Elvis delivered his biggest hits, from "Hound Dog" to "Blue Suede Shoes," and more.

He closed with a slightly shaky version of "Can't Help Falling In Love."

To watch Presley perform "Steamroller Blues" from "Elvis: Aloha from Hawaii via Satellite" click on the video player below:

The concert was a huge ratings success, although claims of more than a billion viewers seem unlikely.

Whatever the number, few that night could ever have imagined that in just four-and-a-half years, Elvis Presley would be dead at age 42.

A statue of The King has stood for years outside that Honolulu concert hall. And in THAT sense, at least, Elvis has still only JUST left the building.

2023 Grammys: How to watch Beyoncé vs. Adele, Bad Bunny and more
More
Thanks for reading CBS NEWS.
Create your free account or log in
for more features.
View CBS News In
CBS News App Open
Chrome Safari Continue
Be the first to know
Get browser notifications for breaking news, live events, and exclusive reporting.