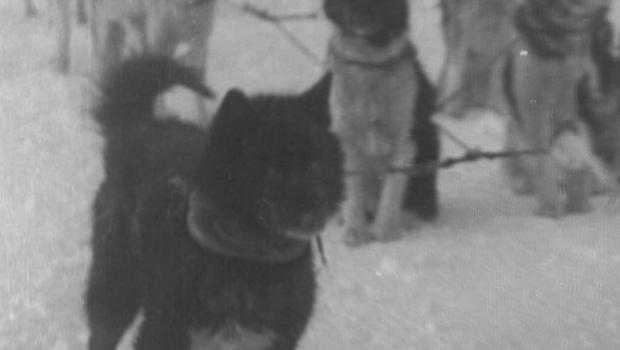 February 2, 1925 was a day of life-saving (and, dare we say, dogged) determination, for that was the day a dog sled team with Balto in the lead entered Nome, Alaska with an emergency supply of diphtheria serum.

Child after child in the small and isolated town had fallen ill with the potentially deadly disease. With ice blocking the harbor, and winter weather grounding planes, a more than 600-mile-long dog sled relay was the only hope.

On January 27, the first team of dogs set off, while the rest of the nation held its breath. For six long days, a series of dog teams battled blinding blizzards and bitter sub-zero cold to get the serum through.

Though more than 150 dogs in all took part in the record-breaking run, it was Balto who led the final 53-mile stretch, and wound up getting most of the glory.

He went on to tour the country, a bona fide celebrity.

After Balto's death in 1933, his remains were preserved and put on display at the Cleveland Museum of Natural History.

And hundreds of miles to the East, a statue of Balto continues to welcome visitors to New York's Central Park, snow or shine.

Watergate at 50: The political scandal that changed Washington

A Passover prayer: We must use our freedom to liberate the oppressed