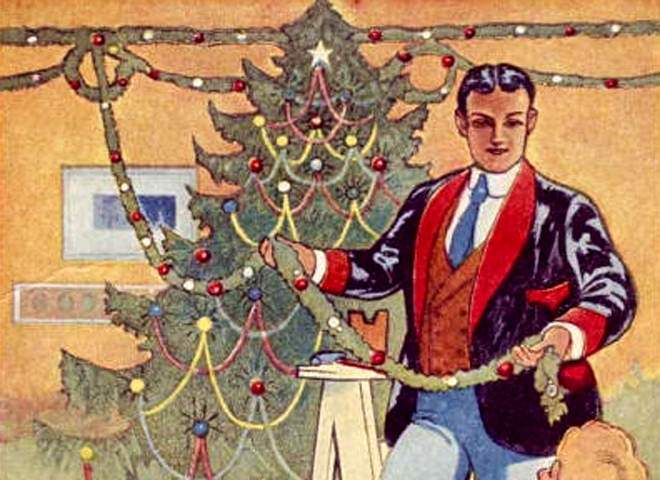 For it was in his home that evening that a Thomas Edison colleague named Edward Johnson turned on the world's first electric Christmas tree lights, captured in a photograph taken three days later (left).

Until then, people had been lighting their trees with REAL candles . . . a practice whose hazards one would think should have been obvious.

Indeed, safety was a selling point for the new lights from the beginning, but for years their relatively high cost limited their use to the well-off.

In 1923, President Calvin Coolidge helped raise their profile when he lit the first National Christmas Tree decorated with 2,500 electric lights.

Over the years, Christmas lights have became ever cheaper and more abundant . . . and no longer limited to just a single tree inside the home, as a drive down many a residential street will show.

Not that setting up elaborate Christmas lights is an easy task -- the challenges were spoofed in the 1989 film "National Lampoon's Christmas Vacation," starring Chevy Chase.

Marty Slack, of Murray, Utah, made no apologies when our Bill Geist dropped by his house seven Christmases ago. "I think I'm beyond fanatic," Slack said. "I was a fanatic a few years ago."

His display boasted more than 10,000 feet of extension cords, and had people waiting in traffic jams of up to 45 minutes to get a glimpse of his handiwork.

"Hopefully it's creating some memories," he said. "They'll think about this years from now -- how fun it was to go see that house with all those lights."

The Christmas gift from Edward Johnson that keeps on giving.

Diving into the debate over trans athletes
Thanks for reading CBS NEWS.
Create your free account or log in
for more features.
View CBS News In
CBS News App Open
Chrome Safari Continue
Be the first to know
Get browser notifications for breaking news, live events, and exclusive reporting.