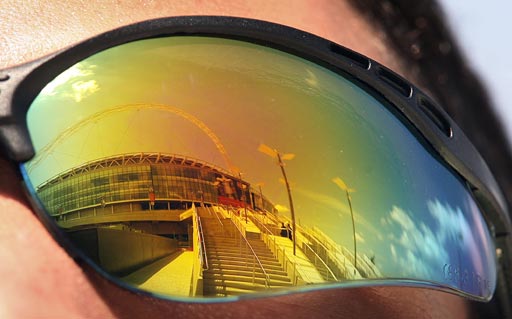 It may be possible someday to gorge yourself with rich food and still lose weight — if a technique performed on laboratory mice also works for humans.

Scientists at Baylor College of Medicine in Houston found that if an enzyme called acetyl-CoA carboxylase 2, or ACC2, is blocked in mice, the animals can eat much more food than other mice and still weigh 10 to 15 percent less.

"If it works in humans like it did in the mouse, I would like it for myself," said Salih J. Wakil, the chairman of biochemistry and molecular biology at Baylor. He is senior author of a study appearing Friday in the journal Science.

"This would be great for the couch potatoes — guys who can sit on the couch, eat the potato (chips), watch the TV, without worrying about having a bigger paunch," adds Wakil. "In the western world, this is a very important thing because of the number of obese people. Obesity is climbing, and is becoming very, very serious."

At least 70 million Americans are obese, including more than a third of adults and one in five children, experts said. Obesity causes 300,000 premature deaths in the United States a year. Experts blame a lifestyle that includes too many fatty and sugary foods and too little exercise.

Obesity increases the risk of illness and death due to diabetes, stroke, coronary artery disease, and kidney and gallbladder disorders. Diabetes, the seventh-leading cause of death among Americans, rose 33 percent from 1990 and 1998.

The Centers for Disease Control estimates that 61 percent of Americans are overweight and 26 percent are obese, or grossly overweight.

Baylor researchers identified a gene that makes ACC2 and then bred mice that lacked both copies of the gene. Such animals are called "knockout mice" because a gene has been knocked out or muted.

Wakil said the knockout mice were permitted to eat as much food as they wanted, for as long as they wanted. A control group of mice with normal genes were fed the same way.

Even though they ate about 40 percent more than the control mice did, the knockout mice lost weight, Wakil said.

"The mice are very healthy and seem just as active as the control mice," Wakil said. "Productivity in terms of having little mice is very good."

The Baylor researchers are now testing compounds that could be used in a pill to block the expression, or secretion, of ACC2. Such a pill will first be tested in mice and then in higher animals, such as monkeys, said Wakil. He said that if all goes well, the pill could be tested in humans within five years.

Laboratories all over the United States are searching for magic drugs that would help control an epidemic of obesity.

Other researchers have identified genes that influence appetite and proteins that restrict fat storage.

They said the research shows that malynyl CoA, an enzyme that is activated by ACC2, "is a crucial regulator of fat metabolism and energy balance."

"Whatever the mechanism," Ruderman and Flier wrote, "inhibition of ACC2 may be a plausible target for the design of new anti-obesity therapeutics."

Wakil said an analysis of the knockout mice showed that inhibiting ACC2 caused cells, particularly those in the muscles and heart, to burn fat rapidly.

"The amount of fat stored is about half of the that in the wild type (control mouse), even though the knockout mouse ate 20 to 40 percent more fat," said Wakil. "Most of the fat is being burned and less is being stored."

In normal circumstances, the body will burn some fat for energy, but will store a surplus for use later when there may be a shortage of food. That mechanism works well when food supplies are uncertain, but when food is plentiful, such as in modern America, it can result in obesity.

Wakil said the lack of fat stored also sends an appetite signal to the brain, commanding the animal to eat more. He said this may explain why the knockout mice tended to eat up to 40 percent more than the control mice.

Wakil said that a patent associated with the ACC2 gene has been applied for and that he would benefit financially if the patent is used to develop an anti-obesity drug. The research was supported, in part, by Abbott Laboratories, a drug manufacturing firm. Other support came from the National Institutes of Health and the Clayton Foundation for Research.