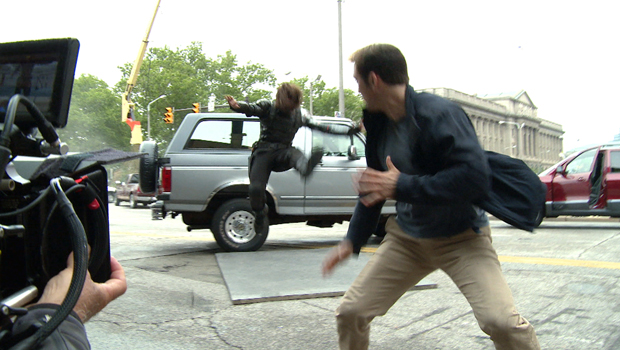 The famous chariot race from the 1959 movie "Ben Hur" is considered a stunt masterpiece. Fast-forward 55 years, and you can find stunt performers taking the fall in this spring's biggest hit. Lee Cowan shows us how they do it:

Being Marvel's star-spangled superhero has never been easy.

Sure, Captain America's got that indestructible shield, but when Cap ends up in a bare-knuckled fight with a mysterious assassin, the Winter Solider, it can make for a pretty rough day on set.

Action movies have action for a reason. It sells tickets -- lots of them.

But studio execs aren't too keen to put their big stars in harm's way -- which is why most of those working on big action movies like this eventually start seeing double.

Sam Hargrave spends his time on the sidelines -- until the action gets a bit too rough for "Captain America"'s Chris Evans. That's when Sam steps in, as Captain America's stunt double.

"I exist because I am expendable," said Hargrave. "In all honesty, it's because if I get hurt, I can be replaced."

Not the job description most of us would sign up for, but then again, being a Hollywood stunt person is no ordinary job.

Stunts have been around as long as there have been cameras and film, giving audiences the thrills that kept them coming back for more.

Film historian Leonard Maltin said, of the 1923 classic "Safety Last," "When you see Harold Lloyd dangling off that clock on a skyscraper, that's really him, and he's really hanging there."

Maltin said stunt work didn't start out as a profession: "The assistant director used to go the front gate in the morning and say, 'You - can you ride a horse?' And if you said yes. 'You want to make 5 bucks?' Sure!"

In the early days of silent films, actors like Buster Keaton thought that stunts were just part of the job.

Keaton, Maltin said, "once broke his neck landing on a railroad track, and didn't know he had done it."

He just got up and did more.

But then came a rodeo cowboy named Yakima Canutt. He was the first to make doing stunt work a specialty. It was his death-defying stunt -- done in John Ford's "Stagecoach," and then again in "Zorro's Fighting Legions" -- that made Canutt a legend.

"At a certain point, he positions himself on the reins between the horses, drops down onto the ground, lets the stagecoach run over him, and then grabs the back of the stagecoach and mounts it again," Maltin said.

"How do you practice that," asked Maltin. "How do you go about developing that idea, and then getting better at it? I can't imagine."

It was so remarkable that Steven Spielberg paid homage to it more than 40 years later in "Raiders of the Lost Ark."

But while they may be adrenaline junkies, don't call stunt people daredevils.

In the swirling seas of danger on any action movie, they see themselves more as risk-calculators than risk-takers.

Tony Angelotti was Johnny Depp's stunt double in the "Pirates of the Caribbean" blockbusters. But he knows all too well how just things can go horribly wrong.

"The sequence was him running out of the cannibal village, pole-vaulting realistically out across the ravine, and landing on the other side," said Angelotti. "He falls into the ravine and he's supposed to unravel like a yo-yo."

But instead of unraveling, Angelotti went into a free-fall: "Completely free fall. And then they hit the brakes on the descender, and I spun like a top so uncontrollably fast that the centrifugal force literally ripped my pelvis apart."

The job of keeping everyone safe usually falls to the stunt coordinator -- and on "Captain America: The Winter Soldier," the job falls to Tommy Harper.

"We have been working on this fight scene literally for four months," he told Cowan.

Today he's rigging a scene called a ratchet. It's a cable attached to a harness that helps a stunt person fly through the air.

"We did one the other day with Sam Hargrave, our Captain America double," said Harper. "We flew him 40 feet into the windshield of a car."

For Hargrave, hitting hard like that is what he gets paid to do.

There's a saying among stunt people, that only the good ones grow old -- and Jeannie Epper is proof of that. Epper was Lynda Carter's stunt double on "Wonder Woman" back in the '70s. She's now in her seventies, and she's STILL hunting for stunt work.

Why? "I don't know," she told Cowan. "I've asked myself that a million times, and I know it's not just for the money. I mean, we do make good money, but I love it. It's where I'm the most alive."

We first met Jeannie back in 1979 on the set of "Wonder Woman," as she prepared to fall through a glass skylight.

Back then, Jeannie stood out as one of the few women in the business.

"You could take just as hard a hit as the guys could?" Cowan asked.

Still, for all the wonder and amazement they provide, stunt people rarely get the red carpet treatment.


There's no Oscar for Best Stunt, but there is the Taurus World Stunt Awards, one place where fancy gowns and band aids go hand in hand.

"The band aid actually is covering up a little cut I got at work on 'Captain America 2,'" said Heidi Moneymaker -- Scarlett Johansson's stunt double -- who took home the award last year for Best Fight in "The Avengers."

To watch a clip of Heidi Moneymaker doubling for Scarlett Johansson in the fight scene from "The Avengers," click on the video player below.


We found Captain America's stunt double there there, too, and guess what? Sam Hargrave won for Hardest Hit -- once again bending a car with his body.

They crash, they burn, they fall, they get back up -- all in a day's work, and yet most of us don't even know their names.

"It takes a lot of time to get art the way you want it," said Hargrave, "and for us, this is art. Action is art."