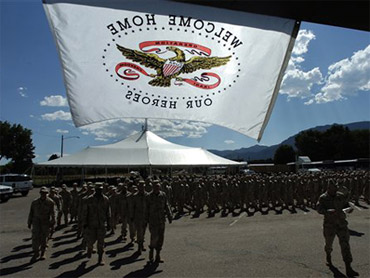 Soldiers from an Army unit that had 10 infantrymen accused of murder, attempted murder or manslaughter after returning to civilian life described a breakdown in discipline during their Iraq deployment in which troops murdered civilians, a newspaper reported Sunday.

Some Fort Carson, Colo.-based soldiers have had trouble adjusting to life back in the United States, saying they refused to seek help, or were belittled or punished for seeking help. Others say they were ignored by their commanders, or coped through drug and alcohol abuse before they allegedly committed crimes, The Gazette of Colorado Springs said.

The Gazette based its report on months of interviews with soldiers and their families, medical and military records, court documents and photographs.

"Toward the end, we were so mad and tired and frustrated," said Daniel Freeman. "You came too close, we lit you up. You didn't stop, we ran your car over with the Bradley," an armored fighting vehicle.

With each roadside bombing, soldiers would fire in all directions "and just light the whole area up," said Anthony Marquez, a friend of Freeman in the 1st Battalion, 9th Infantry Regiment. "If anyone was around, that was their fault. We smoked 'em."

Taxi drivers got shot for no reason, and others were dropped off bridges after interrogations, said Marcus Mifflin, who was eventually discharged with post traumatic stress syndrome.

"You didn't get blamed unless someone could be absolutely sure you did something wrong," he said

Soldiers interviewed by The Gazette cited lengthy deployments, being sent back into battle after surviving war injuries that would have been fatal in previous conflicts, and engaging in some of the bloodiest combat in Iraq. The soldiers describing those experiences were part of the 3,500-soldier unit now called the 4th Infantry Division's 4th Brigade Combat Team.

The unit was deployed for a year to Iraq's Sunni Triangle in September 2004. Sixty-four unit soldiers were killed and more than 400 wounded - about double the average for Army brigades in Iraq, according to Fort Carson. In 2007, the unit served a bloody 15-month mission in Baghdad. It's currently deployed to the Khyber Pass region in Afghanistan.

Marquez was the first in his brigade to kill someone after an Iraq tour. In 2006, he used a stun gun to shock a drug dealer in Widefield, Colo., in a dispute over a marijuana sale, then shot and killed him.

Marquez's mother, Teresa Hernandez, warned Marquez's sergeant at Fort Carson her son was showing signs of violent behavior, abusing alcohol and pain pills and carrying a gun. "I told them he was a walking time bomb," she said.

"If I was just a guy off the street, I might have hesitated to shoot," Marquez told The Gazette in the Bent County Correctional Facility, where he is serving a 30-year prison term. "But after Iraq, it was just natural."

(AP Photo/US Army via The Gazette)
The Army trains soldiers to be that way, said Kenneth Eastridge, at left, an infantry specialist serving 10 years for accessory to murder.

"The Army pounds it into your head until it is instinct: Kill everybody, kill everybody," he said. "And you do. Then they just think you can just come home and turn it off."

He also said: "I had no job training. All I know how to do is kill people."

Both soldiers were wounded, sent back into action and saw friends and officers killed in their first deployment. On numerous occasions, explosions shredded the bodies of civilians, others were slain in sectarian violence - and the unit had to bag the bodies.

Last week, the Army released a study of soldiers at Fort Carson that found that the trauma of fierce combat and soldier refusals or obstacles to seeking mental health care may have helped drive some to violence at home. It said more study is needed.

While most unit soldiers coped post-deployment, a handful went on to kill back home in Colorado.

Many returning soldiers did seek counseling.

"We're used to seeing people who are depressed and want to hurt themselves. We're trained to deal with that," said Davida Hoffman, director of the privately operated First Choice Counseling Center in Colorado Springs. "But these soldiers were depressed and saying, 'I've got this anger, I want to hurt somebody.' We weren't accustomed to that."

At Fort Carson, Eastridge and other soldiers said they lied during an army screening about their deployment that was designed to detect potential behavioral problems.

Soldier John Needham described a number of alleged crimes in a December 2007 letter to the Inspector General's Office of Fort Carson. In the letter, obtained by The Gazette, Needham said that a sergeant shot a boy riding a bicycle down the street for no reason.

Another sergeant shot a man in the head while questioning him, lashed the man's body to his Humvee and drove around the neighborhood. Needham also claimed sergeants removed victims' brains.

The Army has declared soldiers' mental health a top priority.

"When we see a problem, we try to identify it and really learn what we can do about it. That is what we are trying to do here," said Maj. Gen. Mark Graham, Fort Carson's commander. "There is a culture and a stigma that needs to change."

Fort Carson officers are trained to help troops showing stress signs, and the base has doubled its number of behavioral-health counselors. Soldiers seeing an Army doctor for any reason undergo a mental health evaluation.