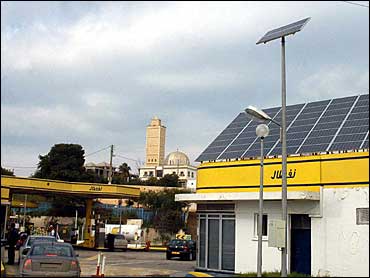 It's a vision that has long enticed energy planners: solar panels stretching out over vast swaths of the Sahara desert, soaking up sun to generate clean, green power.

Now Algeria, aware that its oil and gas riches will one day run dry, is gearing up to tap its sunshine on an industrial scale for itself and even Europe.

Work on its first plant began late last month at Hassi R'mel, 260 miles south of Algiers, the capital. The plant will be a hybrid, using both sun and natural gas to generate 150 megawatts. Of that, 25 megawatts will come from giant parabolic mirrors stretching over nearly 2 million square feet — roughly 45 football fields.

Experts say it's the first project of its kind to combine gas and steam turbines with solar thermal input in a hybrid plant.

The plant should be ready in 2010, and the longer-term goal is to export 6,000 megawatts of solar-generated power to Europe by 2020, about a tenth of current electricity consumption in Germany.

"Our potential in thermal solar power is four times the world's energy consumption so you can have all the ambitions you want with that," said Tewfik Hasni, managing director of New Energy Algeria, or NEAL, a company created by the Algerian government in 2002 to develop renewable energy.

The project is still at an early stage and faces daunting financial and technological obstacles. Solar power's supporters say it will take 10 years for it to become economically competitive, and while undersea cables to Sicily and Spain are planned for construction in 2010-2012, it isn't known who will finance them.

But as the world grows increasingly anxious about climate change and dwindling fossil fuels, ideas that once sounded like science fiction are becoming ever more plausible.

The European Union this year set a mandatory target of producing 20 percent of its energy consumption from renewable sources by 2020, and there are also big political imperatives in play.

In Algeria's case, exporting solar power through undersea cables would add flesh and bone to the idea floated by Nicolas Sarkozy, France's new president, of a "Mediterranean Union" that would bind Europe and North Africa closer together.

The Algerian program is part of a broader reassessment of green technologies by countries that owe their wealth to oil and gas. Algeria, population 33 million, remains heavily dependent on oil and gas exports, which earned it about $54 billion last year.

"Until now, all the oil-producing countries under the lead of Saudi Arabia did everything to torpedo renewable energies," said Wolfgang Palz, chairman of the independent World Council for Renewable Energy, speaking on the sidelines of an international conference on renewable energy in Algiers in June.

"This is really a big change now because with all this talking about the limitations of conventional resources," oil-producing countries "feel obliged to do something," he said.

"The solar potential of Algeria is huge, enormous, because solar radiation is high and there is plenty of land for solar plants," said Eduardo Zarza Moya, who works on solar power for Spain's public energy research center, CIEMAT. "The price of the land is low, it's cheap, and there is also manpower."

Algeria already uses photovoltaic solar panels to electrify 18 scattered, off-grid villages in the Sahara, and 16 more are due to come on line by 2009. Two such projects are run by British-based company BP.

The Hassi R'Mel site represents large-scale power generation. It is the first of four planned hybrid plants which will use Algeria's abundant natural gas to supplement sunshine and ensure power at night or in cloudy weather. The Hassi R'Mel plant, which will produce power for domestic consumption, will also house a research center to study how to reduce solar power costs.

The hybrid plants will use a thermal technology called concentrating solar power, or CSP, in which sunlight heats fluids to drive an electricity-generating turbine.

The system is widely regarded as being cheaper and having better storage potential for large-scale energy production than photovoltaic technology, which converts sunlight directly into electricity. CSP plants have operated in California since the 1980s, but when gas prices fell, new construction stopped.

Spanish engineering firm Abener has a 66 percent share in the $425 million Hassi R'Mel project, having won an international tender to build the plant with Algeria's NEAL.

Algeria hopes to build three other hybrids generating 400 megawatts each by 2015, by which time Algeria aims to be producing 6 percent of its electricity from renewable sources.

Experts warn that financing the cables may wipe out the profits from selling the power in Europe. They also say the domestic market will find it hard to compete with cheap Algerian oil and gas.

But they're positive about the long-term outlook. The gas component in the hybrid plants will produce some greenhouse emissions. "But gas is much cleaner than oil and in time you will increase the share of solar," said Richard Perez, a research professor specializing in solar power at the State University of New York. He spoke to The Associated Press by phone.

Franz Trieb, an analyst at the German Space Agency in Stuttgart who helped produce a recent study on CSP in Mediterranean and Middle East countries, said that by 2020 the cost of collecting solar power would be equivalent to paying $15 for a barrel of oil.

"In 2020, we will have considerable capacity of CSP installed worldwide and this will lead to cost reductions," he said. Delivery systems "would add a little bit to the cost but not too much. It could be competitive with electricity prices in Europe."

But investment in renewable energy rose from $80 billion in 2005 to $100 billion in 2006, and solar companies raised more than any other renewable energy sector on public markets last year, at $5.6 billion — more than triple what they raised in 2005, according to a report released in June by the United Nations Environment Program. The biggest investments were in the United States, Europe, China and India.

Major energy companies say they are not yet ready to invest abroad on a large scale. ExxonMobil spokesman Dave Gardner said the technology breakthroughs would have to be significant to attract ExxonMobil investment.

But he said his company is seeking to foster such breakthroughs by funding a $225 million project at Stanford University on renewables and energy efficiency.

Algerian energy officials acknowledge that the country's success with solar power will depend on demand and technology.

Right now, solar-derived electricity costs 25 percent more than using gas and will need to be subsidized for 10 years until the cost of solar power comes down, said Hasni, the Algerian company director.

"The current race is to see who will control renewable energy technologies, and we are in the race," Algerian Energy Minister Chakib Khelil told reporters. "We have the human and financial resources, and we have the will."