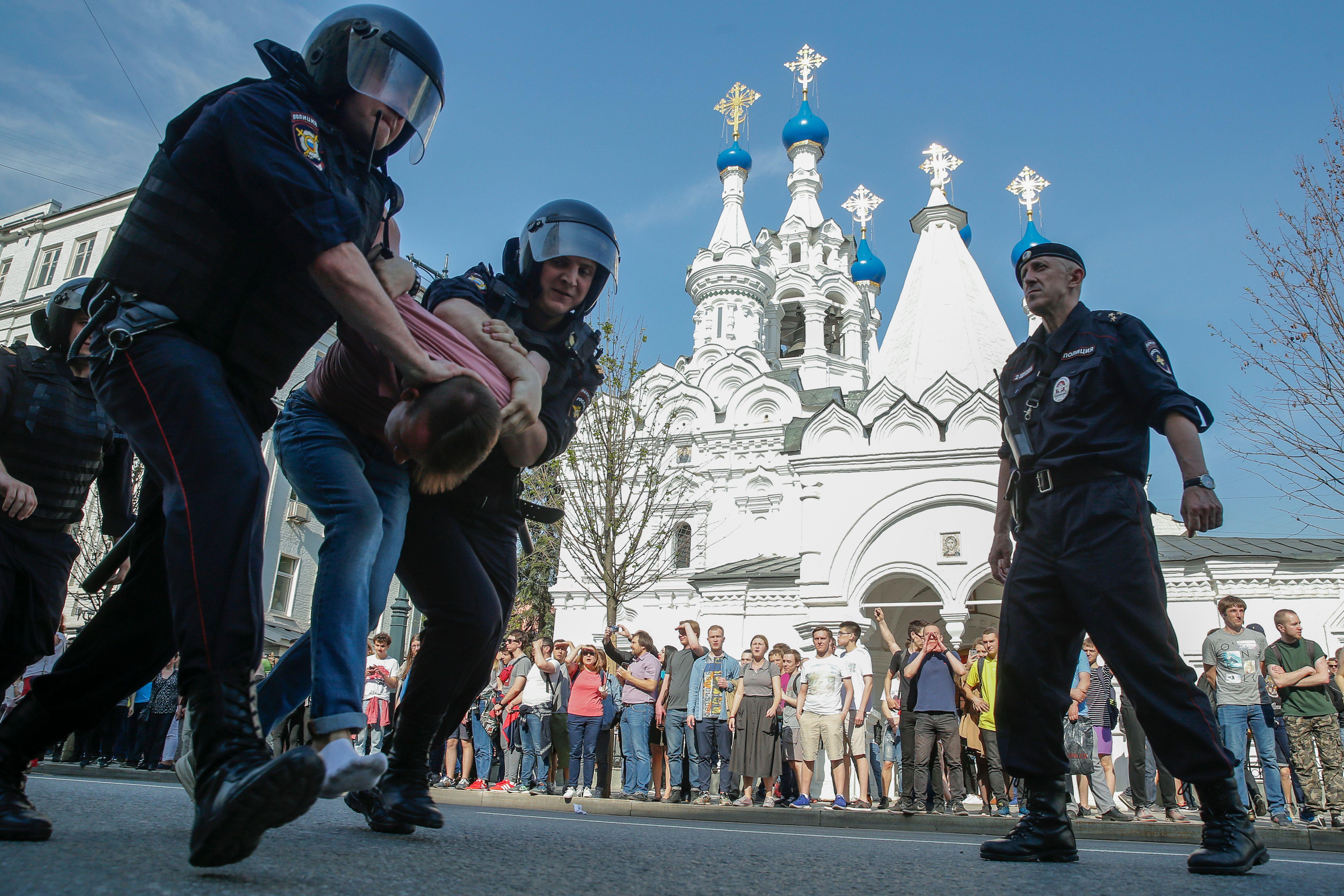 MOSCOW -- Russians angered by the impending inauguration of Vladimir Putin to a new term as president protested Saturday in scores of cities across the country -- and police responded by reportedly arresting nearly 1,600 of them, including protest organizer Alexei Navalny, the anti-corruption campaigner who is Putin's most prominent foe. Police seized Navalny by the arms and legs and carried the thrashing activist from Moscow's Pushkin Square, where thousands were gathered for an unauthorized protest.

Police also used batons against protesters who chanted "Putin is a thief!" and "Russia will be free!"

Demonstrations under the slogan "He is not our czar" took place throughout the country, from Yakutsk in the far northeast to St. Petersburg and Kaliningrad on the fringes of Europe.

"The main purpose is to come out on the streets and show that we are here, that we are present," one protester told CBS News' Elizabeth Palmer.

But Palmer reports that others in the crowd said they wanted more leadership from Navalny, that simply videos of him getting arrested that go viral online. Other opposition leaders are frustrated that Navalny insists on going on it alone.

The OVD-Info group, which monitors political repression in Russia, said late Saturday that 1,599 people had been detained at demonstrations in 26 Russian cities. It said 702 were arrested in Moscow alone, and another 232 in St. Petersburg.

Moscow police said about 300 people were detained in the capital, state news agencies said, and there was no official countrywide tally.

"Let my son go!" Iraida Nikolaeva screamed, running after police in Moscow when they detained her son. "He did not do anything! Are you a human or not? Do you live in Russia or not?"

Navalny was to be charged with disobeying police, an offense that carries a sentence of up to 15 days, news reports said, although when he would face a judge was not immediately clear. Navalny has served several multi-week stretches in jail on similar charges.

In St. Petersburg, police blocked off a stretch of Nevsky Prospekt as a crowd of about 1,000 marched along the renowned avenue. Video showed some demonstrators being detained. Protesters there shouted "Jail the tsar!" the BBC reports. Activists have also been using a Russian hashtag on Twitter that translates as: "He's not our tsar."

Putin is to be inaugurated for a six-year term on Monday after winning re-election in March with 77 percent of the vote. Navalny had hoped to challenge him on the ballot but was blocked because of a felony conviction in a case that supporters regard as falsified in order to marginalize him.

Navalny is not an elected politician, but has led protests against Putin and his allies since the 2011 parliamentary election. Navalny has called nationwide demonstrations several times in the past year, and the turnout has rattled the Kremlin.

Saturday's protests attracted crowds of hundreds in cities that are far remote from Moscow, challenging authorities' contention that Navalny and other opposition figures appeal only to a small, largely urban elite.