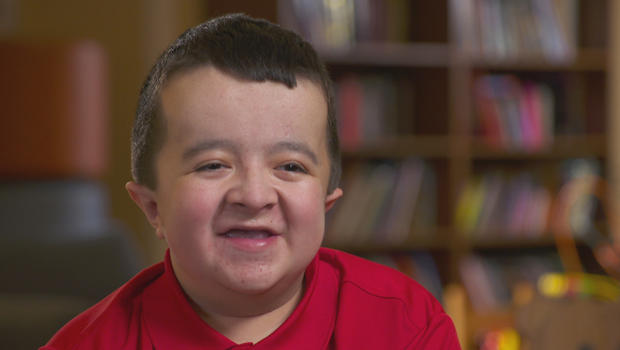 There are few places both as hopeful and as heartbreaking as a children's hospital, especially around the holidays. While there are many, chances are you may know Shriners Hospitals for Children because of one very special patient.

"I used to be known as just that kid in the wheelchair, and now I'm Alec on the commercials, and that's special to me," said 17-year-old Alec Cabacungan of Chicago.

If you've seen him, he's pretty hard to forget; Cabacungan is one of the spokes-kids for Shriners:

"Imagine a kid who was told his disability would be a lifelong struggle; now imagine a place where that same kid is told he can do anything. I don't have to imagine, because that kid is me."

Since he started doing these ads five years ago, donations have skyrocketed.

"Those kids see him as a mentor, and that's who he's kind of become," said producer and director Tracy Trost, who handpicked Cabacungan for a reason: "He's special … He has this life force in him that not a lot of people have. I don't know, I just fell in love with him."

Shriners, known for their tall crimson hats, is a fraternal brotherhood that's been doing charity work for more than 150 years. Cabacungan helps spread their mission. With 22 hospitals all around North America, that means he's on the road about 80 days a year.

It's a demanding job for anyone, let alone someone whose bones are about as fragile as a tea cup. "I've broken over 60 bones in my lifetime," he said. "It'll be with me for my life. I'll live with it until I die."

His parents, Alma and Gill, got the news before he was born.

Correspondent Lee Cowan asked, "What did you guys think when the doctors first told you?"

"It was a very emotional moment for us," Gill said. "We tried for our fourth child, and hopefully it was going to be a son. And when we learned it was a son, and learned that he had a disability, it was quite emotional."

Brittle bone disease is just what it sounds like. Alec's bones are so delicate he could crack a rib even with something as simple as a sneeze. Physical therapy helps, but there is no cure.

He's like any other kid – into video games, and more recently cars. In fact, he's going for his driver's license. There are pedal extensions so he can reach the accelerator and the brake, but that's about it. "My first right turn, I drove into a ditch," he laughed. "Today's going to be better, I promise you!"

He's been doing so well with his lessons that his parents surprised him with his very own car, giving him the feeling of independence any teen gets, but for Alec, infinitely more.

Alma said, "He doesn't want to have any special treatment; he wants to be treated like everyone else, and I think that's probably one of the things he has to fight for the most."

Everything he does he does with gusto, including wheelchair basketball.  "It's the contact, it's the fast pace, it's everything you have in sports except just in a wheelchair," he said. "No limits."

Sports, just about any sport, is his escape. Cabacungan plays so often here, the Shriners even named the court after him.  "This place is very special to me," he said. "I took my first steps on this court. This is home."

He's thought of being a sports broadcaster, in fact, which explains the makeshift TV studio in Alec's bedroom. Years ago, he started his own YouTube channel called Smart Alec on Sports.

Turns out he's an encyclopedia of stats and trivia.  He was so good, TNT even welcomed him on its NBA halftime show:

He makes it all look so easy, but of course, none of it really is.  "There's a lot of tough days where I just, I wanna sometimes just give up and I wanna just stop and … it's hard to live with, but there's a lotta kids who have more challenges in life, and I'm pretty fortunate."

"But doing that every day isn't easy," said Cowan.

Hard is relative in Alec's life – always has been. But behind him every step of the way have been his parents, a fact that during one video shoot with his mother and father overwhelmed him, when his grateful heart seemed like it was about to burst. He said, "You wanted the best care, the best doctors, nurses and staff for your baby son. And I just want to tell you guys, I love you mamma, and I love you dad."

How could anything be more genuine than that?

In this season of giving, we all can receive a little something from Alec Cabacungan – a lesson in what grace really looks like.

"I don't know too much about what will happen to me in the future," he said. "But if something bad does happen, I know that we'll get through it. I know tomorrow is gonna be a better day. And if it's not, then I can make it a better day."