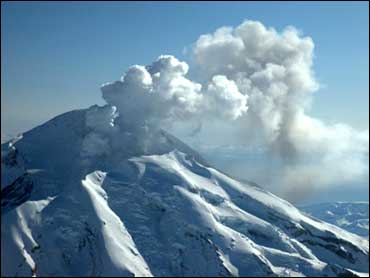 Residents in the state's largest city were spared from falling ash, though fine gray dust was falling Monday morning on small communities north of Anchorage.

"It's coming down," Rita Jackson, 56, said early Monday morning at a 24-hour grocery store in Willow, about 50 miles north of Anchorage. She slid her fingers across the hood of her car, through a dusting of ash.

Ash from Alaska's volcanos is like a rock fragment with jagged edges and has been used as an industrial abrasive. It can injure skin, eyes and breathing passages. The young, the elderly and people with respiratory problems are especially susceptible to ash-related health problems. Ash can also cause damage engines in planes, cars and other vehicles.

Alaska Airlines on Monday canceled 19 flights in and out of the Anchorage international airport because of the ash.

Elmendorf Air Force Base in Anchorage told only essential personnel to report to work. The Air Force says 60 planes, including fighter jets, cargo aircraft and a 747 commercial plane, were being sheltered.

The first eruption, in a sparsely area across Cook Inlet from the Kenai Peninsula, occurred at 10:38 p.m. Sunday and the fifth happened at 4:30 a.m. Monday, according to the Alaska Volcano Observatory.

The wind was taking the ash cloud away from Anchorage, toward Willow and Talkneetna, near Mount McKinley, North America's largest mountain in Denali National Park.

"Just kind of a light dusting," he said. He said the significant amount of ash probably dropped immediately, right down the side of the volcano.

"The heavier stuff drops out very quickly, and then the other stuff filters out. There's going to be a very fine amount of it that's going to be suspended in the atmosphere for quite some time," he said. "The finer ash is going to travel farther, and any ash can affect aviation safety."

Jackson said she was taking a sip of coffee when she tasted something funny on her lips - ash. She was experiencing other affects, too.

"My eyes are itching really bad," she said as she hurried to get out of the store and to her car.

Jackson, who unexpectedly got the day off, hurried home from the grocery store to secure a motorcycle, snowmachine and vehicles under protective blue tarps.

The 10,200-foot Redoubt Volcano, roughly 100 miles southwest of Anchorage, last erupted during a four-month period from 1989-90.

In its last eruption, Redoubt sent ash 150 miles away into the path of a KLM jet and its four engines flamed out. The jet dropped more than 2 miles before the crew was able to restart all engines and land safely. The plane required $80 million in repairs.

Meanwhile, the volcano became restless earlier this year. The observatory had warned in late January that an eruption could occur at any time.

Increased earthquake activity over the past 48 hours prompted scientists to raise the alert level for Mount Redoubt on Sunday.

On Sunday morning, 40 to 50 earthquakes were being recorded every hour.

A steam plume rising about 1,000 feet above the mountain peak was observed Saturday.

On "Intelligence Matters DECLASSIFIED" this week, Mike Morell talks with Bradley Garrett about one of the highest-profile homicide cases he worked on at the FBI.