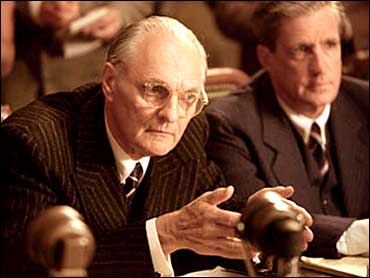 Alan Alda has an incredibly acclaimed career in stage, televison, and film career that has spanned 50 years, but he is known mostly for his likeable, "good-guy" roles.

"When they asked me to do the part," Alda tells The Early Show co-anchor Hannah Storm, "I thought, boy, what a compliment that I'm going to work with Scorsese and Leo and play this terrific part and this great script. And they showed me this picture of this guy: one of the ugliest people I ever saw. I saw a little bit of the flattery and it oozed out. He was ugly, ugly deeply inside."

Interestingly, when director Martin Scorsese was casting the film and thought of Alda for the villanous role, DiCaprio disagreed, saying Alda was too nice for that part.

"We only had to work together for a couple of days to realize how wrong he was about that," Alda says, joking. "I've played a lot of bad guys. The funny thing is people don't remember, so that's good. I get to surprise them all of the time. But I'm afraid after this movie comes out, I think my cover is blown. They're going to find out what I'm really like now."

Brewster tried to steal Hughes' airline and hand it over to the owner of Pan Am, Alda notes. This powerful man tried to bring down Hughes with a public investigation, only to have the tables turned on him.

Alda explains, "I think the wonderful thing in this story is that Hughes has descended into madness and he finds out he has to go to this hearing and defend himself in front of television cameras for the first time. They had never televised a hearing before. He has to pull himself together and he hates crowds and he has to defend himself. And you should see the News Reels of this. We used what they said almost verbatim. It was an amazing dialogue. Hughes did pull himself together and got the whole country on his side. He was really a national hero, which I didn't know before this."

About Hughes, Alda says, "He was the first billionaire in the country, real billionaire. He invented airplanes. He was an engineer. He flew them like a daredevil. He was a courageous guy. He made movies and that's before you get to his regular job of trying to sleep with everybody in Hollywood."