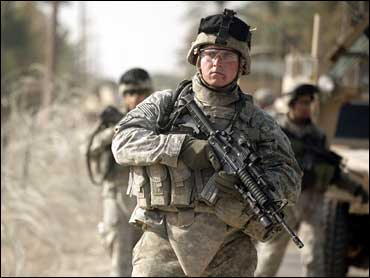 Many U.S. military commanders in Iraq believe they have dealt a large enough blow to al Qaeda in Iraq to declare victory over the group, according to a report in the Washington Post.

The Iraq franchise of Osama bin Laden's terror network has been deemed the deadliest threat facing American forces and their allies since shortly after the 2003 invasion that toppled Saddam Hussein.

U.S. generals tout recent successes against the Sunni militants as evidence that al Qaeda in Iraq, known by the acronym AQI, may have been dealt a blow from which it cannot recover.

The Post report sites evidence such as the dramatic reduction in suicide bomb attacks - considered a hallmark of al Qaeda worldwide - from more than 60 in January to about half that per month since July.

One senior military intelligence official told the paper that the captures of several AQI leaders during the summer had produced a "cascade effect," leading to the death or arrest of others in the ranks.

Officials also point to a reduction in the numbers of militants coming into Iraq from Syria. However, the Post reports that there is no consensus on why that movement of bodies has slowed - and some intelligence indicates it may be due to al Qaeda shifting its focus from Iraq to other areas.

The Bush administration has also touted the success of native Iraqi Sunni groups that have banded together to fight al Qaeda - which is predominantly Sunni, but seen by many Iraqis as another invading force on their land.

For months, the so-called "Anbar Awakening" has drawn official support and praise from U.S. officials. The movement was backed by American officials and saw prominent Sunni sheiks from the Anbar Province - previously one of the most deadly areas in Iraq - take up arms against AQI.

Anti-al Qaeda sentiment in the Sunni areas of Iraq appears to be growing, with the announcement last Thursday of another coalition pledged to fight foreign militants on Iraqi soil.

In a video first broadcast on an Arabic news channel and then found by CBS News on an extremist Web site, six of the most prominent domestic Sunni jihadist groups declared the formation of the "Political Council of the Iraq Resistance".

The Council is not, like the Anbar group, a U.S.-allied coalition of tribal leaders, and is not in any way supported by America or its allies - it is a coalition of militant jihadist groups who still vow to fight U.S. forces in Iraq.

However, the Council pledges in its introductory announcement to battle all "foreign occupation and foreign influence" in Iraq. Very few al Qaeda militants are Iraqis, and there presence is increasingly seen as an effort to divide the country and exacerbate sectarian strife.

The statement vows that militant operations will target only "the occupiers and their agents, and do not target the innocents and the vulnerable ones". This declaration is a move to label al Qaeda, whose chief tactic has been suicide attacks which leave scores of civilians dead, as an enemy.

Despite facing growing animosity from the native population, and the recent successes of the American military and its allies, some intelligence experts warned the Washington Post that a declaration of victory over the group could be inaccurate, and even dangerous.

"I think it would be premature at this point," a senior intelligence official told the paper, adding that AQI still has "the ability for surprise and for catastrophic attacks".

The Post reports that "earlier periods of optimism… not only proved unfounded but were followed by expanded operations by the militant organization." One example mentioned was the period after the killing of Abu Musab al-Zarqawi in 2006.