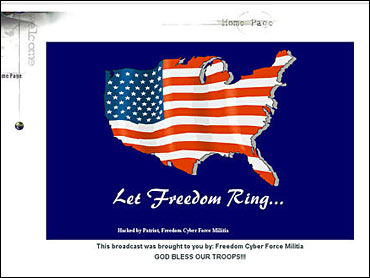 A Web designer was sentenced to community service for hacking into the Web site of the Arab satellite news channel Al-Jazeera and redirecting its traffic to a site showing an American flag and the words "Let Freedom Ring."

John William Racine II, 24, was ordered Wednesday to perform 1,000 hours of community service and pay $2,000. He pleaded guilty in June to felony charges of wire fraud and unlawful interception of an electronic communication.

U.S. District Judge A. Howard Metz said during the sentencing hearing that he believed Racine "immediately recognized how much terrible havoc" was caused by the hacking.

Racine's plea agreement indicated that he acted after learning in March that Al-Jazeera's Web site had posted photos of American prisoners of war and soldiers killed during the U.S. invasion of Iraq.

Representatives at Qatar-based Al-Jazeera have said they believe more than one person was responsible for hacking their site during the invasion.

Aljazeera.net was subject to several attacks in March, including one where visitors were redirected to a pornography site. But authorities suspect Racine acted alone, forging documents to have the Web site's password changed. That provided unhindered access to the site and blocked access by its legitimate administrators, according to the plea agreement.