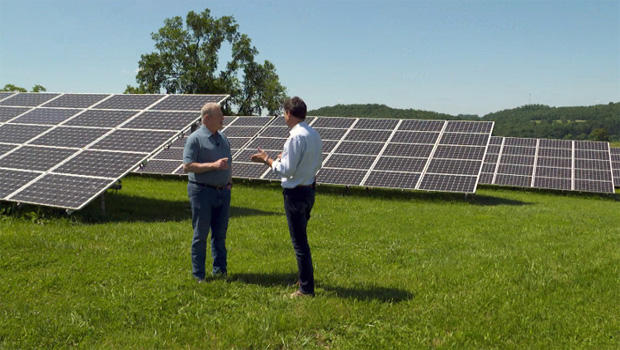 A huge iceberg -- said to be the size of Delaware -- broke off from the Antarctic Peninsula. It's one of the largest ever recorded. But scientists differ on whether it can be blamed directly on climate change. Still, former Vice-President Al Gore called the floating giant "a jarring reminder of why we must solve the climate crisis." Gore has been a crusader on that issue for years now, and took Lee Cowan back to Tennessee to take stock of the battle in our "Sunday Morning" Cover Story:

Meandering through the rolling green hills of Carthage, Tennessee, is the Caney Fork River -- a place where Al Gore seems right at home.

"This place down here is where, when I was a boy, my family used to come down here and go swimming," he showed Cowan.

Yes, he's the man who was almost President, and yes, that is a pretty tough act to follow.

And yet, Al Gore has still made his voice heard -- and not just echoing off those limestone cliffs on the Gore family farm.

"One time when Winston Churchill lost an election as a young man, one of his friends said, 'Winston, this is a blessing in disguise.' And he said, 'Damn good disguise!'  So that's sort of the way I feel about it.

"When I went through that experience in the election of 2000 and the Supreme Court decision, I knew I was going to be fine. And I hated the result, obviously, but I just started looking for other ways I could be of service."

So he dusted off an old slideshow that he had once used to convince his colleagues in the House and the Senate that global warming was a provable environmental threat. And in 2006, that wonky slideshow became an Oscar-winning documentary.

"An Inconvenient Truth" made him the face of the climate debate. It helped him win a Nobel Peace Prize -- and it put him right back in the political crosshairs.

Cowan said, "You faced some pretty stiff criticism from people that called you everything from a fanatic to a fraud."

"Yeah. When I spoke at my father's funeral, I quoted a passage from scripture, 'Woe unto him about whom all men say good things,'" Gore laughed. "If everybody's just completely happy with what you're doing, you may not be working hard enough to bring about the kind of change that we need!"

He's still fighting for change, and he's still giving that slideshow … over 100 times a year, if you can believe that.

"16 of the 17 hottest years ever measured with instruments have been since the year 2001."

It's enough to discourage anyone living anywhere on the planet. But Gore also sounds a hopeful note -- he's even humorous at times.

"The Vatican has made a commitment to be the first carbon-neutral nation. Now, they have two advantages: they're very small, and God is on their side."

On this day it was an audience of about a thousand outside Seattle who lined up not just to hear Gore's presentation, but to learn how to give it themselves.

"Do you ever get tired of giving the slide show? Does it ever get old?" Cowan asked.

"Honestly it does not for me, because I really have a strong sense that this is what I'm supposed to be doing," Gore replied. "And that makes me want to do more."

He's been holding these Climate Leadership Training sessions for about a decade now, to help spread the word about climate change, and to engage those who say it simply doesn't exist.

"The truth about the climate crisis is still inconvenient to the large carbon polluters, and so they want to bob and weave and dodge the truth and pretend like it's still a big controversy," Gore said. "And it's not."

The success of his first film lead him to take to the big screen again. "An Inconvenient Sequel: Truth to Power," which played at the Cannes Film Festival in May, opens nationwide later this summer.

As he says in the film, "It is right to save the future for humanity. It is wrong to pollute this Earth and destroy the climate balance. It is right to give hope to the future generations."

"You're a movie star in a lot of respects," Cowan laughed.

"No, you really are! It's you and Wonder Woman this summer!  It is."

For two years cameras followed Gore on his climate crusade, from high above the melting glaciers of Greenland, to the streets of Miami Beach, where he found officials trying to raise road levels to match the predicted rise in sea levels.

"It's no longer just the virtually unanimous scientific community telling us we've got to change," he said. "Now Mother Nature has entered the debate. Every night now on the television news is like a nature hike through the Book of Revelation.  People who don't want to use the phrase 'global warming' or 'climate crisis' are saying, 'Wait a minute. Something's going on here that's not right.'"

Much of the film takes place at the Paris Climate Conference two years ago, where 196 nations (including the U.S.) agreed to a reduction in greenhouse gas emissions.

It was unprecedented. But back home, the political winds were blowing in Donald Trump's direction -- and Gore feared it was about to be a whole new world.

Cowan said, "You've spent half your life in politics, some of it as the highest levels …"

"Second-highest level. Excuse me, Mr. Vice President, that's right.  What do you make of this young administration so far?"

His biggest worry was what might be un-done if Mr. Trump kept his campaign promise to pull out of the Paris Accord. He tried more than once to change Mr. Trump's mind -- even visiting him at Trump Tower before the inauguration.

When asked if he found the president-elect receptive to his argument, Gore said, "I found him attentive, and you can misinterpret that for being receptive. But yes, I did think that there was a real chance that he would come to his senses on this."

But in June, President Trump announced that he was withdrawing the United States from the Paris Climate Agreement.

"The President has made this an economic argument, that there just isn't room, essentially, in the economy to be sustainable and at the same time provide jobs, and a lot of his base believes that," Cowan said.

"Well, the business community does not believe that at all," Gore replied. "There are now twice as many jobs in the solar industry as in the coal industry. Solar jobs are growing 17 times faster than other jobs in the U.S. It's one of the brightest spots in our economic revival."

And never before, he says, have the solutions to climate change -- wind, solar and electric technologies -- been as cheap or as readily available.

"And that has to make your argument easier?" Cowan asked.

"Yeah, it's true. I look back at where the facts and figures were ten, 11 years ago, and the curve on solar energy was just beginning to start moving up. Now it's way up here."

Al's father, Albert Sr. (a three-term U.S. Senator), once grew tobacco on the Gore family farm. Now solar panels sprout out of this Tennessee soil -- and so does an organic fruit and vegetable garden.

"The entire farm, the barn, the food processing, the house, all of it runs on 100% renewable energy now," Gore said.

As second acts go, Al Gore found a path that will still land him in the history books.  Maybe not as a U.S. President, but when it comes to those fighting climate change, he's a world leader nonetheless.

"I could not lay this down or put it aside even if I wanted to, and I don't want to," he said. "Those who feel despair should be of good cheer, as the Bible says. Have faith, have hope. We are going to win this."

To watch a trailer for the documentary "An Inconvenient Sequel: Truth to Power," click on the video player below.