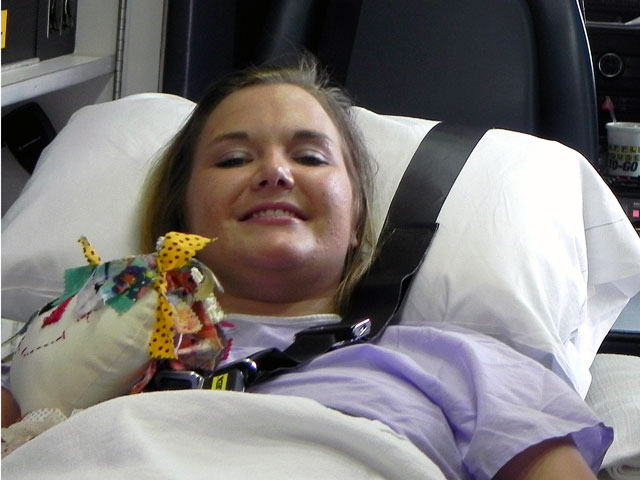 On Wednesday, Copeland returned to her Snellville, Ga. home after spending more than 50 days in a Georgia rehabilitation center.

"As soon as we got back home she flopped down on the sofa, flipped on the TV and started watching 'Futurama,'" Andy Copeland told the Gwinnett Daily Post with a laugh.

After picking her up from her rehabilitation facility around noon Wednesday, the family went out to eat together before planning a movie night complete with "The Hunger Games" DVD and a chocolate chip sheet cake, according to the paper.

The 24-year-old graduate student had developed necrotizing fasciitis after the flesh-eating Aeromonas hydrophila bacteria entered a deep cut she got during a May 1 zip-lining accident on the Tallapoosa River. The bacterial infection emits toxins that cut off blood flow to parts of the body, destroying muscles, fat and skin tissue.

As a result, Copeland needed her leg, right foot and both hands amputated.

Copeland defied doctors' expectations with a rapid recovery. Her father says they at first gave her just a slim chance of surviving, and she spent weeks sedated and breathing on a respirator.

Throughout her ordeal, Copeland inspired millions with her courage and positive outlook as her father Andy would update the public through a blog he kept. She would struggle with pain as her condition was upgraded from critical to serious, initially refusing medicationsbecause she studied holistic treatments for pain for her master's thesis in psychology at the University of West Georgia.

On July 2 after two months at Doctors Hospital in Augusta, Copeland left for rehab at the Shepherd Center in Atlanta, where for nearly two months she learned to move, eat, bathe and care for herself without prosthetic limbs.

Andy Copeland said his daughter took to rehab with the same determination she had for her recovery,"knocking it out" as if she was training for the Olympics. During physical therapy sessions she'd complete 400 leg lifts in seven minutes, 200 crunches in seven minutes, in addition to pushups and planks. Throughout, she maintained she wanted to be independent despite "inconveniences" of lacking her hands and feet.

"Aimee's focus remains on one thing and one thing only: not being 'handicapped,' Andy wrote at the end of July. "If hard work is any indication, I think we can all surmise that she is well on her way toward achieving that goal."

This Wednesday with two trips in the family car to haul all of her things, and the bumper nearly dragging on the ground, Copeland moved back home Wednesday, her father said.

"It was almost like you were bringing a kid home from college," Andy Copeland said in a phone interview Thursday. "When we got back home, Aimee rolled around in her room and she was really laughing it up."

She returned to a home that had received a major makeover. A homebuilder, Pulte Homes, added a 1,956-square-foot living space for Copeland onto her parents' home. It includes a bedroom and bathroom with wheelchair-accessible features; wider doorways; an exercise room with parallel bars and other equipment; and an elevator between the addition's two floors. The $200,000 job was paid for by donations, at no cost to the Copeland family.

Copeland also got her first dinner outing and chose the steakhouse where her sister works, her father said. She dined on shrimp stew and spinach dip.

"She's actually very successful and is able to get around a good bit," Copeland's father said. "Last night she never wore a prosthetic limb the whole day. She was eating and drinking and taking care of herself without ever putting a prosthetic on."

He said his daughter is still adjusting to using prosthetic limbs and often finds them uncomfortably hot and itchy. Even without them, she's learning to pick up and use pens and other utensils by pressing her arms together to grip them. She also has special cuffs that fit on the ends of her arms that can hold a toothbrush, a fork or a spoon.

Andy Copeland said it's unclear when his daughter will be able to return to school to finish her graduate thesis at West Georgia University. The campus is 75 miles from her parents' home.

For now, he said, Copeland is just happy to be home.

"Right now her mental condition is wonderful, her health is good and her energy level is high," Copeland's father said. "She's doing great."