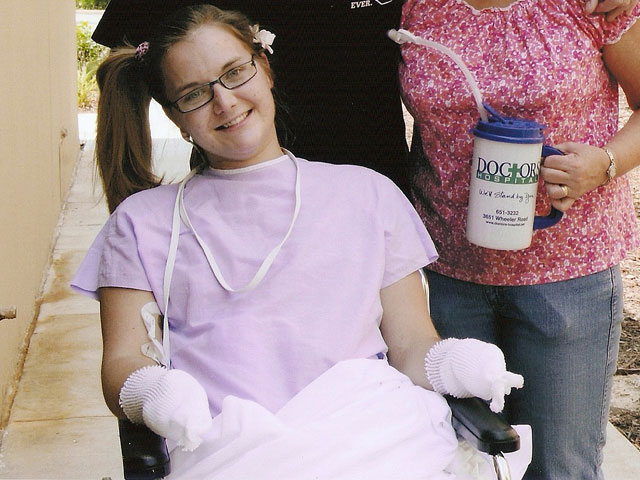 (CBS/AP) A Michigan-based builder, Pulte Homes, will construct a new wing onto the home of Aimee Copeland, a 24-year-old Georgia woman who's been recovering from a flesh-eating disease.

The 24-year-old graduate student at West Georgia University suffered a deep cut May 1 when she fell from a broken zip-line over a west Georgia river. She then contracted a rare infection called necrotizing fasciitis, which releases toxins that cut off blood supply to parts of the body, destroying muscle, fat and skin tissue.

Doctors had to amputate Aimee's leg, foot and both hands. She's now recovering at an east Georgia rehabilitation center.

Executives with Pulte Homes of Bloomfield Hills, Mich., say its workers and partners are volunteering to construct the two-story 1,956-square-feet addition to Copeland's suburban Atlanta home at no charge to the family. Company officials said in a press release that the addition is expected to be completed within 40 days of when Aimee returns home from rehabilitation.

The addition will include a new bedroom, a fitness room for rehabilitation, a study area and an elevator to access other parts of the home, such as the kitchen.

"Aimee's story and recovery has inspired many of us here at Pulte, and we were compelled to find a way to help," Stephen Haines, vice president of sales for Pulte Homes in Georgia, said in the statement.

In a new post from Aimee's father's blog, Andy Copeland wrote that his daughter was "knocking it out" in rehab and her efforts were on par with those of elite athletes.

"I sat with her today, watching her determined effort as she exerted herself through her exercise regimen," wrote Andy Copeland. "Her face was red and the vein in her neck was bulging as she pressed herself into her repetitions with serious determination. It's like she was training for the Olympics."

Next Aimee will be fitted with test sockets to see If she can eventually get prosthetic limbs.