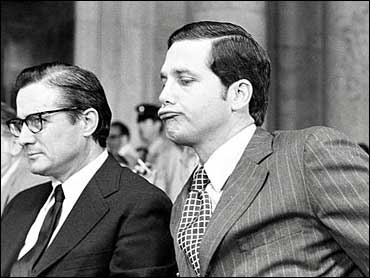 Coming forward three decades after Watergate, a former top aide to President Richard Nixon now contends that Nixon ordered the break-in that would lead to his resignation.

Jeb Stuart Magruder previously had gone no further than saying that John Mitchell, the former attorney general who was running the Nixon re-election campaign in 1972, approved the plan to break into the Democratic Party headquarters at the Watergate office building near the White House and bug the telephone of the party chairman, Larry O'Brien.

Magruder, in a PBS documentary airing Wednesday and in an Associated Press interview last week, says he was meeting with Mitchell on March 30, 1972, when he heard Nixon tell Mitchell over the phone to go ahead with the plan.

Whether Nixon had advance knowledge has gone unanswered for three decades since former Sen. Howard Baker of Tennessee first asked, at hearings of the Senate Watergate Committee, "What did the president know, and when did he know it?"

Magruder, who pleaded guilty to conspiracy and perjury charges stemming from the break-in and spent seven months in prison, explained his three decades of silence on Nixon's culpability by telling the AP on Friday: "Nobody ever asked me a question about that."

Some historians doubt the allegation by Magruder, who was Nixon's deputy campaign director, an aide to Nixon's chief of staff, H.R. Haldeman, and deputy communications director at the White House. Stanley Kutler, an expert on Nixon's White House tapes, called it "the dubious word of a dubious character."

Magruder made the assertion on a PBS documentary, "Watergate Plus 30: Shadow of History." He elaborated in the AP interview.

The way Magruder tells the story, Nixon knew everything from the beginning.

Magruder says that on March 30, 1972, he met with Mitchell and discussed a plan by G. Gordon Liddy, a former FBI agent, to break into the Democratic Party headquarters to bug O'Brien's phone.

Magruder told the AP he knew it was Nixon "because his voice is very distinct, and you couldn't miss who was on the phone."

Magruder said he could hear Nixon tell Mitchell, "John, ... we need to get the information on Larry O'Brien, and the only way we can do that is through Liddy's plan. And you need to do that."

Mitchell got off the phone, Magruder said, and told him: "Jeb, tell Maury Stans to give Liddy $250,000 and let's see what happens." Maurice Stans was Nixon's commerce secretary and later was chief fund-raiser for the re-election campaign as head of the finance committee.

Magruder concedes that he did not hear every single word while Nixon was on the phone with Mitchell, but "I heard the import," he said.

Mitchell, Haldeman, Stans and Nixon are all dead.

Magruder insisted in the AP interview that he was not asked previously whether Nixon personally authorized the break-in.

Referring to the Senate Watergate hearings, he said, "If you look at the testimony, you won't find anything." Magruder said he testified truthfully, and had he been specifically asked if the president had been involved, "I would have told the truth."

Former White House counsel John Dean said he was surprised when Magruder recently told him that Nixon gave advance encouragement to the break-in.

"I have no reason to doubt that it happened as he describes it, but I have never seen a scintilla of evidence that Nixon knew about the plans for the Watergate break-in or that the likes of Gordon Liddy were operating at the re-election committee," Dean said.

Historian Kutler, author of "The Wars of Watergate" and several other books, said he is skeptical. He is an expert on Nixon's White House tapes, crucial evidence in the 1974 vote by the House Judiciary Committee to recommend Nixon's impeachment. Nixon resigned within days of that vote.

"You've got the dubious word of a dubious character," Kutler said.

If there had been such a phone conversation between Nixon and Mitchell, Kutler said, there should be a White House tape recording of it.

John Taylor, executive director of the Richard Nixon Library & Birthplace Foundation, said there is no evidence that Nixon ever gave such an order.

"Indeed, all existing evidence demonstrates that he was shocked and surprised that it had occurred and spent weeks, if not months, attempting to find out why," Taylor said.

After Magruder's prison time, he became a Presbyterian minister. Dean went to prison for four months for his role in the scandal. Haldeman and Mitchell also served prison terms.

In all, 25 people went to jail for their roles in the break-in or the attempt to cover it up.