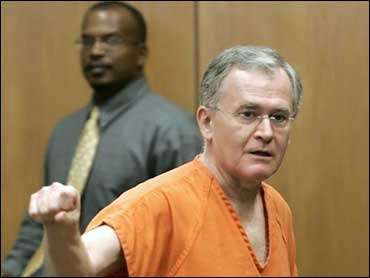 A former Department of Homeland Security press aide accused of having sexually explicit conversations with someone he thought was a teenage girl posted bail Thursday and was released from jail.

He appeared in an orange jail uniform Thursday before state Circuit Judge J. Dale Durrance after being extradited Wednesday from Maryland, where he has been held without bond since his arrest April 4. His arraignment was set for May 23.

"This is a nightmare for anyone," Doyle's attorney, Barry H. Helfand, said outside court. "He was depressed when he left Maryland. He is just as depressed now. To say the least, he is very, very frightened about what is going to happen."

Doyle, who resigned from the department, allegedly provided his government-issued office phone and cell phone numbers, showed off his department ID and may have used his official computer in the communications with an undercover Polk County sheriff's detective who was posing as the 14-year-old girl.

"Very graphic descriptions were sent by Mr. Doyle to the 14-year old about what he wanted to do to her sexually," the detective, Sandy Scherer, told the judge during the hearing.

Scherer said that while posing as the girl, she talked to Doyle on the phone after he made initial contact with another detective on the Internet March 12. She said Doyle tried to arrange a meeting with the girl in Florida on a date when she wouldn't be menstruating.

Doyle did not speak in court except to answer "yes, sir" when the judge asked if he understood his rights. Helfand said he would get at least two mental health professionals to examine Doyle as part of his defense.

If convicted, he could spend the rest of his life in prison, Helfand said.

Doyle posted 10 percent of the $230,000 bail Thursday, sheriff's spokeswoman Carrie Rodgers said. He planned to fly back to Maryland with his attorney later Thursday, she said.

This is not the first time Doyle's alleged Internet habits have got him in trouble. A source told CBSNews.com that while working at Time magazine's Washington bureau, managers discovered that Doyle had been looking at pornography on a receptionist's computer late at night.

He admitted to the incident, was reprimanded, and was asked to give a formal apology to staffers, the source said.

The source described Doyle as friendly, well-liked and respected by the people in the Time office, who were "shocked" to learn what he'd been doing.