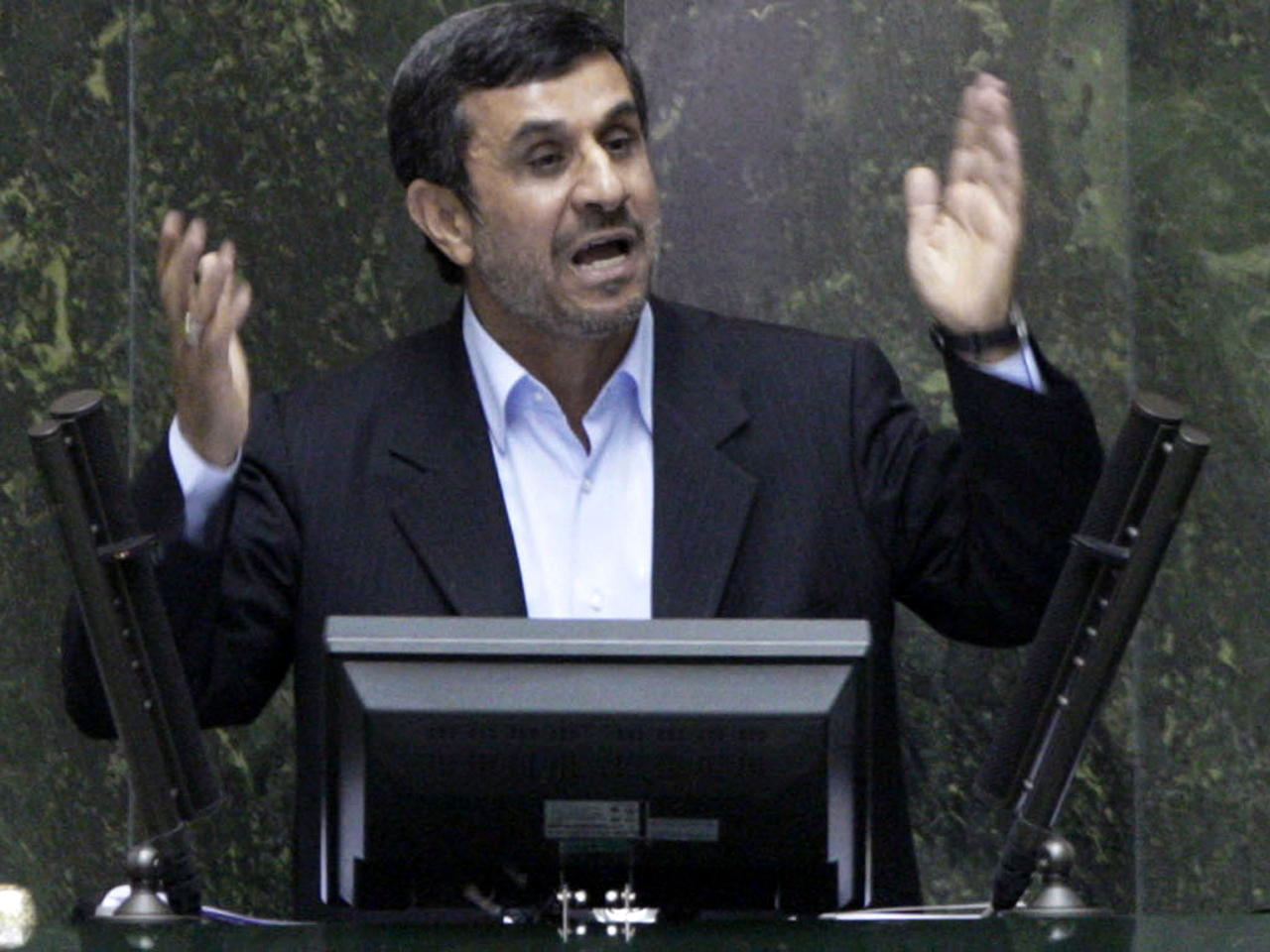 (AP) TEHRAN, Iran - Iran's parliament grilled President Mahmoud Ahmadinejad on Wednesday over a long list of accusations, including that he mismanaged the nation's economy and defied the authority of the country's supreme leader.

Ahmadinejad is the first president in the country's history to be hauled before the Iranian parliament, a serious blow to his standing in a conflict pitting him against lawmakers and the country's powerful clerical establishment.

Iran's constitution gives parliament the legal right to question the president, but the body had never before taken a step that undermined Ahmadinejad's prestige and could set the stage for his subsequent impeachment should lawmakers determine his answers were unsatisfactory.

Ahmadinejad sniped back defiantly at his questioners, provoking the wrath of the chamber with jabs and sarcastic jokes. The disrespect drew strong condemnation from the lawmakers.

"If the parliament had supported Ahmadinejad before today, it's now lost," said lawmaker Mohammad Taqi Rahbar.

Rahbar like many other conservatives supported Ahmadinejad prior to April 2011, when the president publicly challenged Supreme Leader Ayatollah Ali Khamenei, who has final say on all matters of state, over the appointment of the intelligence chief.

This — combined with the president's perceived reluctant to heed expert economic advice — has convinced many hard-liners that Ahmadinejad wanted to expand the powers of the Iranian presidency that was previously subordinate to clerical leaders.

Conservative lawmaker Ali Motahari, a prominent opponent of the president, read out a series of 10 questions to Ahmadinejad in an open session of parliament broadcast live on state radio.

Some of the most hard-hitting focused on Ahmadinejad's refusal for 11 days to implement an order from Khamenei to reinstate intelligence minister Heidar Moslehi, who had been sacked by the president in April 2011.

Ahmadinejad flatly denied that he challenged Khamenei, answering as though there had never been any showdown with the supreme leader.

The president, who appeared in parliament accompanied by eight senior Cabinet members, was also asked about a dramatic hike in prices that has caused public dissatisfaction and his failure to provide a budget to Tehran's subway system.

He was accused of speeding up implementation of an austerity plan to slash energy and food subsidies, raising prices for the middle class and the poor.

Ahmadinejad claimed his government has provided more money to municipalities than previous governments, and said price hikes has nothing to do with slashing subsidies.

Other biting questions were directed at Ahmadinejad's support for his protege and top aide, Esfandiar Rahim Mashaei, who hard-liners accuse of heading a "deviant current" that sought to undermine Islamic rule and compromise the Islamic system. Some critics have even claimed that Mashaei conjured black magic spells to befuddle Ahmadinejad's mind.

Dozens of Ahmadinejad's political backers have been arrested or hounded out of the public eye by hard-line forces in recent months. Mashaei has been effectively blocked from his alleged goal of succeeding Ahmadinejad when the president's term expires in 2013.

Instead of directly replying to the question, Ahmadinejad simply said he supports Iran's "history" and doesn't regret doing so.

Ahmadinejad repeatedly claimed he wants to share "jokes" with the lawmakers.

"Here is not a place to share jokes. This is the parliament. The president has no right to insult the legislature," lawmaker Mohammad Reza Khabbaz told the chamber angrily.

Ahmadinejad's closing words caused some of the largest uproar.

"It was not a very difficult quiz," he said of the questioners. "To me, those who designed the questions were from among those who got a master's degree by just pushing a button. If you had consulted us, better questions could have been drawn up," he said.

The president said he must be given a top score on the "quiz." "Be fair. Give a good grade. Any grade of less than 20 (perfect) will be rude," he said.

Many lawmakers angrily denounced Ahmadinejad's performance, saying he insulted the elected parliament instead of responding to questions politely.

"The president's language was insulting during his entire speech. He escaped answering the questions. As predicted, we didn't receive any logical answer from the president," lawmaker Mostafa Reza Hosseini said.

"The parliament is now very much against the president. He didn't respect the house," parliamentarian Ghodratollah Ali Khani said. "Hopefully, the next step is Ahmadinejad's impeachment."

His bitter opponent, former president Hashemi Rafsanjani, was reappointed for another five-year term as the head of the Expediency Council, a body that advises Khamenei on key issues.

Separately, Iran's judiciary chief said he won't allow members of a supervising council recently set up by Ahmadinejad to oversee the work of his branch.

Ahmadinejad had established the council to monitor the implementation of the country's constitution — a responsibility usually under Khameni's control.

"We won't allow inspectors and members of this council to the judiciary," state TV website quoted Ayatollah Sadeq Larijani as saying.