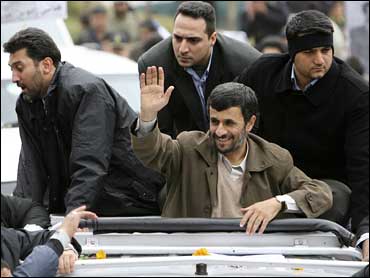 The U.S. intelligence report released Monday concluded that Iran had stopped its weapons program in late 2003 and shown no signs since of resuming it, representing a sharp turnaround from a previous intelligence assessment in 2005.

"This is a declaration of victory for the Iranian nation against the world powers over the nuclear issue," Ahmadinejad told thousands of people during a visit to Ilam province in western Iran.

"This was a final shot to those who, in the past several years, spread a sense of threat and concern in the world through lies of nuclear weapons ... Thanks to your resistance, a fatal shot was fired at the dreams of ill-wishers and the truthfulness of the Iranian nation was once again proved by the ill-wishers themselves," Ahmadinejad said, drawing celebratory whistles from the crowd.

Iran has touted the new U.S. intelligence report as vindication of its claims that its nuclear program is peaceful and Iranian officials insist that Washington should take a less hawkish stance and drop attempts to impose new sanctions in light of the report's surprise conclusions.

President Bush defended his approach Tuesday, and Secretary of State Condoleezza Rice said it would be a "big mistake" to ease any diplomatic pressure on Iran despite the new U.S. findings.

Trying to keep pressure on Iran, Mr. Bush called on Tehran Wednesday to "come clean" about the scope of its nuclear activities or else face diplomatic isolation.

Mr. Bush demanded that Tehran detail its alleged previous program to develop nuclear weapons "which the Iranian regime has yet to acknowledge."

"The Iranians have a strategic choice to make," he said. "They can come clean with the international community about the scope of their nuclear activities, and fully accept the long-standing offer to suspend their enrichment program and come to the table and negotiate, or they can continue on a path of isolation."

"I continue to see Iran as a dangerous power in international politics," Rice told reporters traveling with her to Ethiopia where she planned to see African leaders. "At this moment, it doesn't appear to have an active weaponization program. That, frankly, is good news. But if it causes people to say, 'Oh, well, then we don't need to worry about what the Iranians are doing,' I think we will have made a big mistake."

Regarding Ahmadinejad's claim of a "victory" in the nuclear war of words, Rice said, "I am not going to comment on that comment except to say that what the National Intelligence Estimate shows, and the transparency with which the administration released it, is what it means to live in a democracy and I hope one day that the people of Iran will be able to live in a democracy too," she said.

The U.S. intelligence agencies new assessment comes at a time of escalating tensions between the United States and Iran, which President Bush has labeled part of an "axis of evil," along with Saddam Hussein-era Iraq and North Korea.

The United States and some of its allies accuse Iran of seeking to develop nuclear weapons, a claim denied by Iran, which says its nuclear program aims only to generate electricity.

Iran has rejected two U.N. Security Council resolutions demanding that it halt uranium enrichment, a process that can produce either fuel for a reactor or a nuclear warhead.

(AP Photo/Lawrence Jackson)
Rice, seen at left, urged nations such as China and Russia not to harden their stance against a new round of sanctions.

"People need the opportunity to absorb what they've heard," Rice said. "We have been completely transparent about what the intelligence assessment says. And people need a chance to read it. When they do that and when they read it in its detail and nuance, they will be able to see the points that I have made."

But some analysts said it may be hard to maintain support for a swift new U.N. resolution that would further restrict trade with Iran.

"An enormous effort has been invested to date in trying to bring the Russians, Chinese and Europeans on board with the current sanctions... and this report doesn't appear to have been widely anticipated among our allies," said Suzanne Maloney, a foreign policy senior fellow at the Washington-based Brookings Institution.

"Now you have the U.S. intelligence community coming out and saying formally that Iran halted its weapons program four years ago. This will certainly undercut any push to get new sanctions," she added.

CBS News correspondent Elizabeth Palmer reports the sanctions already in place against Iran, the most recent battery of which were enacted about a year ago, are having a serious impact.

Half the Iranian population is 20-years-old or younger, which means the regime is going to have to create a vast number of new jobs in the coming years - a task that would be made virtually impossible if new investment and trade ties were further restricted by punitive international measures.

European and U.N. officials said the report bolsters their argument for negotiations, and that the international community should not walk away from years of talks with an often defiant Tehran that is openly enriching uranium for uncertain ends.

They also said sanctions are still an option to compel Iran to be fully transparent about its nuclear program.

Indeed, some European allies, including Britain, France and Germany, have continued to support - even lead - the push for further economic measures against Tehran.

Palmer reports, however, that some officials in Europe question the timing of the new U.S. intelligence report, and wonder if it reveals a stark difference in opinion between America's political and military leaders. (Read Palmer's Reporter's Notebook)

But China - a veto-wielding member of the U.N. Security Council - said the report raises second thoughts about new sanctions. U.S. and French officials had said only a day earlier that long-resistant China was warming to a new resolution.

"I think the council members will have to consider that, because I think we all start from the presumption that now things have changed," China's U.N. Ambassador Wang Guangya said Tuesday when asked whether the release of the new intelligence estimate made the prospect of new U.N. sanctions less likely.

In Moscow, Russian Foreign Minister Sergey Lavrov made comments Wednesday that contradicted assertions by President Bush that Iran had had a clandestine weapons program in the past, and could start another one. That was the basis of Mr. Bush's argument for keeping pressure on Tehran by way of sanctions and monitoring.

"Data that we have seen don't allow to say with certainty that Iran has ever had a nuclear weapons proram," Lavrov said, asked to comment on the U.S. intelligence report