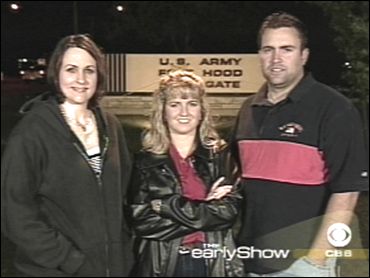 Five of the seven American POWs received a Texas-sized welcome when they returned to their home base over the weekend. The group was greeted with cheers, tears, and a whole lot of red, white and blue.

One of those soldiers was James Riley of Pennsauken, N.J. He spent the day with family members on Sunday, sequestered at Fort Bliss, where all the former POWs will begin to ease back into life in the United States.

Riley, 31, a sergeant with 507th Maintenance Company based there, spent a subdued Easter with his mother, Jane, who had flown to Texas on Saturday. One of his sisters, who had been in a coma, died while he was in captivity.

Jane Riley said she and her son spent their time just talking about life in general. "Just sitting around and talking. Basically."

When asked if Sgt Riley considers himself a hero as others want to call him, she said to The Early Show's Hannah Storm, "Definitely not. He says the people that unfortunately have given their lives for this cause are the heroes. And of course we still have MIAs out there that we have to find."

Riley's family say the sergeant is reserved and not the kind of person to embrace massive public attention. However, his mom said he has enjoyed the warm welcome.

"Just the outpouring of the community here is fantastic," she said. "You could just feel the warmth and joy and love." But of course she says the best part for her was to hug her son.

Another soldier who enjoyed the warm embrace of family was specialist Joseph Hudson. Only 23, he spoke to the cheering crowd bringing pride to his mother Anecita.

She said finally seeing her son was overwhelming and noted her whole family was very happy to have him back.

Hudson and the other former POWs are in great shape and high spirits said, Col. Glen Mitchell. He is the medical center commander at Fort Bliss who met with them.

"We went on the airplane, they were ready to go. They had been cleared by customs and wanted to get off that airplane. We had to make sure that they were in good shape to take that golf cart ride around that crowd, and really get to greet people that were out here to welcome them back. And of course we had to check and see if we needed to have any of them carried in litters or ambulances," Col. Mitchell explained on The Early Show.

Shoshana Johnson, who suffered injuries in her ankles was not one to ride in an ambulance and miss all the fun.

Col. Mitchell said, "She was a stretcher patient on the aircraft, so that her legs wouldn't hang down and swell up during the flight. But, as I got there and offered her the option of being carried off and put in the ambulance and taken in, rather than having to get around on the golf cart, she, of course, refused immediately and said, 'Oh, no.' She's staying with her buddies. And she wanted to be part of that group coming back to Fort Bliss. And she was just full of energy. And just wanted to ride with her friends, and she told us what we were going to do."

The bond between the former POWs is pretty strong, Col Mitchell said. After going through this ordeal together, staying together plays a part in their recovery.

"We're expecting that this group will probably maintain some bonds over a very long period of time," he said, noting a team of mental health experts is working with them.

"Sort of teaching them the skills it takes to be able to deal with the emotions they're going to have. They've had the stressful experience. They've had this rescue. It's also stressful. And then they've had this great homecoming, which, of course, we're all thrilled. But it's a stress for them to be celebrities," he explained.

Throughout the week, they will go through medical testing and reintegration in the unit, Col. Mitchell said. "They have things like they need I.D. Tags. They need I.D. Cards. They need some new uniforms. They need to arrange to get their stuff out of storage."

Officers Ronald Young Jr. and David Williams were reunited with their families at Fort Hood late Saturday night, after dropping off the five other POWs at Fort Bliss.

Officer Young's brother, Mark, said his brother is making the most of the homecoming. "He's just now learning how big it was. Just like all the others. That he's been all over the TV. But he's handling it well," he said.

"I just told him that I respected him not only as our president, but as a person, and one thing that he mentioned is how the prayers of this nation have lifted him, and he has felt that," Lively said. 'I know that. I mean that hit home with me because as a family we have felt that. So it was nice to hear the president say that.'

The Youngs have not asked their relative anything about the capture. "He just wants to take a little time. And I'm sure he'll say his piece," Mark Young said.