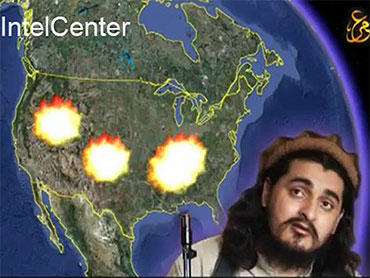 U.S. authorities have played down the potential connection between the Pakistani militant network and the car bomb attempt in New York's Times Square, saying the group does not have the global infrastructure to carry out such a strike.

"There is no credible way to prove that the Taliban have this kind of capacity to attempt such an attack in the heart of the United States," a Pakistani intelligence official told told CBS News' Farhan Bokhari on condition of anonymity. "A claim is far easier to make than to be carried out in real life."

However, the Pakistani Taliban is allied with militant networks such as al Qaeda, which could aid in expanding its reach.

Two of the videos feature Pakistani Taliban chief Hakimullah Mehsud, providing the strongest evidence to date that he survived a U.S. missile strike in January.

Police in New York found the potentially powerful car bomb on Saturday. It had apparently began to detonate but did not explode in a smoking sport utility vehicle. The vehicle contained three propane tanks, fireworks, two filled 5-gallon gasoline containers, and two clocks with batteries, electrical wire and other components, officials said.

The most substantial of the militant videos is nearly nine minutes long, according to IntelCenter, a U.S.-based group that monitors militant media. In it, Mehsud does not specifically mention New York, but says he is speaking on April 4 of this year, and promises that, "(God willing), very soon in some days or a month's time, the Muslim (community) will see the fruits of most successful attacks of our fedayeen in USA."

"Fedayeen" usually refers to suicide bombers, which the car bomb attempt in New York did not involve.

Mehsud also refutes earlier Pakistani and American claims that he died in a U.S. missile strike in January, referring to reports about his demise as propaganda.

A picture of Mehsud next to a map of the United States showing explosions in three cities coast to coast is featured in another video that surfaced, IntelCenter said. However, the map is not detailed enough to identify which cities.

The clip is 2 minutes, 19 seconds long and was purportedly made on April 19. Audio attributed to Mehsud says that the group's main targets from now on are U.S. cities, and that "good news will be heard within some days or weeks."

An additional video was about 1 minute, 11 seconds long and appears to refer to the New York scare, though it does not mention any specific location or that it was a car bomb, according to the SITE Intelligence Group, another militant media monitor.

A voice attributed to a Pakistani Taliban militant acts as if the attack was successful, and calls it revenge for the U.S. missile strike killing of ex-Pakistani Taliban chief Baitullah Mehsud as well as the recent slaying of al Qaeda in Iraq leaders Abu Omar al-Baghdadi and Abu Ayyub al-Masri. The latter two were killed by U.S. and Iraqi troops last month north of Baghdad.

SITE, which is also U.S.-based, first uncovered the video on YouTube. The tape later appeared to have been removed from the website. It was not immediately clear if militants prepared the video in anticipation of a successful attack but then removed it after the car bomb failed to explode.

In a copy of the tape provided by SITE, an unidentified voice speaking in Urdu, the primary language in Pakistan, says the group takes "full responsibility for the RECENT ATTACK IN THE USA."

The videos list grievances against the United States. One clip says the attack comes in response to American "interference and terrorism in Muslim Countries, especially in Pakistan for (the) Lalmasjid operation," a reference to the Pakistani army's 2007 storming of the Red Mosque in Islamabad where militants were holed up.

The claims in the three videos could not be immediately be independently verified, and U.S. officials have played down the group's potential involvement. New York City's police commissioner said there's no evidence of a Taliban link to the failed car bomb, while the White House has declined to comment on the claims.

If they turn out to be genuine, however, it would be the first time the Pakistani Taliban has struck outside of South Asia.

Pakistan considers the network it's No. 1 internal threat, and the army here has pursued offensives against the group that are believed to have significantly weakened it.

The network also has no known global infrastructure like al Qaeda, though it professes the same hatred of the U.S. and has threatened to attack it. In at least one past instance, the Pakistani Taliban has claimed responsibility for an attack it played no role in - a mass shooting in Binghamton, N.Y. in April 2009

Still, the Pakistani Taliban have proved remarkably resilient and crafty. For instance, since mid-January, Pakistani and U.S. officials had come to increasingly believe that Hakimullah had died in a U.S. missile strike. Only recently did the Pakistani intelligence agencies revise that assessment.

The group also is believed to have played a role in a suicide bombing at a CIA base in eastern Afghanistan that killed seven of the agency's employees late last year. Hakimullah Mehsud appeared in a video with the would-be suicide attacker, a Jordanian the agency was cultivating as an informant, in which the bomber listed grievances against the U.S.