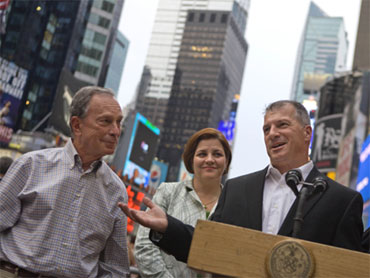 New York City Mayor Michael Bloomberg says there's no evidence so far a failed car bombing in Times Square is linked to al Qaeda or any other large terrorist organization.

Bloomberg spoke Sunday outside a restaurant in Times Square where he was to have dinner with a mounted police officer credited with evacuating the area surrounding the car.

Bloomberg notes the investigation is in its early stages. But he says: "So far, there is no evidence that any of this has anything to do with one of the recognized terrorist organizations."

Police found the car parked on one of the prime blocks for Broadway shows after being alerted by two street vendors. Thousands of tourists were cleared from the area for 10 hours.

Police are focusing on finding a man who was videotaped shedding his shirt near the SUV where the bomb was found.

Police said the gasoline-and-propane bomb was crude but could have sprayed shrapnel and metal parts with enough force to kill pedestrians and knock out windows on one of America's busiest streets, full of Broadway theaters and restaurants on a Saturday night.

The surveillance video shows an unidentified white man in his 40s slipping down an alley and taking off a shirt, revealing another underneath. In the same clip, he's seen looking back in the direction of the smoking vehicle and furtively putting the first shirt in a bag, Police Commissioner Raymond Kelly said.

Because the device did not explode and the car was not destroyed, police have a wealth of forensic evidence. And investigators are using motor vehicle logs and toll booth records to track both the car's ownership history and recent movements, Orr reports.