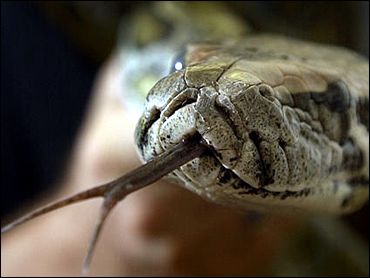 Two University of Virginia researchers believe that humans are genetically predisposed to be deathly afraid of snakes.

Judy S. DeLoache, a U.Va. professor of developmental psychology, said she has a snake phobia, but wonders why. "The question was, where did that fear come from?"

She believes it's because snakes would have posed a significant threat to our ancestors, so a fear of snakes remains hardwired into human brains today.

DeLoache said an experiment she conducted with graduate student Vanessa LoBue proved that adults and preschool children have an extraordinary ability to quickly pinpoint snakes amid harmless distractions.

They conducted three experiments with 24 adults and 24 3-year-olds. Both groups were shown a large touch-screen computer monitor that displayed nine color photographs.

The researchers found that adults and children were much faster at discovering snakes than they were at locating non-threatening flora or fauna.

The finding that children saw the snakes as rapidly as adults is particularly fascinating, LoBue said, because preschool children tend to be fearless and are less likely to have had a negative experience with snakes.

LoBue said she has found similar results when testing for an innate fear of spiders. Much like snakes, some spiders would have posed a deadly threat to pre-humans. That study is currently under peer review, she said.

"It's really neat," she said. "We have an evolutionary bias against snakes and spiders."

Julia Dixon, spokeswoman for the Virginia Department of Game and Inland Fisheries, thinks snakes have a bad rap, and said her agency spends time defending snakes.

"The general public out there thinks that the only good snake is a dead snake," Dixon said. But she notes that snakes are a key piece of the food chain because they eat mice, rats and other snakes.

Dixon said the easiest way to identify dangerous snakes in Virginia is to look into their eyes. Virginia's venomous snakes have vertical pupils, similar to a cat's eye, and harmless snakes have round pupils.

Either way, it is usually best to leave the snake alone, she said.