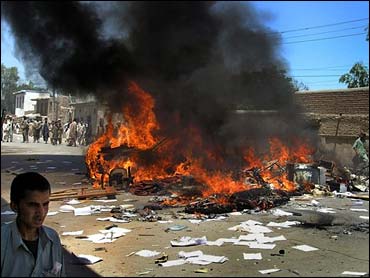 The Afghan Interior Ministry said four people were killed and 71 injured in the eastern city of Jalalabad when police opened fire to control hundreds of rioting students angered at alleged abuse of the Quran at the U.S. jail in Guantanamo Bay, Cuba.

Shouting "Death to America," demonstrators smashed car and shop windows Wednesday and stoned a passing convoy of American soldiers in the biggest outpouring of anti-American sentiment since the fall of the Taliban in 2001.

"They are very angry and are spread over all over the city," Shah said. "There are police, army and Americans shooting into the air. ... We've tried to get control but I think it is impossible."

The incident happened with Afghan President Hamid Karzai out of the country, in Brussels for a NATO meeting, where he told allies that Afghanistan will need international assistance for "many, many years to come."

An Associated Press Television News cameraman in Jalalabad said the crowds grew larger and wilder after the troops opened fire and the streets were void of traffic. Mobs pelted a government office and the local television station with rocks and tore down posters of Karzai.

Many of the injured were being treated in Jalalabad hospital for bullet wounds, said deputy health chief Mohammed Ayub Shinwari.

Students held similar but peaceful protests in cities in neighboring Laghman province and Khost, further to the south, suggesting the protests were coordinated.

The demonstrations began Tuesday, when protesters burned an effigy of President Bush over a report in Newsweek magazine that interrogators at Guantanamo Bay placed Qurans on toilets in order to rattle suspects, and in at least one case "flushed a holy book down the toilet."

In Washington, the State Department on Tuesday described the reported desecration as "reprehensible."

"Obviously, the destruction of any kind of holy book, whether it's a Bible or a Quran or any other document like that, is something that's reprehensible and not in keeping with U.S. policies and practices," State Department spokesman Tom Casey said.

Casey said the allegations are "certainly serious and it would be important to have them be looked into."

Witnesses said students also demanded the release of all prisoners from Guantanamo, and that "American troops don't stay in Afghanistan forever" - tricky issues likely to be discussed when Karzai meets Bush in Washington later this month.

The government of neighboring Pakistan - like Afghanistan, a conservative Muslim nation and close ally in Washington's war on terrorism - on Saturday said it was "deeply dismayed" over the magazine report and called for an inquiry.

The United States is holding about 520 people at Guantanamo Bay, many of them al Qaeda and Taliban suspects captured in Pakistan and Afghanistan following the Sept. 11 attacks in America.