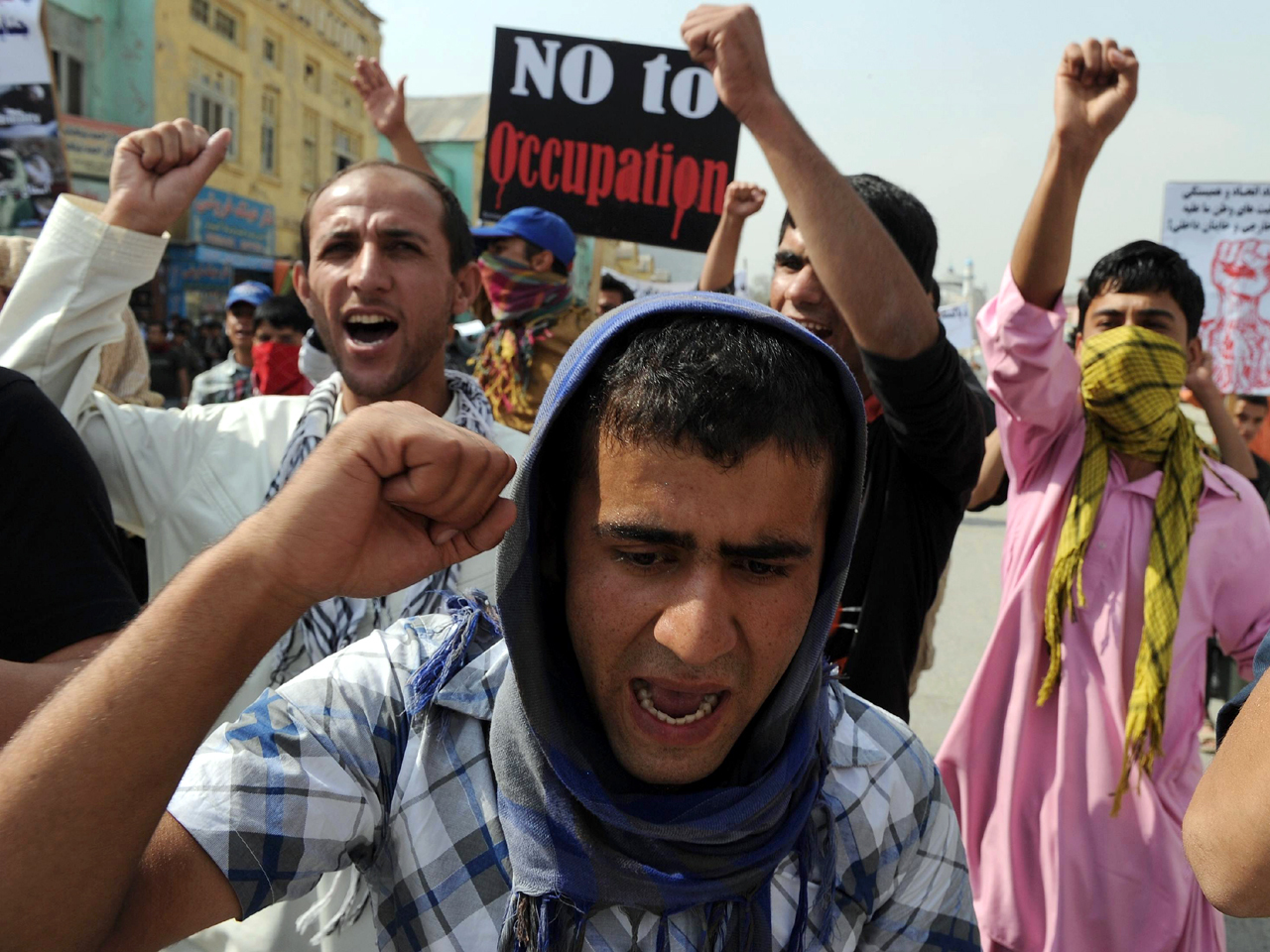 KABUL, Afghanistan - Hundreds of people marched through the streets of the Afghan capital on Thursday, demanding the immediate withdrawal of international military forces ahead of the 10th anniversary of the U.S. invasion.

The peaceful demonstration in downtown Kabul was meant to mark the Oct. 7 invasion of Afghanistan 10 years ago, following the Sept. 11 terrorist attacks against the United States.

The U.S. invasion came after Taliban leader Mullah Omar refused to hand over Osama bin Laden, purportedly because of his disbelief that the al Qaeda chief was responsible for the attacks and because it went against the Afghan tradition of hospitality and protection of guests.

U.S. forces killed bin Laden in a raid on his hideout in Pakistan in May.

The demonstrators chanted "no to occupation," and "Americans out" as they marched through the streets holding pictures of Afghans killed in violence, and later burned an American flag. The demonstration was organized by a small left wing party.

No official events have been announced so far to mark the invasion, neither by the government nor NATO.

"The United States said it came to help the Afghan people and provide a good life to Afghan people, but their true purpose was to occupy our country," said Farzana, a 22-year-old woman who goes by one name. "It is 10 years since the invasion of Afghanistan and all it has left behind is the blood of the Afghan people. We want the U.S. to leave our country."

She added that "suicide attacks, insecurity and corruption are increasing day-by-day."

In Copenhagen, military officials said a Danish soldier was seriously wounded by an explosive device during an operation Thursday in southwestern Afghanistan. The blast occurred west of a Danish base in Helmand province, the military said, providing no other details.

The Danish Army Operational Command says the soldier was taken by helicopter to a field hospital for treatment.

Denmark, which has about 750 soldiers in Afghanistan, will begin withdrawing them this year and gradually shift its role to the training of Afghan forces.

Also in Helmand, insurgents opened fire on a civilian bus traveling in the Girishk district, killing a man and a child and wounding 16 others, the governor's office reported. And in southern Uruzgan province, a car bomb killed the commander of a highway security force, Wali Jan, as he walked out of his home, the police said.

And in the southern Herat province, two Taliban gunmen shot and killed acting police chief of Shindan district as he was riding his motorcycle. Kahmir Khan was on his way to work when he was attacked, said the governor's spokesman, Mohyaddin Noori.

The U.S.-led coalition currently has more than 130,000 troops in Afghanistan, with about 98,000 from the United States.

International forces have begun handing over responsibly for security to Afghan forces and all foreign combat troops are to leave Afghanistan by the end of 2014. President Obama in July announced that he would pull 10,000 troops out of Afghanistan this year and 23,000 more by next September.