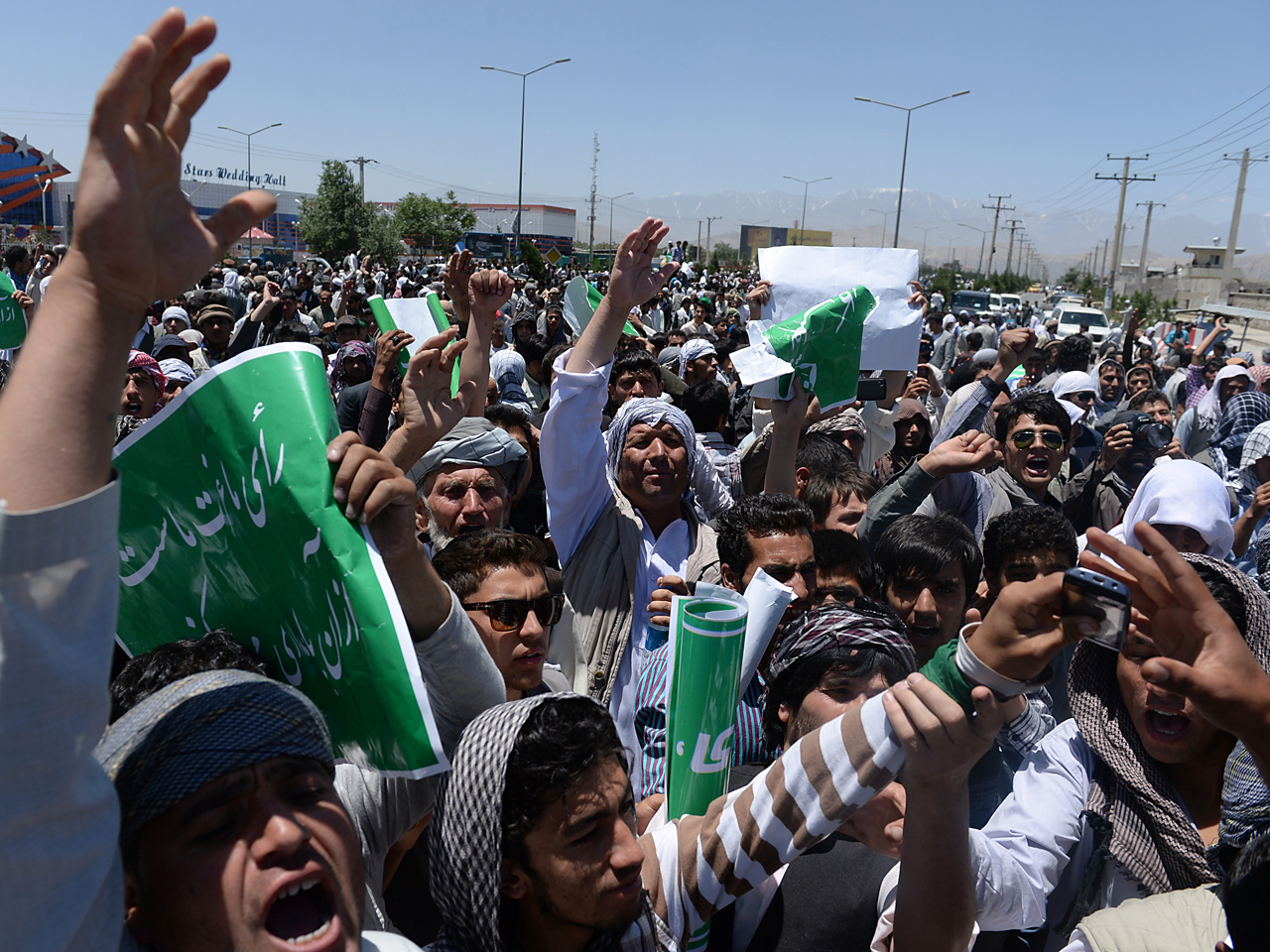 KABUL, Afghanistan -- Over a thousand people took to the streets of Kabul Saturday to protest against the alleged widespread, carefully engineered fraud in Afghanistan's run-off election for president.

Protesters supporting presidential candidate Dr. Abdullah Abdullah said they would not accept the result of the election. At one location, marchers were holding disfigured pictures of Ziaul Haq Amarkhel, the secretary of the Independent Election Commission (IEC), chanting "death to the fraudulent Amarkhel" and "death to the Independent Election Commission."

On June 14, the day of the run-off election, Afghan police stopped Amarkhel while he was transporting ballot papers without a police escort.

He was accused of fraud, by Abdullah and others, but insisted he was merely trying to rush ballot papers to several polling sites where there was a shortage.

On Saturday, protesters set up tents on some major roads, blocking traffic. At one point they blocked access to the airport for over an hour.

The political demonstrators repeated demands made by Abdullah, who has been boycotting the country's electoral commissions, and called for the immediate halt of vote-counting, saying the process is no longer legitimate.

Abdullah has accused President Hamid Karzai and both commissions of orchestrating the election in favor of his rival, technocrat and former World Bank official Ashraf Ghani Ahmadzai.

Ghani and Abdullah are facing each other in the run-off after none of the nine presidential candidates secured the minimum 50-percent-plus-1 vote threshold in the first round of the elections April 5, forcing both to compete in the second round. Abdullah accused his rival of extensive fraud in certain areas where he has a power base.

"Our gathering is against the two electoral commissions and President Karzai's orchestrated and systematic interference in the election," said Abdullah Khudadad, one of organizers of the protests. "This is only the start of the nation's complaints and we would continue it until we achieve justice ... Any violence or negative consequences of these protests would be the responsibility of the Afghan government."

Speaking with reporters Saturday, Nicholas Haysom, deputy head of the United Nations Assistance Mission in Afghanistan, said, "I think expressing one's self publicly, expressing one's concerns is a perfectly democratic right ... The position of the international community is to assure the Afghan people that we are ready to assist and support them in this political impasse, and the support we can do now is to create a bridge between those who need to talk to each other."

Abdullah had said that an option out of this political crisis could be U.N. involvement, and on Friday Karzai accepted Abdullah's call to let the U.N. intervene in the process.

Abdullah spokesman Mujeeb Rahimi welcomed U.N. involvement, saying that the U.N. can open doors for talks to solve the issues but said the campaign wouldn't recognize the counting process until its demands are met.

Abdullah said he would not resume work with the IEC unless Amarkhel was suspended from his job as secretary, evidence was provided to bolster the IEC's assertion that 7 million turned out to vote, which Abdullah calls an exaggerated number, and the commission worked to separate "clean votes" from the alleged fraudulent ballots in some eastern provinces.

IEC Chair Yusuf Nuristani declared a delay in Saturday's expected partial result announcement of the election, saying "Due to the political crisis in the country and our efforts to build confidence between the two candidates, we will not announce the partial result at this stage."

The preliminary results from the run-off are scheduled for release July 2, with the final result expected 20 days later.

If the U.N. manages to end the ongoing political crisis, Afghanistan would witness for the first time a democratic transition of political power in its history.

"We are talking to the candidates even as we speak, and to their teams," said Haysom. "And at least part of the message that we have for them - and have had really since the outset - is that there will be a winner and there will be a loser and what we expect of the candidates is to exhibit statesmanship, not gamesmanship."