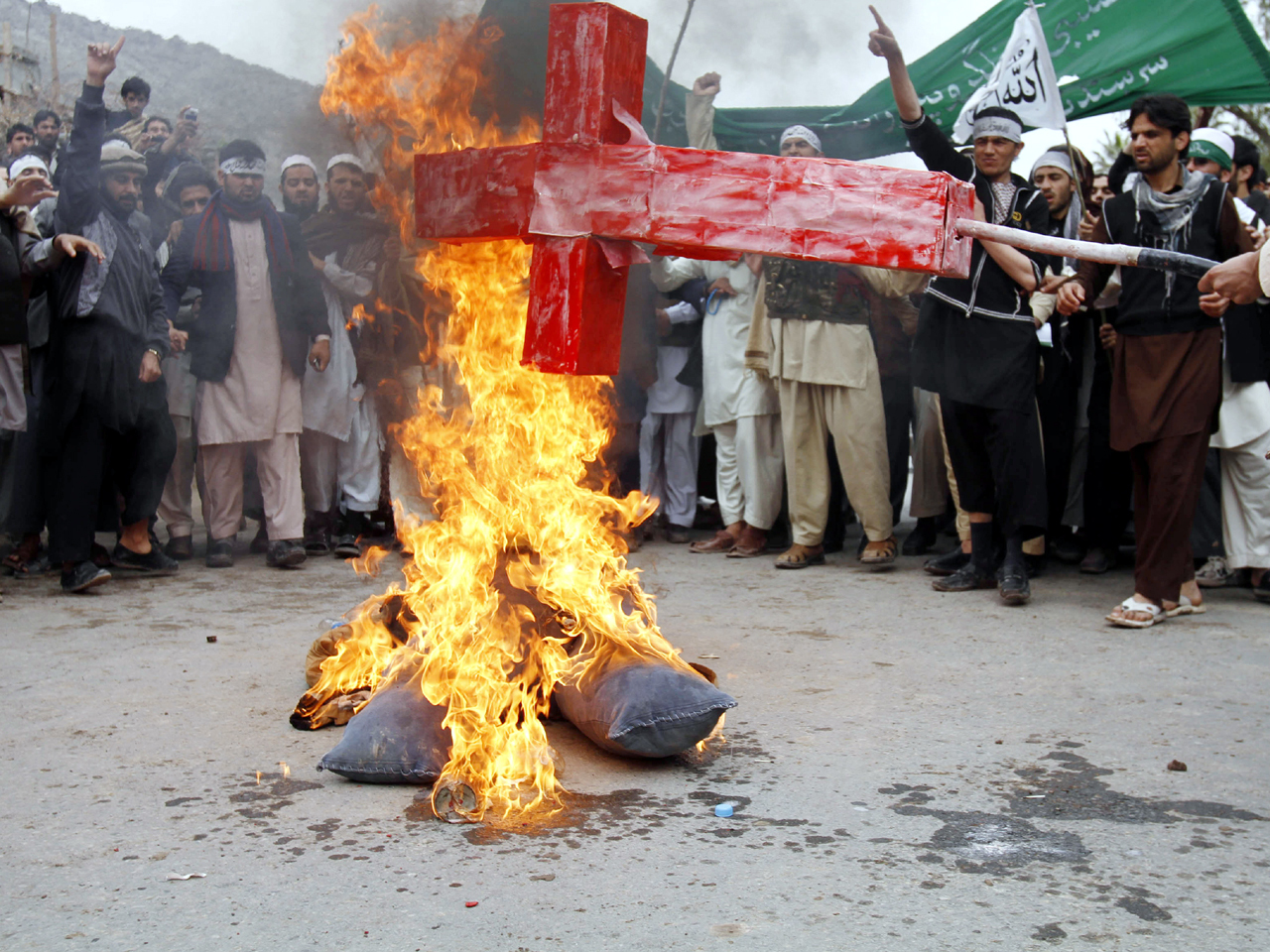 Qayum and Shah Wali Karzai and other top Afghan officials in their delegation escaped in their cars unharmed from the ambush in the country's south.

CBS News correspondent Mandy Clark reports that one Afghan soldier was killed in the attack.

The soldier was protecting the two men as part of a high-level government delegation that was visiting one of the two villages where the killings took place. He was shot in the head almost instantly and died.

Two other Afghan army personnel were wounded in the 20-minute firefight that ensued in one of the two villages in Kandahar province where the killings had occurred two days before.

The gunbattle came as images of the aftermath of Sunday's killings spread across the country, and the public reaction — which at first seemed surprisingly muted — began to build.

In the east, students staged the first significant protest in response to the killings, raising concerns about a repeat of the wave of violent demonstrations that rocked the nation after last month's burning of Korans by troops at a U.S. base.

Burning an effigy of President Obama and chanting "Death to America," the protesters in the city of Jalalabad demanded the U.S. soldier face a public trial in their own country, Clark reports.

The incident has also added to pressure in the U.S. to get out of Afghanistan more quickly. Defense Secretary Leon Panetta, speaking to reporters on the plane traveling to Bishkek, Kyrgyzstan, said the military withdrawal was still on schedule to finish by 2014.

Panetta said he was awaiting plans from Gen. John Allen, the top commander in Afghanistan, to bring home the remaining 23,000 U.S. troops sent to Afghanistan during the 2009 surge. Those forces are due to leave by the end of September, dropping the U.S. presence in the country down to 68,000 troops.

On Tuesday, Mr. Obama issued his strongest condemnation of the shooting.

"The United States takes this as seriously as if it was our own citizens and our own children who were murdered," Mr. Obama told reporters in Washington.

"I can assure the American people and the Afghan people that we will follow the facts wherever they lead us, and we will make sure that anybody who was involved is held fully accountable with the full force of the law," he said.

Taliban spokesman Qari Yousef Ahmadi claimed responsibility for the attack on the delegation in Balandi village in Panjwai district, an area considered the birthplace of the militant group. Previously, the movement had vowed to behead those responsible for the shootings.

The militants rode to the village on motorcycles, police said. They ambushed the delegation from the cover of a distant row of trees. Afghan security forces fired back, killing three militants, said Gen. Abdul Razaq, the Kandahar police chief. The two Afghan army personnel who were wounded included a soldier and a military prosecutor, he said.

Qayum Karzai sought to play down the ambush. He said the delegation, which also included Kandahar Gov. Tooryalai Wesa and Minister of Border and Tribal Affairs Asadullah Khalid, had been giving their condolences to the victims' families. They then heard "two very, very light shots."

"Then we assumed it was the national army that started to fire in the air," said Karzai.

Nine of the 16 civilians killed on Sunday in Balandi and Alkozai villages were children and three were women, according to the Afghan president. Some of their bodies were burnt after they were killed.

The U.S. has an Army staff sergeant in custody who is suspected of carrying out Sunday's pre-dawn killings but has not released his name.

Villagers have described the gunman stalking from house to house in the middle of the night, opening fire on sleeping families and then burning some of the dead bodies.

Witnesses interviewed by The Associated Press after the attack described only one shooter, and U.S. officials have been adamant that there was only one soldier involved.

On Tuesday, villagers who testified to the delegation insisted there were two soldiers, citing relatives who survived the attacks.

Mohammad Wazir, who was away from his home in Balandi village that night, said his sister saw two U.S. soldiers enter the house and start shooting. Everyone started running different directions, and she ran to the kitchen to hide. When the gunfire ended and she re-emerged, 11 of her relatives were dead.

In Alkozai to the south, a man named Sayed Jan said his cousins told him that they saw two soldiers come into his house and start firing. Jan's relatives barricaded their door and snuck out another exit. Jan was away in Kandahar city that night.

The villages are about 40 miles southwest of Kandahar city.

The villagers' anger was evident in discussions with the visiting officials before the attack cut the visit short.

"Today, the Kandahar governor was trying to explain to the villagers that he was only one soldier, that he was not a sane person and that he was sick," said Abdul Rahim Ayubi, a Kandahar lawmaker who was part of the delegation.

"But the people were just shouting and they were very angry. They didn't listen to the governor. They accused him of defending the Americans instead of defending the Kandahari people," Ayubi said.

The delegation did manage before the shooting started to pay out compensation to family members of the victims — $2,000 for each death and $1,000 for each person wounded.

In the eastern city of Jalalabad, meanwhile, hundreds of students staged the first significant protest in response to the tragedy, shouting angry slogans against the U.S. and the American attacker.

The killings have caused outrage in Afghanistan but have not sparked the kind of violent protests seen last month after American soldiers burned Muslim holy books and other Islamic texts.

But the students protesting at a Jalalabad university, 80 miles east of the capital Kabul, were incensed.

"Death to America!" and, "Death to the soldier who killed our civilians!" shouted the crowd.

Some carried a banner that called for a public trial of the soldier, who U.S. officials have identified as a married, 38-year-old father of two who was trained as a sniper and recently suffered a head injury in Iraq.

In addition to burning an effigy of Mr. Obama, protesters set fire to a cross to show their disgust for the Christianity they associated with the United States.

"The reason we are protesting is because of the killing of innocent children and other civilians by this tyrant U.S. soldier," said Sardar Wali, a university student. "We want the United Nations and the Afghan government to publicly try this guy."

Taliban spokesman Zabiullah Mujahid said in a statement that the soldier should be tried as a war criminal and executed by the victims' relatives.

Mr. Obama has expressed his shock and sadness and extended his condolences to the families of the victims. But he has also said the horrific episode would not speed up plans to pull out foreign forces, despite increasing opposition at home to the war in Afghanistan.

Photographs of dead toddlers wrapped in bloody blankets in Panjwai started to make the rounds in Afghanistan on Monday. The images were broadcast on Afghan TV stations, and people posted them on social network sites and blogs.

If the protests against the recent killings spread and become violent it could further complicate the issue, said Malcolm Chalmers, a professor of security policy at Kings College in London.

"My instinct is that it (the killings) will not have much influence on the pace of withdrawal," said Chalmers. "But if you see riots in Kandahar and Kabul and other cities, that could change."

In the aftermath of the Koran burnings last month, over 30 people were killed in the protests and Afghan forces turned their guns on their supposed allies, killing six U.S. service members.

The Korans and other Islamic books were taken from a detention facility and dumped in a burn pit because they were believed to contain extremist messages or inscriptions. A military official said at the time that it appeared detainees were exchanging messages by making notations in the texts.

U.S.-Afghan strains appeared to be easing as recently as Friday, when the two governments signed an agreement to gradually the transfer of Afghan detainees to Afghan control — a key step toward a pact to govern U.S. forces in the country after most combat troops leave in 2014.

After the shooting, Afghan lawmakers called for a halt to negotiations on a bilateral pact with the U.S. until the soldier behind the shooting faces trial in Afghanistan.

The soldier, who has been in the military for 11 years and served three tours in Iraq, was being held in pretrial confinement in Kandahar by the U.S. military while Army officials review his complete deployment and medical history, Pentagon officials said.

Panetta said Monday that the soldier may face capital charges.

Allen told CNN on Monday that the soldier did not leave his base undetected. An Afghan soldier saw him go and reported this to the Americans, who did a head count and realized that the suspect was missing. The Americans formed a search party, but Allen did not describe what happened after that.

Other U.S. officials have said initial reports indicate the soldier turned himself in after the shootings.

The soldier was deployed to Afghanistan on Dec. 3 with the 2nd Battalion, 3rd Infantry Regiment of the 3rd Stryker Brigade, 2nd Infantry Division, based at Joint Base Lewis-McChord located south of Seattle, according to a congressional source, speaking on the condition of anonymity because of the sensitivity of the matter.

He was sent on Feb. 1 to Belambai, the base located a half-mile from one of the villages that was attacked, the source said.

A U.S. military spokesman in Kabul said he was responsible for providing base security.