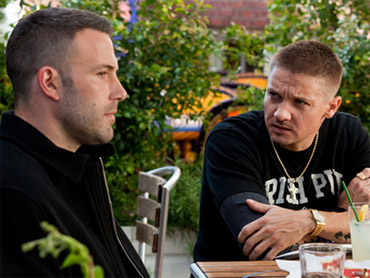 The intense Warner Bros. drama about bank robbers in an insular section of Boston earned rave reviews. This is the second movie directed by Ben Affleck, who stars alongside Jeremy Renner, Rebecca Hall, Jon Hamm and Chris Cooper.

It was a crowded field this weekend as the fall film season began in earnest: Three other movies opened nationwide, with several more in limited release.

The high-school comedy "Easy A" from Columbia Pictures came in second place with $18.2 million, according to Sunday estimates. And the Universal Pictures thriller "Devil" from producer M. Night Shyamalan, about strangers trapped in an elevator, landed in third with $12.6 million.

Most box-office projections showed "Easy A" coming out on top. But as Warner Bros. distribution chief Dan Fellman explained, everything came together for "The Town" over the past 10 days, including playing well at the Toronto International Film Festival.

"The campaign was always great. We positioned it to open in early fall. We had confidence in the movie - we felt if we could get in early and give it an opportunity to run, it would," Fellman said. "It performed extremely well, had great word of mouth and good reviews."

Sort of "The Scarlet Letter" set in a Southern California high school, "Easy A" stars Emma Stone in a hugely charismatic performance as a whip-smart student who takes pity on geeky guys by letting them say they've had sex with her. Eventually she wears this pseudo-promiscuity like a badge of honor.

"She really, really is on her way," Rory Bruer, Sony's president of worldwide distribution, said of the 21-year-old Stone. "For us, this is the third movie we've had her in, and whether it's 'Zombieland' or 'Superbad,' she's a great comedienne."

Plus, "Easy A" cost just $8 million to make, Bruer said, "so it's already an incredible success for us."

The critical and commercial success of "The Town" shows Affleck's directorial debut, the Oscar-nominated "Gone Baby Gone" from 2007, was no fluke, said Hollywood.com analyst Paul Dergarabedian.

"Ben Affleck is taking a page right out of the Clint Eastwood handbook. Obviously, he was known for being an actor but he's very quickly gaining a reputation as a first-class director. He's made a great movie," Dergarabedian said. "His acting comes under fire every once in a while, but he was really good. He's surrounded himself with the best possible people, and the adult drama is back."

In four theaters, Fox Searchlight's "Never Let Me Go" made $120,830 in its first weekend for a strong per-screen average of $30,208. The sci-fi drama starring Carey Mulligan, Andrew Garfield and Keira Knightley has made $165,331 since opening Wednesday.

And playing in 12 theaters, the documentary "Catfish" opened with $255,000 for the weekend, or a per-screen average of $21,271. From Universal's Rogue label, "Catfish" follows a mysterious online relationship that develops between a New York photographer and a family in Michigan.