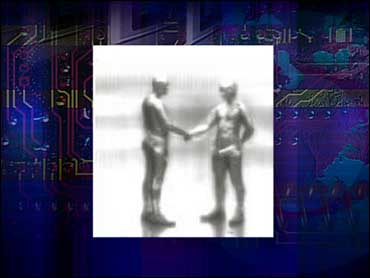 When my eyesight started going soft around 40, I discovered I was not alone. Nearly everyone who has joined this aging demographic also needs reading glasses. My theory is that our species has developed this sudden softening of focus as we age in order to make everyone and everything look a little better than it actually is.

While pondering the clarity and sharpness my eyes have lost, naturally, I turn to technology to find new ways of seeing. My fabulous IBM T40P laptop (I will talk more about you some other time, my sweet darling) has this great magnifying hotkey now: click two buttons and the screen type is enlarged and readable again! However, technology is doing more: It is fundamentally raising our expectations about what we can see. Obviously, magnification is wonderful, but advances in technology are now democratizing and greatly improving our view of relatively unexplored portions of the spectrum. Technology allows us new ways of seeing. So let us look at a few eye-popping vision technologies: night vision, infrared, and (weirdest and most wonderful) passive millimeter wave.

ITT Night Vision Technology
The Gulf War again brought us pictures of nightly battles illuminated as if by day. Viewers routinely associate green and grainy images to mean that in the danger of darkness, action and adventure can miraculously be in sight. Much of the early image intensification technology has come from ITT Night Vision.

After much begging, they kindly loaned me their latest night vision monocular, ITT's PVS-14. This is among their finest handheld products and the quality is so sharp and bright, sale of the units is restricted to military and law enforcement only. I brought this unit out on a moonless night to an island and the view was astonishing. Most "Generation III" night vision devices are astonishingly bright in darkness. What sets this new ITT unit apart from competitors is the enhanced sharpness, brightness, and almost instant adjustment to sporadic light that is likely to exist in even the most dangerous of nighttime environments. Usually a flash of moonlight or car lights or a flame in the distance overpowers these delicate devices. But the popularity of this new PVS-14 device is in its remarkable ability to quickly adapt to the light changes: giving viewers a continuously clear daytime view in near total darkness. Since this unit is restricted and costs $3,000 to $4,000 dollars even if you were allowed to buy it, you may be wondering why I mention it. That is because similar but slightly more timid units are available from ITT and other companies at a fraction of the price. And wait a few months, as I will, until the Generation IVs and V's go on the market, and many of us will have our own "instant daylight" in our pockets. ("Mine" went back to the police training folks, darn it!)

Raytheon's X100 Thermal Imaging Camera
The terrific fellows from the U.S. Army's Fort Knox training facility once kindly left me alone for six hours in their M1A2 main battle tank simulator. What you quickly learn is that of your three choices of scopes (visual, night vision, and infrared), infrared is better and cooler. Literally, cooler: The infrared scope on the M1A2 requires cooling a metal plate down to near absolute zero to make the optics so astonishingly clear. With infrared devices, you are not looking at light; you are seeing heat. Raytheon, makers of extremely high-end infrared scopes kindly caved in to my request to borrow their X100 thermal imaging camera. Raytheon makes this portable, waterproof, and relatively inexpensive X100 infrared camera mostly for law enforcement and fire fighters to aid in searches. (It still costs several thousands of dollars, so it is not what could be called an "impulse buy.")

Police helicopters use infrared cameras at night, for example, to locate burglars' cars by searching for the "hot" vehicles where their hot engines can clearly be seen from high above. It was astonishing to find deer in the middle of the night hiding behind bushes, detected purely by their heat signature. Border patrols and prison guards use these devices to detect illegal migrants and fugitives hiding in thick foliage. Similar devices were used in airports in South East Asia to quickly determine whether travelers had elevated temperatures during the recent SARS outbreak.

Nightdriver
Now, Raytheon has teamed up with the Hummer to market a new heads-up display featuring infrared viewing. With the H2 Nightdriver option, car owners will begin having the advantage of seeing animals, people and cars they might not have seen just using their ordinary vision. Often, blinding light obscures bicyclists or pedestrians in the way but with the assistance of infrared technology, surprise obstructions and dangers are more easily seen.

Passive Millimeter Technology
Earlier, I mentioned that my favorite new "way of seeing" uses something called "passive millimeter waves." All matter emits frequencies and, by tuning a special device, human frequencies can be measured and displayed. Instead of passing through magnetometers or even x-ray machines in public places, it is likely that within a decade passive millimeter wave cameras with sophisticated weapons detection capabilities will be used instead.

Intelligence agencies and military contractors have been working for several years developing such devices. Recently, Boston-based Millivision and Orlando-based Brijot company have both devised camera technologies that, fundamentally can find weapons through clothing. If you are concerned that simple technology can strip you bare, well, not exactly. There's actually no theoretical reason why these cameras couldn't, it's just ridiculously inefficient and expensive to make these sensors so invasive. These camera devices would be paired with software that identifies threatening objects hidden on a person such as guns, knives or explosives. In that context, modesty takes a distant second to security any day.
By Daniel Dubno