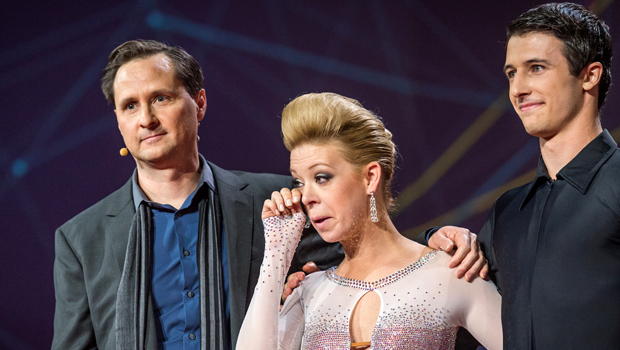 BOSTON -- Despite losing part of her left leg in the Boston Marathon bombing last year, a professional dancer is back on stage.

Adrianne Haslet-Davis, 33, from Boston, performed for first time since being injured on Wednesday at the 2014 TED Conference in Vancouver, British Columbia.

Wearing a white, sparkling short dress, Haslet-Davis showed off her new high-tech prosthetic leg as she twirled across the floor with dance partner Christian Lightner to a shortened version of "Ring My Bells" by Enrique Iglesias.

"I'm thrilled to have danced again," Haslet-Davis said statement released after her performance. "I was always determined to dance again, and I knew that I had to, that I would, and here I am," she said.

Haslet-Davis and her husband, Air Force Maj. Adam Davis, are among the more than 260 people who were injured at the finish line of the 2013 Boston Marathon.

Hugh Herr, director of biomechatronics at the Massachusetts Institute of Technology, said at the online conference he started designing the bionic leg specifically for dancing after visiting Haslet-Davis in the hospital. Herr, himself a double amputee, said he wanted the dancer to be able to get back to what she loved doing.

"A human being can never be broken," Herr said at the conference.

Herr lost both legs in a climbing accident in 1982, and climbs today with his own personally designed legs.

Herr said he spent hours in the lab studying dance to see what movements and forces were needed to create the prosthetic for Haslet-Davis.

Haslet-Davis said she hopes to dance publicly again soon on "Dancing with the Stars."

After finishing her performance, Haslet-Davis sported a huge smile, wiped a tear from her eye and took a bow.