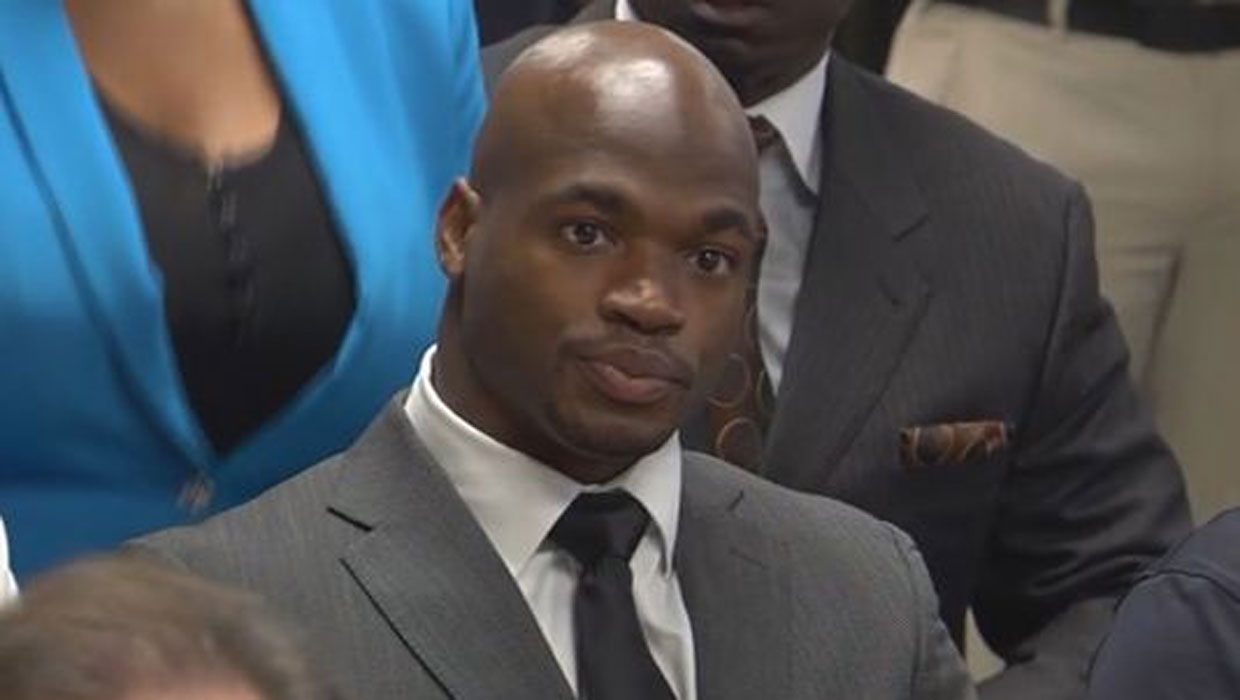 Adrian Peterson, the star Minnesota Vikings running back who had been facing child abuse charges, has been suspended by the NFL for the remainder of the 2014 season without pay.

The league said it informed Peterson in a letter from Commissioner Roger Goodell that he will not be considered for reinstatement before April 15.

The league said it suspended Peterson "for violating the NFL Personal Conduct Policy in an incident of abusive discipline that he inflicted on his four-year-old son last May" - the first example of the league's crackdown on players involved with domestic violence.

The NFL Players Association quickly announced its plan to appeal, sharply rebuked the league's alleged inconsistency and unfairness in the process. The NFL's words were even stronger, with a nearly 1,600-word statement spelling out his path to a return to the field and describing the reasons for the punishment.

Peterson pleaded no contest Nov. 4 to misdemeanor reckless assault in Texas for injuries to his 4-year-old son with a wooden switch. The All-Pro running back says he never intended to harm his son and was disciplining him in the same way he had been as a child growing up in East Texas.

The boy suffered cuts, marks and bruising to his thighs, back and on one of his testicles, according to court records.

Peterson was on a special exempt list at the sole discretion of NFL Commissioner Roger Goodell, essentially paid leave while the case went through the legal system.

The NFLPA said Peterson was told that would count as time served for any suspension levied, citing an unnamed NFL executive. League spokesman Brian McCarthy said by email the stay on the exempt list was taken into account.

"There were aggravating circumstances that led to the discipline announced," McCarthy said.

In his letter to Peterson, Goodell hinted at what those aggravating circumstances might be: "You have shown no meaningful remorse for your conduct. When indicted, you acknowledged what you did but said that you would not 'eliminate whooping my kids' and defended your conduct in numerous published text messages to the child's mother. You also said that you felt 'very confident with my actions because I know my intent.' These comments raise the serious concern that you do not fully appreciate the seriousness of your conduct, or even worse, that you may feel free to engage in similar conduct in the future."

As part of his plea agreement in the case, Peterson will pay a $4,000 fine, perform 80 hours of community service, and be placed on deferred adjudication for two years, CBS Dallas-Forth Worth reported.

The case revived a debate about corporal punishment, which is on the decline in the U.S. but still widely practiced in homes and schools.

Peterson's salary for the season was $11.75 million. He will keep the pay accrued while on the exempt list.

According to Darren Rovell of ESPN, if the suspension holds, Peterson will lose just north of $4 million. And according to Rovell, Peterson has been given paid leave of more than $7.6 million.

Peterson's agent, Ben Dogra, told The Associated Press he and his client were scheduled for a conference call Tuesday with the NFLPA to discuss options.

"We look forward to filing an immediate appeal and coming to a resolution for Adrian Peterson that would be appropriate under the circumstances," Dogra said.

The Vikings don't practice Tuesdays. The organization issued a brief statement: "We respect the league's decision and will have no further comment at this time." The organization also stands to lose money if the suspension holds and they cut him after the season.

Goodell announced on Aug. 28 that the league would toughen punishment for players involved with domestic violence. That action stemmed from a torrent of criticism for the initial leniency toward Baltimore Ravens running back Ray Rice following a caught-on-camera knockout punch of the woman who is now his wife.

The Vikings (4-6) have six games left this season. The league's enhanced policy calls for a six-game suspension for first offenses of assault, battery or domestic violence. Aggravating circumstances warrant higher levels of discipline, and Goodell's letter to Peterson spelled that out.

Goodell pointed to the child's age and the significant physical difference between Peterson and his son.

"Further, the injury inflicted on your son includes the emotional and psychological trauma to a young child who suffers criminal physical abuse at the hands of his father," Goodell wrote. "Second, the repetitive use of a switch in this instance is the functional equivalent of a weapon, particularly in the hands of someone with the strength of an accomplished professional athlete."

As part of his path to reinstatement, the NFL is insisting Peterson meet with Dr. April Kuchuk of the NYU Department of Psychiatry before December 1, 2014, reports CBSSports.com' Will Brinson. Kuchuk will design a counseling and therapy program for Peterson after that meeting to be shared with the commissioner and NFLPA. If he does not adhere to that program, he could face a lengthier suspension, Goodell warned.

The union has accused the league of overstepping bounds spelled out in the collective bargaining agreement.

"The decision by the NFL to suspend Adrian Peterson is another example of the credibility gap that exists between the agreements they make and the actions they take. Since Adrian's legal matter was adjudicated, the NFL has ignored their obligations and attempted to impose a new and arbitrary disciplinary proceeding," the NFLPA said.